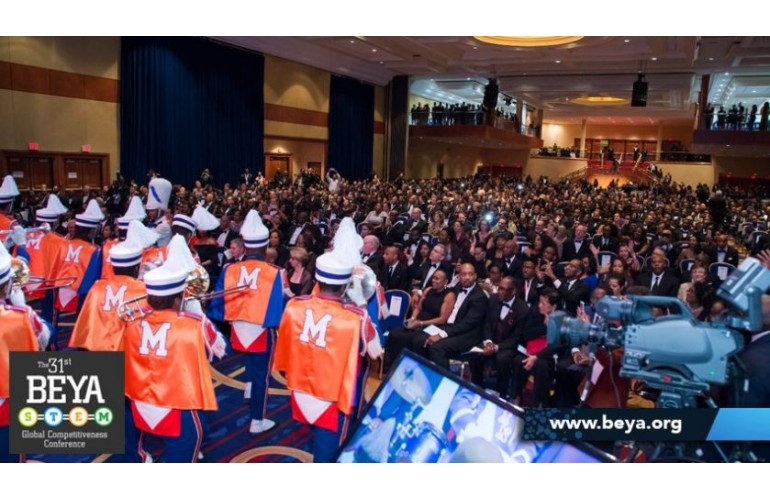 The total number comes from adding the number of registered people with unique access badges.

Next year, the conference hopes to meet and surpass this target.

By December, Career Communications Group, the company behind the BEYA STEM Conference and US Black Engineer magazine, is already halfway to the target goal through its integrated JobMatch service, campus links, and focal points in scientific, technical, and manufacturing organizations.

This year, student numbers sat at more than 4,690.

Of that total, more than 58 percent were male and 41.7 percent female.

College seniors comprised more than 35 percent of the undergraduates, with juniors making up 26 .2 percent, sophomores, 15.5 percent, and freshmen at 10.5 percent. Graduate students came in at 8.9 percent.

The career fair, which features the largest employers of scientists and engineers in America, is the biggest draw for students.

Employers, recruiters, and hiring teams met with thousands of students over the two-day job fair, providing valuable onsite resources designed to enhance job search and tools for a successful career.

“ As a result of showcases like the Design Challenge and youth-centric programming, Corning is reconsidering our long-standing practice of not having a recruiting presence at BEYA (due to its proximity to NSBE),” said Dr. Mark D. Vaughn in an e-mail. Vaughn is technical talent pipe-lining manager at Corning and is responsible for the technology office that assesses personnel needs and utilizes resources for science and engineering education and support.

BEYA’s pre-college program presented an opportunity to connect with science and technology programs that are working to build America’s next generation workforce. The number of participants was 1,706.

Lockheed Martin Corporation, co-host of the annual BEYA STEM Conference for more than 30 years, “did very well at making offers at BEYA this year,” said Scott Trapp of the career fair.

“The initial feedback was that the students were stellar! I can attest to the caliber of talent, better to get them early rather than later,” Trapp said.

The job fair was also the place to sample new technologies and be exposed to industry best practices.

With numbers as high as 4,500 registered inBEYA 2018, more than 74 percent came from corporate America, and 26 percent in the military.

AMIE is a non-profit organization whose purpose is to expand corporate, government, and academic alliances to implement and support programs to attract, educate, graduate and place underrepresented minority students in engin

Gen Wilson is one of the founding fathers of the Black Engineer of the Year Awards (BEYA) Conference Stars and Stripes Veterans Program.