BEYA Scientists – Where Are They Now? 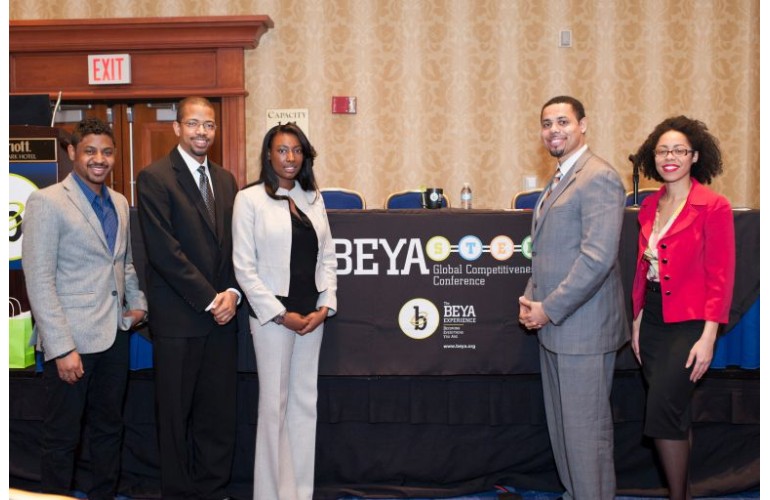 In 2013, Aisha Bowe (in white) led a panel on science at the BEYA STEM Conference. The scientists and engineers included Raymond Gilstrap (in dark suit) a NASA engineer, who is focused on technologies for NASA scientific research and mission support; a White House policy fellow, and a Department of Energy scientist. Over the next couple of weeks, we will spotlight diverse faces of science and what they have been doing since 2013.

Aisha Bowe is an aeronautical engineer. She won a Special Recognition Award at the 2013 BEYA STEM Conference for work in Next Generation Air Transportation focused on developing methods to maintain safe separation of air traffic and fuel consumption within an automated system.

In 2013, she also co-founded STEMBoard, a technology solutions company.

The engineers and programmers of STEMBoard are experts in mobile web development and device programming. They are aerospace and defense engineers that led change within the federal government. They have developed algorithms in support of flight control and air traffic automation and worked on problems in material engineering especially when they involve extreme environments.

The team has spearheaded the architectures for the first cellular base-stations deployed to Afghanistan, demonstrating that real-time biometric with the use of wearable devices is possible, and reducing the size, weight, power and cooling of Cloud processing with stream processors. They are also skilled in real-time applications that span Cyber and C4ISR and big-data processing for use with massive databases.

As CEO, Aisha leads development, expansion, and management of STEMBoard’s multi-million defense-contracts and private sector clients. She has oversight of defense work at STEMBoard, a protege company within the mentor-protege program in the Department of Defense.

The DoD Mentor-Protege Program is the leading program within the federal government for the transformation of a small business firm with high potential to a firm able to perform well as a prime contractor or subcontractor.

Established in 1991, the program helps small disadvantaged businesses (Proteges) compete for prime and subcontract awards by partnering with large companies (Mentors) under individual, project-based agreements. The program is a way to share best practices, enhance skill sets, technology and opportunities for small businesses.

Prior to founding STEMBoard, Aisha was a researcher at the NASA Ames Research Center in California, where she focused on developing methods to improve air traffic management to make air travel safer, cheaper and more efficient. Aisha has authored or co-authored several research papers on aircraft trajectory prediction uncertainty and optimization of fuel consumption.

Since 2013, Aisha Bowe has made it her mission to close the achievement gap by empowering minority youth in #STEM to become the industry’s future STEMBoard collaborates with Historically Black Colleges and University’s and hosts STEM camps executed by STEMBoard subject matter experts.

Aisha holds a bachelor’s in Aerospace Engineering and a master’s in Space Systems Engineering from the University of Michigan.