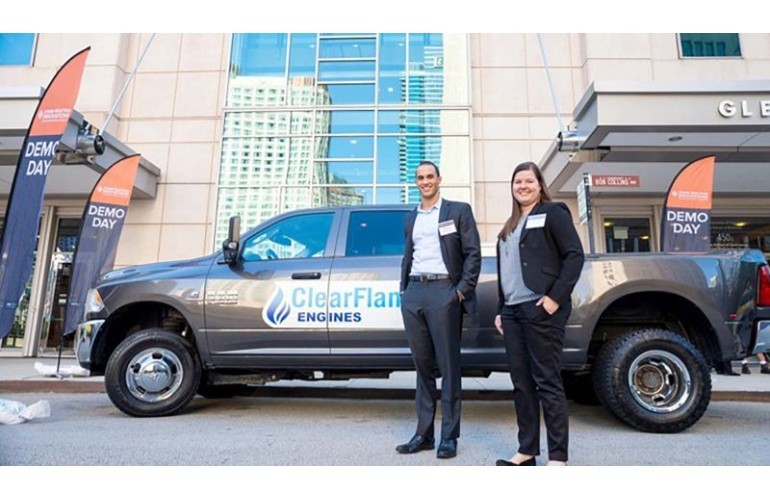 Dr. BJ Johnson is an expert in the combustion of low-soot alternative fuels, and his dissertation research forms the basis of ClearFlame’s central IP.

My parents instilled in me early on that if you have the ability to do something about a problem, it is your responsibility to help address it. One comic book superhero put it this way: “With great power comes great responsibility.” I realized many years ago that I have the tools I need to impact a problem facing humanity: our climate. I was born with some of those tools; others came as a result of significant resources poured into me by family, mentors, and friends. The world has given me the tools to address one issue, and I intend to pay it back.

In my late high school and early college years, I developed an interest in physics as a field. It fascinated me that we can understand how the world works with numbers and equations. Around this same time, climate change became a central focus for almost everyone. The obvious merger between those two points for me as a student at Stanford University was energy. I was fortunate to get a thesis project with a professor adviser at Stanford who played to my interest in energy and making engines cleaner and more efficient. The culmination of my studies ultimately became ClearFlame Engine Technologies.

ClearFlame’s focus on clean energy is two-fold. We want to impact negative elements that affect air quality and serve as irritants to human lungs. This includes air pollution, soot, particulates, smog, and carbon dioxide. We also want to address the issue of equitable clean energy. There has been a significant shift in focus from local air quality pollutants to the global climate challenge. That is problematic because we still have not solved the problem of urban air quality in areas like Oakland or Long Beach, or internationally in places like Shanghai or New Delhi. We cannot get excited about the notion of pivoting the entire world into thinking about climate when Black residents in Chicago have a nine-year lower life expectancy versus white residents in large part because of the lower air quality in areas where they live. These problems have to be solved at the same time. The good news is, they can be.

ClearFlame exists because we believe everyone should have clean air. They should not have “access” to it; clean air is a basic human right. Everyone also should have access to the energy that comes with it because it is important to a person’s quality of life. It is a false dichotomy to say we simply need to be reducing energies. Of course, we do. However, there are a billion people on this planet that do not have basic electricity. We need to expand energy use in a clean and sustainable way. At the same time, we need to reduce polluting energy outputs from the higher-wealth regions of the world. This is another layer of equitability: not just providing people clean air, but also providing access to energy in a way that’s fair to everyone.

Our mission at ClearFlame has been to prove we can provide a decarbonized, sustainable, alternative diesel solution for heavy-duty applications. And we wanted to do this in a way that does not fundamentally change the way people get their jobs done. We did not want to ask them to spend money on expensive solutions or many of the other things that could potentially limit the expansion of sustainable solutions. ClearFlame can offer all the sustainability and practicality at the same time. It does so by leveraging the attributes of the existing diesel engine that have made it so successful around the world, while simultaneously addressing the specific aspects of the engine that lead to harmful emissions.

In a sentence, ClearFlame takes the “diesel fuel” out of the diesel engine and allows it to use clean-burning fuels. The practicality, look, and function of the diesel engine remain the same, however. Mechanics who maintain these engines around the world and people who operate this equipment will continue to be familiar with it. Our solution preserves the human knowledge base around diesel-fueled machines. The only difference with ClearFlame is that these same machines will now help improve people’s quality of life.

Contrary to recent popularized public sentiments, improved air quality is not a political issue, and one of my missions is to fight back against that falsehood. No one thinks improving air quality is a bad thing. That type of thinking does exist around the subject of climate change, though. I do not think the scientific community has done an adequate job of explaining to the common man the detrimental costs of climate change and why it matters. I also believe we have not done a great job of discussing the different ways we can solve this problem. Because of these shortcomings, I think many people are afraid that we are asking them to give up their ways of life when we speak about ways to impact climate change. That is NOT what ClearFlame is asking anyone to do. It is not what the world should be asking anyone to do. I want to make that extremely clear. Climate change is a problem, and there is a way to solve it that should not evoke fear, period. If we can get to that explanation, the politics around the subject will not have a leg to stand on anymore.

ClearFlame has been well-received, though many people have questioned the use of clean fuels when we are also “getting rid of engines.” While there is a strong global movement toward electric vehicles, there is an education that must come with that. If we are serious about making a difference in clean energy quickly, we need to be serious about engaging the problem that exists today and not solely banking on what we hope the world will look like in 10 years. There are 3.5 million diesel trucks on the road today. They are not going anywhere anytime soon. We need to not only start making new trucks; we need to also do something about the old trucks. That is where ClearFlame can and will make an expedient difference impacting air quality.

ClearFlame truly is a win-win solution, though I recognize our product is a major disruptor to a substantial industry. Our goal is not to suggest that anyone is replaced with ClearFlame adoption. But it is imperative, dare I say inevitable, that the industry evolves. The type of technology we are offering can be produced by all the existing diesel manufacturers in the world. And, if they work with ClearFlame, they will continue to do what they have been good at for over 100 years: producing diesel engines. The only difference is those engines will not fundamentally rely on diesel fuel. Some people will be threatened by that message. Again, everyone must be willing to evolve to what the world wants. Right now, the world wants sustainability, and there is a way for traditional diesel engine companies to use their existing core competency and work with ClearFlame to provide worldwide sustainability. This should be an exciting message for them!

Now is the perfect moment to light this flame (pun intended). The last election brought to the forefront our carbon issues and the speed at which these problems are advancing. Our nation shifted to the perspective of the rest of the world, which inevitably centered around one statement: it is “go” time. We at ClearFlame responded to that urgency, put our product on the road, and proved its possibility. Our technical progress lined up exceptionally with what was happening in the market, both politically and commercially. We are finally at a moment in time where people are fed up with not enough being done about climate change and air pollution. We have known this was a problem for over 20 years, yet there has not been a movement to do something significant about it. The movement to take sustainability seriously is young. Until a year or two ago, I am not sure many people would have even cared. We started ClearFlame back in 2016, and for the first three years, we focused our talking points on air quality benefits. Carbon was not a topic that moved the needle in these sectors. Now that it does, it is time to take full advantage of the conversations and present an extremely viable solution.

The collective global vision for our world’s future rests in procuring the resources and energy needed to live our lives the way we want so that we can do our jobs effectively and efficiently. We must decouple those needs from solutions that harm the environment and do not allow us to make the world the same place or better for generations coming after us. ClearFlame is such a solution. Whatever your life is, and whatever you do with it, it either uses energy or can be improved with energy. If we want our children to inherit a world that is better than ours, we all need to make sure we are protecting the environment we have now. I think that is a message we can all get behind.