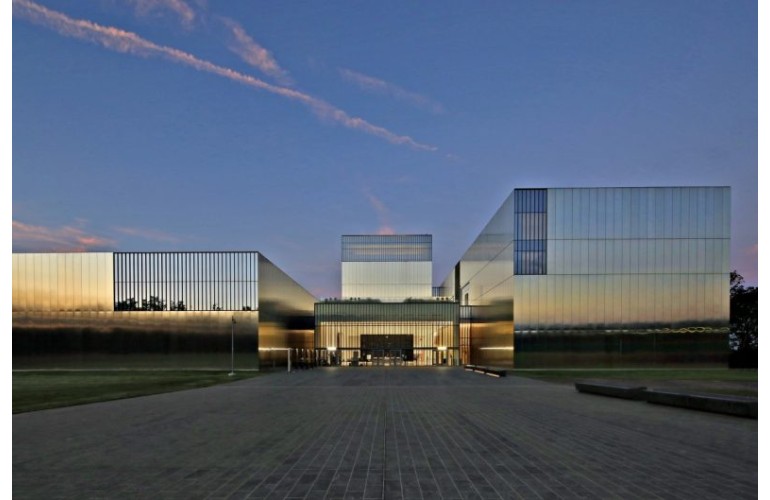 The U.S. Army has announced plans to open the National Museum of the United States Army on Veterans Day, November 11. Located on a publicly accessible area of Fort Belvoir, Virginia, the museum will be the first to tell the  history of the U.S. Army since its establishment in 1775, the statement read.

“The U.S. Army and the American Soldier forged the birth of our nation,” said Secretary of the Army, Ryan D. McCarthy. “The National Army Museum will be a place for members of the total Army family to gather and share their stories, while also creating an opportunity for visitors to connect with our nation’s history through the eyes and voices of individual Soldiers.”

An exterior shot of the National Museum of the United States Army, scheduled to open on Veterans Day, Nov. 11. (Duane Lempke)

The museum’s Experiential Learning Center will provide visitors of all ages a unique opportunity to participate in hands-on, educational and team-building activities in the areas of geography, science, technology, engineering and math.

“The museum is stunning, and it is an honor to present this history in a way that shows the connection between the American Soldier, the U.S. Army and the nation,” said the museum’s director, Ms. Tammy E. Call.

The museum will open with enhanced health and safety measures for visitors. Free, timed-entry tickets are required to manage visitor capacity and provide an optimal experience to visitors.

“We have worked hard to ensure the safety of our staff and visitors, and we are excited to open the doors of this long-awaited national museum,” added Call.

The museum is a joint effort between the U.S. Army and the Army Historical Foundation, a non-profit organization. The AHF constructed the building through private funds, and the U.S. Army provided the infrastructure, roads, utilities and exhibit work that transformed the building into a museum. The Army owns and operates the museum, and the AHF manages retail, catering and special events.

“The Army is people. They are our greatest strength and our most important weapon system,” said the Chief of Staff of the Army, Gen. James C. McConville. “The National Museum of the United States Army is designed to tell the compelling and heroic stories of our people and take visitors on an exciting journey through the history of the U.S. Army as told through the American Soldiers’ point of view.”

The opening is expected o be  livestreamed to encourage people to participate in this historic moment. A link to the livestream will be posted on the museum’s website. For more information, please visit http://www.theNMUSA.org.

The Wounded Warrior Project’s virtual event will be hosted by former NFL quarterback and current football analyst for ESPN Jesse Palmer , and includes musical performances, as well as veteran tributes during the broadcast on Wednesday, Nov. 11 at 11:30 a.m. EST / 10:30 CST / 8:30 PST .