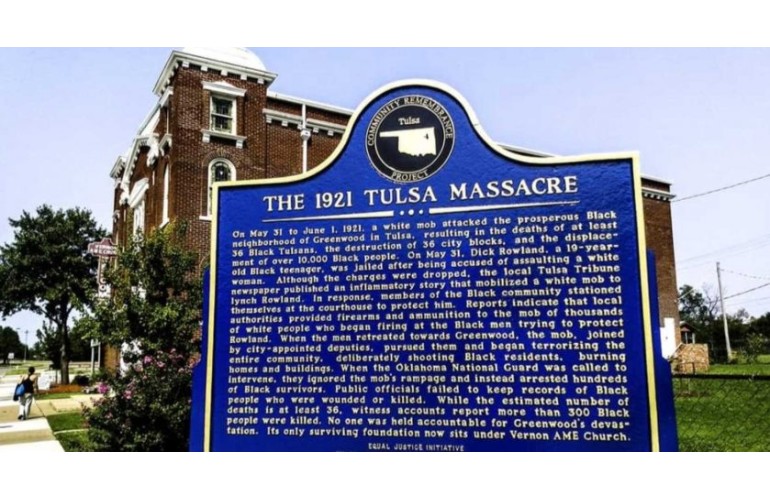 Theresa Jordan has been a member of the Historic Vernon A.M.E. Church for as long she can remember.  The faith and family institution on North Greenwood Avenue in Tulsa, Oklahoma, did a lot more than survive the 1921 aerial bombing and massacre that started on May 31 and ended on June 1, when martial law was declared.

Ten years ago, Theresa started a project with her cousin Edith Taborn to preserve the rich legacy of Black Wall Street.

In 2020, Theresa sat down for an online interview with Ray Kennedy, managing editor of Career Communications Group (CCG). During the conversation, Theresa shared anecdotes about growing up in Greenwood, the assault planes that started the fires before the mass murder, and the domestic terrorists that perpetrated crimes against humanity.

Below are excerpts from the interview.

“Vernon A.M.E. Church under the African American Episcopal Church’s auspices has a rich heritage. It’s the bridge that made us through. I was born into that church, and I go back six generations. Many successful people branched out from that church. People who used their money and success to help families. Tyrone Taborn is a success story—very much part of Oklahoma and Oklahoma history. You can see the legacy and importance of impacting your community.

Many people talk about Greenwood as a street. We were a thriving community. We had (U. S. Army) Soldiers,  (U.S. military) Veterans, and guns. Many white people warned us. For various reasons, a lot of white people helped, but they did not talk about it. White people warned their Black workers that there would be a massacre. Some packed their bags and left. A lot of people died because looters showed up. They call it a riot. But it was not people in their own neighborhood who tore down the community. It was a massacre. I have had a hard time changing the name riot.  The company that owned those planes, what do they stand for? Why are people waiting to say something?

Greenwood was rebuilt. The people who supported the district and put money into it were still there. That is the story that I would like to get out. We were taught about it in elementary school. Those teachers were members of the Vernon A.M.E. Church.

My grandmother was a slave. They lived through lynching. They passed on survivor skills and how to overcome, self-determination, and a roadmap to success. We survived a depression, a massacre, economic distress. A lot of people went to California and were successful. Look at what we did with science,  mathematics, and engineering. Children were accepted into prominent colleges. It’s a legacy of success.”

“I call upon the people of the United States to commemorate the tremendous loss of life and security that occurred over those two days in 1921, to celebrate the bravery and resilience of those who survived and sought to rebuild their lives again and commit together to eradicate systemic racism and help to rebuild communities and lives that have been destroyed by it,” President Joe Biden said in a statement.

According to the White House proclamation, one hundred years ago, a violent white mob raided, firebombed, and destroyed approximately 35 square blocks of the thriving Black neighborhood of Greenwood in Tulsa, Oklahoma. Families and children were murdered in cold blood. Homes, businesses, and churches were burned.

In all, as many as 300 Black Americans were killed, and nearly 10,000 were left destitute and homeless. Before the Tulsa Race Massacre, Greenwood was a thriving Black community that had grown into a proud economic and cultural hub. At its center was Greenwood Avenue, commonly known as Black Wall Street. Many of Greenwood’s 10,000 residents were Black sharecroppers who fled racial violence after the Civil War. In the decades following the Civil War and Reconstruction, Greenwood became a place where Black Americans could make a new start and secure economic progress despite the continued pain of institutional and overt racism.

The community was home to a growing number of prominent Black entrepreneurs and working-class Black families who shared a commitment to social activism and economic opportunity. As Greenwood grew, Greenwood Avenue teemed with successful Black-owned businesses, including restaurants, grocery stores, hotels, and offices for doctors, lawyers, and dentists. The community also maintained its school system, post office, savings and loan institution, hospital, and bus and taxi service.

Despite rising Jim Crow systems and the reemergence of the Ku Klux Klan, Greenwood’s economic prosperity grew, as did its citizens’ demands for equal rights. This made the community a source of pride for many Black Americans. It also made the neighborhood and its families a target of white supremacists. In 2 days, a violent mob tore down the hard-fought success of Black Wall Street that had taken more than a decade to build. In the years that followed, the destruction caused by the mob was followed by laws and policies that made a recovery nearly impossible.

In the aftermath of the attack, local ordinances were passed requiring new construction standards that were prohibitively expensive, meaning many Black families could not rebuild. Later, Greenwood was redlined by mortgage companies and deemed “hazardous” by the Federal Government so that Black homeowners could not access home loans or a credit on equal terms. And in later decades, Federal investment, including Federal highway construction, tore down and cut off parts of the community. The attack on Black families and Black wealth in Greenwood persisted across generations.