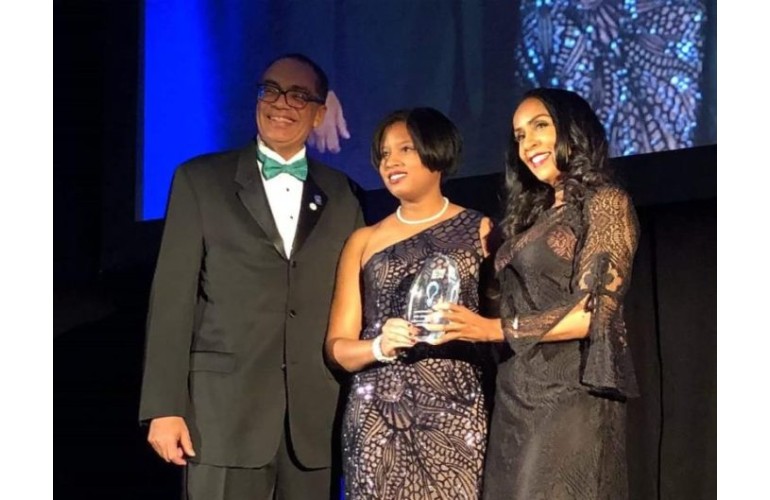 President Biden has reappointed Victor R. McCrary, Ph.D., as a member of the National Science Board, the governing body of the National Science Foundation. A respected science, technology, engineering, and math (STEM) and winner of a number of awards at the BEYA STEM Conference, Dr. McCrary is among the key nominations announced by the White House last week.

In the archive photo, McCrary poses with an award winner and emcee on the podium at the annual Black Engineer of the Year Awards.

As one of the board’s newest members in 2017, McCrary proposed an enterprise-wide initiative to support the “blue-collar STEM” workforce, outlining his rationale in a presentation during a session by the Committee on National Science and Engineering Policy. Blue-collar workers are individuals without 4-year or advanced degrees in science, technology, engineering, and math (STEM) careers.

In September 2018, McCrary wore two hats as vice president of research at Morgan State University and a member of the National Science Board when he took part in the first Congressional Black Caucus Panel on Blue Collar STEM.

Last spring, wearing two hats as NSB’s elected vice chair and vice president for research and graduate programs/professor of chemistry at the University of the District of Columbia, McCrary led efforts to facilitate discussions in the board’s series on the successes of minority-serving institutions in preparing STEM talent. The panel discussion is part of NSB’s efforts to raise awareness about strategies to develop domestic STEM talent, particularly among minority groups.

McCrary is committed to the success of people of color in STEM and represents the views of scientific and engineering leaders in minority-serving institutions. He is a former president of the National Organization for the Professional Advancement of Black Chemists and Chemical Engineers (NOBCChE) and a Fellow of the American Chemical Society.

As the first vice president for research and economic development at Morgan State University, he was instrumental in developing a research strategy at Morgan State, expanding programs via engagement with federal and state agencies (a total of $32 million in 2016), increasing the university’s intellectual property portfolio, and positioning Morgan State as Maryland’s Public Urban Research University.

McCrary also previously served as business area executive for science & technology at Johns Hopkins University Applied Physics Laboratory. He directed over $60 million in investments for basic and applied research projects targeted at national security and space applications. He has authored over sixty technical papers and co-edited two books in his career at AT&T Bell Laboratories and the National Institute of Standards and Technology.

He has also served on numerous committees, including the Intelligence Science and Technology Experts Group of the National Academies of Science, Engineering and Medicine, the advisory board for electrical and computer engineering at The Citadel, and the advisory board of the Applied Research Laboratory at Penn State. He served on the subcommittee for the U.S. Air Force Institute of Technology, the board of the Maryland Innovation Initiative of the Maryland Technology Development Corporation, and the PubMed Central National Advisory Committee for the National Institutes of Health.

McCrary has received several honors and awards during his career, including an Alumni Award for Research Excellence from The Catholic University of America and the Distinguished Alumni Award from Howard University, both anchor institutions in his hometown Washington D.C.

In 1990, the annual BEYA STEM Conference presented McCrary with one of his first career awards as Most Promising Scientist of the Year. Two decades later, he was honored as Scientist of the Year at the same conference that Career Communications Group (CCG) hosts. In 2005, he was featured as one of the Top 50 Minorities in Science by a CCG publication. Other awards he has received include the U.S. Department of Commerce’s Gold Medal in 2000 and the 2002 NOBCChE Percy Julian Award.