2016 Black Engineer of the Year on BEYA Radio 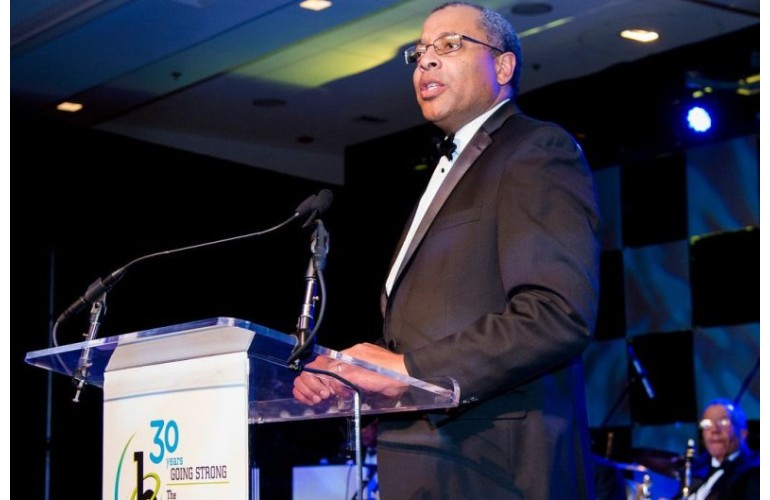 Dr. Christopher Jones, the 2016 Black Engineer of the Year, is at the top of his game  His career exemplifies a focus on a commitment to bring one’s best performance to a  field. Add in a dose of service, which resulted in opportunities and progress not only for him personally but also for his employers, and for the defense and security of the United States itself.  Take a listen.

Let’s start at the beginning. A young Christopher Jones, born in Havre de Grace, Maryland, matriculated at Georgia Tech after finishing high school in 1982, winning appointment as an Air Force ROTC cadet and, not so coincidentally, as a NACME Scholar. He graduated with high honors as an aerospace engineering major and flew away in Air Force blue in 1986.

Here his career took a turn many outside U.S. military circles might not have expected: to assignment as a systems analyst to the Foreign Technology Division at Wright-Patterson Air Force Base in Dayton, Ohio. Fans of shoot-’em-up video games can be excused for failing to see the excitement quotient there, but what the young Lt. Jones actually did was truly exciting for a lot of high-profile U.S. officials.

He analyzed classified data on foreign ballistic missile and space systems at a time when Ronald Reagan’s White House was deeply concerned about missile defense.

Getting Back to “What You Know”

Still focused on the “what you know” part of his career readiness, Jones went back to school, this time for a master’s degree in aerospace engineering, concentrating on flight dynamics and controls, from the University of Dayton. It built on his undergrad study, which was centered on structures and mechanics. Continuing his part-time study while a uniformed professional, Jones also completed a second master’s program in engineering management, which was focused on multi-attribute decision analysis.

Then, double grad degrees in hand in 1991, Captain Jones left the Air Force. Sort of.

He returned to Maryland for the full-time pursuit of a doctorate in aerospace engineering at the Free State’s College Park flagship. There, he investigated flight mechanics and control issues, developing a thesis on the creation of what his bio describes as “flight dynamics models using frequency-domain system identification.” Take that, all you shoot-’em-up video gamers.

The young doctor-to-be did not neglect his commitment to serve either. While at Maryland, he got active in student government and in minority student organizations and was so successful he won big recognition: Not only was he cited with a University President’s Commission Minority Achievement Award but he also won a 1996 Black Engineer of the Year Student Leadership Award, a sign of things to come.

Putting the Knowledge to Work

That year, Dr. Jones joined Sikorsky Aircraft Corporation’s Acoustics Group, where he supported the development of active noise- and vibration control systems. He participated in and led flight tests and was the Program Leader for government and civilian contracts involving innovative rotorcraft technologies.

For those who don’t think that’s sexy, look again at the reports of the “Stealthed” helicopters used by the U.S. Navy SEAL Team during the assault on terrorist leader Osama bin Laden’s Pakistani hideout.

Keen observers will remember the major advances in vibration- and noise control, as well as low-radar observability “Stealth” techniques developed as Sikorsky and its industry partner, raced to complete work on the revolutionary RAH-66 Comanche attack helicopter before funding was pulled on the program. On that project, from 2000 to 2004, Dr. Chris Jones was the company’s Technology Integrated Product Team Leader, directly applying the knowledge gained in his master’s and Ph.D. studies. So those interested observers may be excused for thinking Dr. Jones, who can’t talk about classified projects, just might have helped advance the state of the art.

In 1997 Dr. Jones dusted off his blue suit and joined the Connecticut Air National Guard’s 103 Air Control Squadron as a Communications Officer. Asked about his dual military and civilian career roles, he said his employer, Sikorsky, was very supportive of Reservists and National Guard members’ military service. It required a lot of “balancing,” he said, such as knowing in advance when and where active-duty deployments might occur and being able to schedule some of his work assignments to avoid major disruptions, but as he said, “You have to be dedicated.”

As the leader of the Connecticut Guard’s Logistics Support Flight, Captain Jones planned and scheduled the work of up to 150 Guard members responsible for installation, maintenance, and repair of the communications, electronics, computer, power, radio, and radar systems for his squadron. He also had to coordinate satellite and telecommunications operations during remote deployments and to serve as a unit liaison with subordinate and commanding organizations for maintenance and communications activities during joint military exercises.

All that activity got Dr. Jones promoted to Lieutenant Colonel in 2001. He supported the unit during Operation Noble Eagle (Homeland Defense) after 9/11, and in 2003 he served as Acting Chief of Maintenance in Afghanistan during Operation Enduring Freedom. There, he led 75 Guard personnel maintaining and operating computer, communications, and radar gear.

Lt. Col. Jones also provided support to members of his National Guard unit, as well as many of his own maintenance organization employees, during U.S. and coalition military operations between 2003 and 2011.

Dr. Jones, who had joined Northrop Grumman in 2004 as Director of Product Support and International Programs for the Airborne Early Warning program, managed personnel located in several U.S. states and in other countries and was responsible for all domestic support of the Navy’s E-2 Hawkeye early-warning plane as well as for international E-2 programs.

Dr. Jones retired from the Connecticut Air National Guard when it became clear that his role in Virginia at Northrop Grumman, far from its New England base of operations, was rapidly expanding. But he didn’t get very far away from serving U.S. military needs.

New Life for an Aging Design

The Hawkeye, originally developed decades ago and designed to operate from upgraded World-War-II-era aircraft carriers as well as their giant nuclear-powered, modern follow-ons, has undergone major revisions and upgrades to continue its viability during its long service life.

Dr. Jones provided technical leadership during aircraft design, development, production, and fielding – including a change from four-bladed propellers to eight blades in the newest versions to reduce vibration and noise to extend the survivability of its extensive onboard electronics suite – and he also was a key member of the business strategy development and capture teams for several strategic wins for an aircraft used by France and other countries as well as the U.S.

He also scored a personal one. In 2012 Dr. Jones was named Black Engineer of the Year for Career Achievement, fulfilling the promise presaged with his Student Leadership Awards.

Standing on the Front Rank

Today, Dr. Jones heads an organization with more than 14,000 professionals working in 49 U.S. states and 16 international locations earning revenues of more than $4.8 billion. He has the responsibility of leading civilian organizations that directly and indirectly support U.S. military and humanitarian operations in North Africa and the Arabian Gulf areas. It’s a fitting position that is closely related to his mission while serving as an officer in the Air National Guard.

One of the only three-sector presidents at Northrop Grumman, Dr. Jones reports directly to CEO Wes Bush and also serves as a member of Northrop’s Corporate Policy Council and is responsible for policy and performance across all parts of the company.

As CEO Bush’s letter to the selection panel states, Dr. Jones’ “Technology Services sector’s customers are engaged on the front lines of U.S. and regional security, irregular warfare, modernization through sustainment, nuclear security, and other activities. Chris represents Northrop Grumman with high-level international and U.S.-based customers, including U.S. government leaders in the departments of Energy, Defense, Homeland Security, and other federal agencies.

“Under his leadership, Technology Services delivers the most advanced training available to warfighters, preparing them for combat deployment. The sector also provides military base infrastructure support and security services around the globe.”

The letter goes on, but all the wargamers out there will get the idea. Dr. Chris Jones’ performance has been so strong for so long that it’s no wonder he’s won selection as the 2016 Black Engineer of the Year.