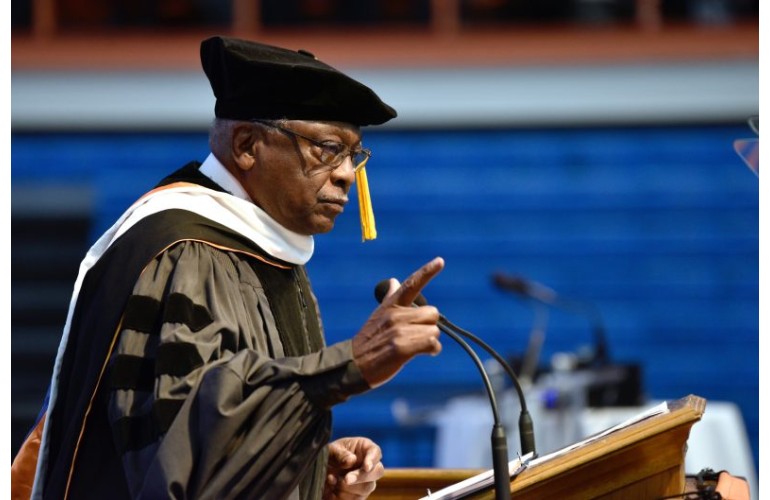 Historically black colleges and universities (HBCUs) may be on break, but the excitement over their landmark fall/winter commencement ceremonies hasn’t stopped. During December, HBCUs conferred degrees on hundreds of qualified candidates. In Maryland, Morgan State University (MSU) held its seventh annual fall commencement exercises and conferred its 800th doctoral degree. According to MSU,  that number included a record 79 doctorates awarded in 2019, the most awarded since the university began offering doctoral degrees.

The keynote speaker at the event was Jesse Russell, who pioneered the development of the cellphone’s wireless technology. Russell received a Black Engineer of the Year Award in 1992 for the best technical contributions in digital cellular and microcellular technology. In his acceptance speech for an MSU honorary degree, he recalled the challenge of working at Bell Laboratories as a new graduate from Tennessee State University in the 1980s, “when it was unpopular for African Americans to be at that institution,” he said.

“As I stand before you and reflect on a meeting at Bell Labs in 1984, where a young man from Tennessee State had the confidence necessary to challenge the teaching of the Bell System of putting phones in places and asked the question, ‘Why not focus on putting phones on people? That idea gave rise to digital cellular technology and ultimately a digital cellular communications industry,” Russell said.

More than 770 graduates participated in Tennessee State University‘s Fall Commencement Ceremony on Dec. 7. According to TSU News, President Glenda Glover presided over the winter graduation that consisted of 513 undergraduates and 260 graduate students.

Prairie View A&M University announced that nearly 600 students graduated in its Fall 2019 Commencement. The event took place on Dec. 14. Students came from all colleges, including Graduate Studies, the College of Business, and the Roy G. Perry College of Engineering.

At Florida A&M University, the Fall Commencement Speaker was Dr. Carla Hayden, shown greeting student graduates, including Demetria Bridgett and her daughter, Tashanti Bridgett who graduated with honors. Dr. Hayden is a Tallahassee native and the first African-American to be appointed Librarian of Congress.

More than 400 graduates crossed the stage in the F.G. Clark Activity Center at Southern University and A&M College during its fall commencement ceremonies. U.S. Secretary of Agriculture Sonny Perdue, who served as commencement speaker, said the graduates were the “real dignitaries of the day.”

University of Maryland Eastern Shore (UMES) declared itself a superstition-free zone when it held its commencement day on Friday the 13th. More than 270 UMES graduates were awarded degrees at UMES’s 23rd winter commencement exercises.