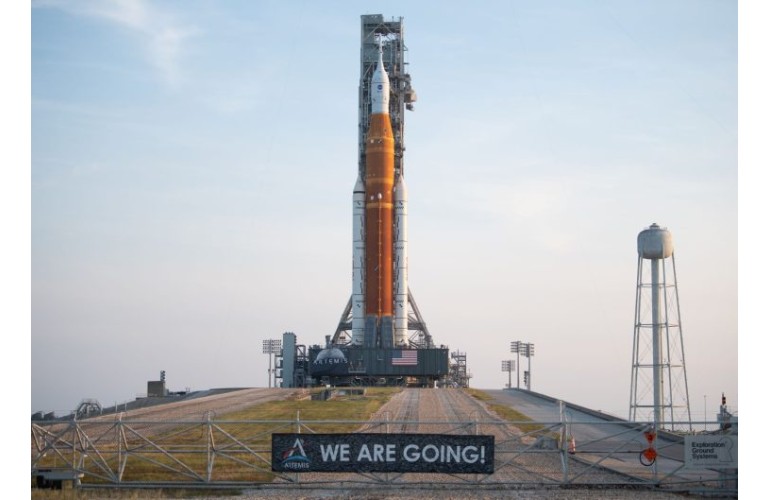 NASA Artemis shared on social media this week that the image of the “We Are Going!” banner is one of the most liked photos of the Space Launch System rocket coming together over the years.⁣

The banner, which is affixed to the gate in the foreground bears the handwritten names of agency employees and contractors who have worked to get the rocket and spacecraft ready for the Artemis I flight test. The photograph was taken by Joel Kowsky⁣.

A separate press release from the space agency announced that Artemis 1, the first mission in the new program of lunar exploration, is scheduled to lift off from Florida’s Kennedy Space Center on Aug. 29.

The launch countdown will begin Saturday, Aug. 27. Live coverage of events will air on NASA Television, the NASA app, and the agency’s website.

Artemis I is the first integrated test of NASA’s Orion spacecraft, Space Launch System (SLS) rocket, and the ground systems at the agency’s Kennedy Space Center in Florida.

This uncrewed flight test around the Moon will pave the way for a crewed flight test and future human lunar exploration as part of Artemis. The SLS rocket is targeted to launch during a two-hour window that opens at 8:33 a.m. EDT Monday, Aug. 29, from Launch Pad 39B at Kennedy. Livestream of the rocket and spacecraft at the launch pad currently is available on the NASA Kennedy YouTube channel.

The first in a series of missions, Artemis I will be an uncrewed flight test that will provide a foundation to extend human presence to the Moon and beyond.

The mission will demonstrate the performance of the SLS rocket and test Orion’s capabilities over the course of about six weeks as it travels about 40,000 miles beyond the Moon and back to Earth.

At 12 a.m. on Monday, NASA coverage begins with commentary on tanking operations to load propellant into the SLS rocket. Launch coverage will continue through translunar injection and spacecraft separation, setting Orion on its path to the Moon.

Through Artemis missions, NASA will land the first woman and the first person of color on the Moon, paving the way for long-term lunar exploration and serving as a stepping stone to sending astronauts to Mars.