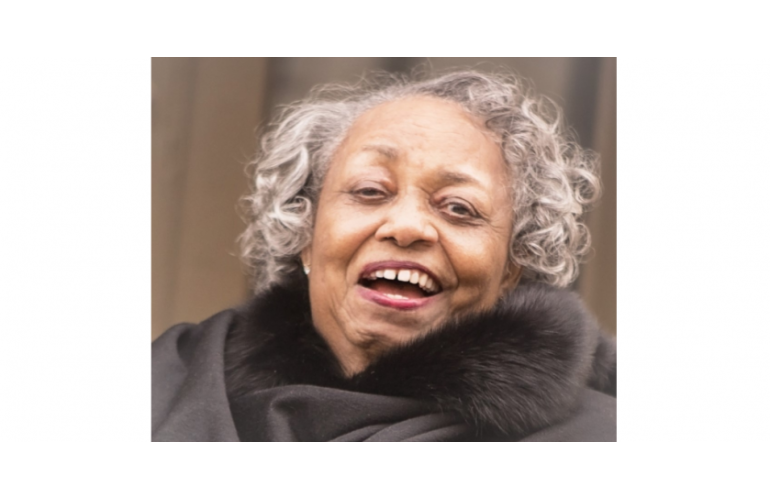 A private funeral was held at Clinton United Methodist Church for immediate family on Thursday, June 25, followed by a private graveside committal service at Antioch Cemetery. Below are photos taken at the funeral service and celebration of her life.

“The creator gets to define his creation,” and so He did with Dr. Dorothy Elizabeth Massingale Steward.  After 92 incredible years on this earth, our precious mother, grandmother and great-grandmother was called home to glory on June 20, 2020.

Dorothy was born March 10, 1928, the only child of James Frederick and Martha Ann Wilson Massingale.  At the early age of seven, Dorothy was moved by the Holy Spirit and decided to follow Christ.  She joined St. James Church where the family worshipped.  As a young girl, Dorothy attended Lincoln School in Clinton, Missouri.  She was a bright, precocious student and skipped two grades.  Later, to further her education during a time of segregated schools, the family moved to Chicago, Illinois, where she graduated from Wendell Phillips High School a year early.  She loved music and attended advanced college studies in Chicago.

On February 17, 1946, Dorothy was united in Holy matrimony to the love of her life, Harold Lloyd Steward, a union that lasted until his death in 1999.  The couple later moved their family back to Clinton, Missouri. She was a devoted wife and living example of the Proverbs 31 woman, bringing honor to the family.

Dorothy’s greatest love was God, her husband, and their eight kids in that order.  There was not a task too small or too large when it came to caring for her family. She was a hands-on mother and actively engaged with all of her children, individually and as a whole. She taught her kids games from jump rope to baseball and merrily played alongside them.

She made every single one of her children feel like they were an only child when in her presence. At the request of the youngest child, the annual family picnic was born after he voiced missing his siblings.  Dorothy was willing to do anything to mend her children’s hearts and called everyone home for a summer family gathering.  It became an annual Steward family tradition that has spanned decades as God continued to define his creation.

Dorothy worked as a housekeeper and later as a typesetter and layout designer for the Clinton Daily Democrat.  Dorothy was a long-standing pillar in the Black community of Clinton and built many longstanding relationships that spanned decades.

She served faithfully on many religious and civic boards, including Grand Matron of the Order of Eastern Star, Founding Member of the Samaritan Center Development Board and ultimately served on the Henry Country Library Board of Directors, an institution which earlier in her life had denied her entry due to segregation.  She founded and was the Den Mother to the first integrated Boy Scout Troop in Clinton, Missouri. She and a dedicated group taught Black history in the community for many years.

One of her most cherished accolades was the naming of the Harold and Dorothy Steward Center for Jazz in St. Louis, Missouri, an organization dedicated to preserving the art of jazz for future generations.

In recognition of her lifelong accomplishments and love for education and service, Dorothy was recently awarded a Doctorate of Humane Letters from Lincoln University, Jefferson City, Missouri, an Historically Black University she held in the highest esteem.

Dorothy was musically gifted and taught and encouraged her kids to play music.  She played piano and alto saxophone, and lifted her sweet soprano voice in worship at St. James Church, Clinton United Methodist Church and numerous gatherings in the community. She continued to sing until she had no voice.

She ministered to millions of souls in her own special way, encouraging her children that, “You might be the only Bible they may see that day.”  Most importantly, she was a devout and humble woman of God and taught her kids to love Him and all of His children unconditionally.

Dorothy painted a masterpiece with her life, was truly a good “steward” of all God provided, and proof that while we all only have one life, if done right it is more than enough.  In all that she did during her abundant life, she honored God and the countless sacrifices made by those who came before her.  Dorothy’s vast and rich legacy will live forever in the hearts of her children, grandchildren, great-grandchildren, great-great-grandchildren and those who love the Lord.  She will be dearly missed by countless friends and family.

For those who wish, memorials may be made to Clinton United Methodist Church or the Harold and Dorothy Steward Center for Jazz.

I never had the pleasure of meeting Dr. Dorothy Steward but I know her daughter, Regina. When Regina speaks of her mom I hear the love and feel the joy in her spirit. May God guide this family and friends to embrace the memories of such a wonderful woman.

We extend our heartfelt sympathies to the Steward family. Forty years ago I met Mother Steward through Regina. What a precious woman of God. Know we are uplifting all of you in prayer.