A new type of aspirin from Dr. Shengmin Sang 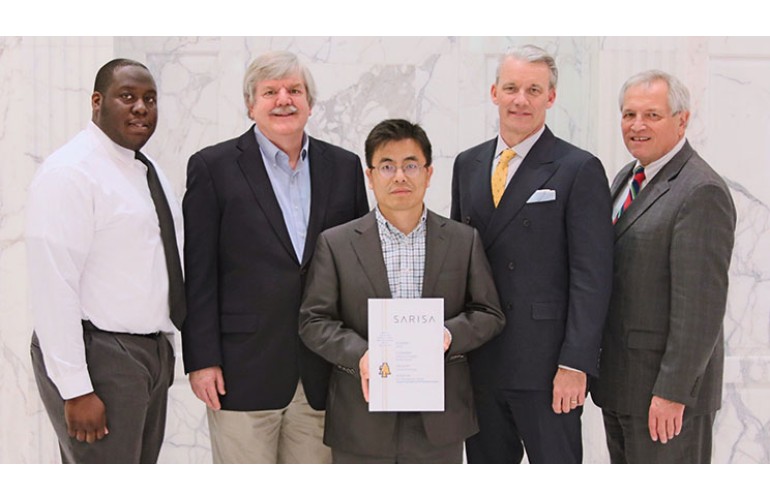 Could a new type of aspirin be the key to preventing cardiovascular disease and colon cancer? Dr. Shengmin Sang and his team of food scientists are trying to find out.

Most of us probably have a bottle of aspirin in our medicine cabinet that we use whenever we have a headache. For more than a century, the drug has been used to treat inflammation, fevers, and pain.

According to Dr. Shengmin Sang, however, the drug is also capable of treating and preventing a wide variety of more severe conditions. “Aspirin is a classic wonder drug,” he says, “It’s a magic drug.”

At the 2018 BEYA STEM Conference, he explains that recent studies conducted by the U.S Preventative Service Task Force (ASPSTF) show that, when taken in low doses on a daily basis, the drug is capable of preventing both heart disease and colon cancer.

The organization is recommending that people between the ages of 50 and 70 use the drug in order to decrease the risk of developing these diseases.

“We know that cardiovascular disease and colorectal cancer are a major cause of death,” he says, “It’s the third-most common both in this country and worldwide.”

The U.S. Preventative Service Task Force findings, therefore, could be big news for the medical industry.

As Dr. Sang points out, though, there are some risks involved in taking aspirin over long periods of time. Current research shows that long-term use of the drug can lead to gastrointestinal complications, namely burns and lesions within the digestive system.

“If you take aspirin long enough, you’ll eventually get some GI bleeding,” the doctor says, “It’s an acid which means that when it comes in contact with the stomach lining and upper GI mucosa, it can cause some damage.”

Therefore, he recommends that people who experience stomach distress, ulcers or bleeding problems don’t use the drug without first consulting a doctor.

It is this side effects, however, that drove Dr. Sang to develop a new form of aspirin. The product that he and his team are currently working on is one that would treat inflammation and reduce the risk of disease without harming the stomach or intestines.

Explaining his initial thought process around the project, he asks, “Can we modify the drug to lower the side effects? Can we make a safer and more effective aspirin derivative?”

Dr. Sang, who works in food science, studies the active compounds in food that prevents chronic disease. He believes that using dietary compounds in combination with aspirin, it is possible to reduce its side effects.

One category of compounds, known as dietary polyphenols, is known to have gastroprotective effects. A polyphenol called resveratrol, for example, is found in many common foods including peanuts, grapes, red wine and various types of berries.

“This compound has been reported to prevent cancer,” Dr. Sang explains, “It can protect the gastric mucosa against aspirin-induced side effects.”

By synthesizing resveratrol with aspirin, then, the doctor and his team are working to develop a drug that heals the human body and prevents any negative side effects.

They’ve created what scientists call a “prodrug”—a combination of two molecules the separates once it enters the human body.

For the past several years, he and his lab partners have been testing the drug on mice.

They’ve found is that the drug’s efficacy far outweighs the aspirin currently offered on the market. They’ve also found that their compound is much more effective than simply ingesting aspirin and resveratrol separately. “This means that we’ve enhanced the efficacy of aspirin,” he explains.

Although they’ve only tested the compound on animals, Dr. Sang and his team have received three separate patents: one for the compound itself and two others for its usage. They’ve also licensed their development to a company called Sarisa Therapeutics.

“We’re excited about our findings,” he says, “We hope that, at some point in the future, our compound can replace aspirin and provide patients with a safer and more effective alternative.”