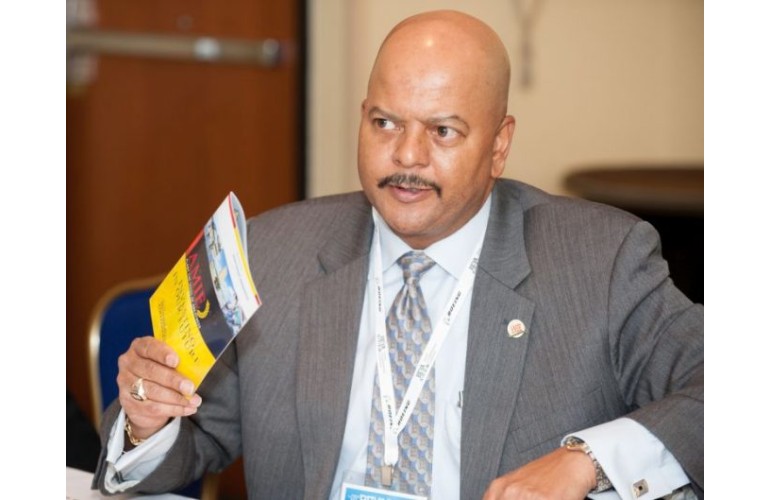 In this photo taken at a recent panel discussion,  Advancing Minorities’ Interest in Engineering (AMIE) Chairman Darryl Stokes held up a brochure that highlights innovation at 15 Abet-accredited engineering schools in historically black colleges and universities (HBCUs).

AMIE includes leaders from business and industry, higher education, and government agencies working together to advance the AMIE mission. They see a diversified workforce as a competitive advantage and an essential business strategy.

That’s why scientists and engineers affiliated with AMIE have formed a consortium with the Research, Innovation, Science, and Engineering (RISE) Foundation at Alabama A&M University.

The College of Engineering, Technology, and Physical Sciences at Alabama A&M University, and all 15 historically black college and university Schools of Engineering,  make up AMIE.

Chance M. Glenn, Ph.D. is executive director of the AAMU-RISE Foundation and dean of the College of Engineering, Technology, and Physical Sciences at Alabama A&M University.

According to Glenn, government contracting is a paradigm shift for most black colleges, which have been more accustomed to applying for grants than competing for contracts.

“We have been successful in executing contracts to provide meaningful products and services to the government. These projects increase learning experiences for engineering students and create new revenue streams for the university,” said Glenn.

“Although these schools have faculty scientists who are experts across technology disciplines, contracting with the government represents a new opportunity for some of them. What makes this collaboration unique is that we will actually be training and preparing our partners to work with the government as a contractor,” Glenn said.

The AAMU-RISE foundation has just completed Phase I of a small business technology project involving additive manufacturing, or 3D printing, for NASA.

Currently, AAMU- RISE is partnering with a defense contractor to demonstrate the feasibility of autonomous systems that reduce daily tasks of military pilots.

The foundation team also has been contracted to apply their expertise on the life-cycle of missiles and testing a turbo pump bearing system for the Marshall Space Flight Center.

“Consider NASA, for example,” said Latonia Jones, a contracting specialist who worked with Glenn to create the Knowledge Sharing Center, which is the web portal that will connect the consortium members, as well as prime contractors and agency program managers.

“NASA has a contract budget of $19.5 billion, and it has a goal of awarding 1 percent of that to HBCUs and other minority serving institutions. That means there is $195 million available to HBCU engineering programs. Yet, in the past, according to NASA officials, the agency has been unable to award even 10 percent of that amount. And that is just NASA. Other agencies also are looking for contract-ready HBCU partners.”

Membership in the Knowledge Sharing Center is open to all HBCUs, federal agencies and government contractors.

The AMIE/AAMU-RISE consortium will compete for research and development opportunities with the federal government for defense, aerospace, cyber security.

“This partnership is unlike other consortia attempts,” said Veronica Nelson, executive director at AMIE. “It is driven by opportunity and mutual benefit. The AMIE/AAMU-RISE Foundation partnership will allow us to collaborate and develop a method to utilize subject matter experts from various universities, as well as the facilities and equipment of a nationwide network of HBCUs. ”

Jones, Glenn, and Nelson said pursuing such contracting opportunities is critical, particularly because many HBCUs are looking for ways to create sustainable revenue streams and the government wants to increase contract diversity.

The RISE-AMIE endeavor is expected to increase the participation of black engineers in government technology projects, and generate new revenue streams for historically black college and universities.