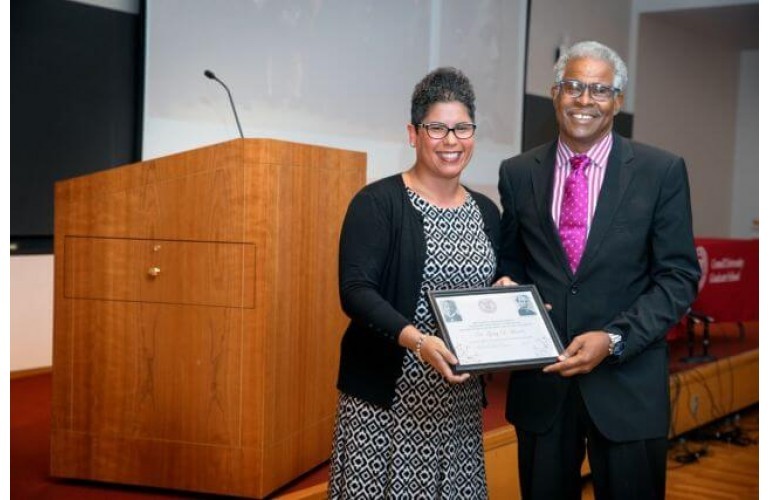 Three years ago, Dr. Gary L. Harris was honored by Cornell Graduate School with the inaugural Turner Kittrell Medal. According to the Cornell Chronicle, Sara  Hernández,  then associate dean for inclusion and student engagement at the Graduate School, presented Harris with the award at the end of Cornell University’s Success Symposium for underrepresented M.S./Ph.D. and Ph.D. students.

Harris “is responsible for helping Howard maintain its leadership role as the number one producer of on-campus African-American PhDs in the nation,” Hernández said at the event.

The Cornell award is named for educators and activists Thomas Wyatt Turner and Flemmie Pansy Kittrell,  the first Black man and woman to earn doctoral degrees from Cornell.

“These two individuals are legends on Howard’s campus,” Harris said during his acceptance speech. “They defined the whole essence of facts and science and engineering and technology, and were the inspirations for literally thousands of people.”

Turner studied botany at Cornell and taught at Howard between 1914 and 1924, and at Hampton from 1924 to 1945. A founding member of the NAACP, he fought for justice throughout his life, and for the admission of Black students to Catholic University, where he began his graduate studies.

In 1924 Turner encouraged Kittrell, who had a home economics degree from Hampton, to consider graduate studies at Cornell. The first African-American woman in the country to earn a PhD. in nutrition, she was an example for minorities pursuing a university education. Kittrell was instrumental in creating the federal Head Start Program, and as a Fulbright scholar, she established a home economics college and a nutrition research program at Baroda University in India. Kittrell taught at Howard for almost 30 years.

“I’m accepting it in honor of all the students that I’ve worked with – because, you know, awards are given to individuals but the work that I do is a team effort,” Harris said at the event.

Harris got to Howard University in 1980, after earning his bachelor’s and master’s degrees in electrical engineering at Cornell. He and Michael G. Spencer (former dean of engineering at Morgan State University) were the first Blacks to receive doctorates in their field from Cornell.

“While we were in college we were always talking about the community and what we were going to do once we got out and about how engineering related to the community,” Harris told US Black Engineer (USBE) magazine in 1986, when he and Spencer made the cover for groundbreaking research in microelectronic devices at Howard University.

“Senior year I started wondering what I was going to do when I got out,” Harris told USBE. “I knew I didn’t want to

go into industry because I had worked there before and there wasn’t enough freedom to do some of the things I wanted to do. So I stayed on in school and got a master’s in electrical engineering. I decided that since the ultimate things I wanted to was increase my flexibility and to have as many options as possible available to me, I should go ahead and get a PhD. So I was in college about nine years.”

At Howard, Harris, and Spencer assembled full-time researchers as well as graduate students. The program graduated its first Ph.D. in electrical engineering soon after. Their research was sponsored by grants and contracts from the Naval Research Laboratory, the National Science Foundation, the Jet Propulsion Laboratory at California Institute of Technology, IBM, and NASA. The materials they worked on are now used in everyday electronic devices.

Harris published more than 100 peer-reviewed articles, edited five books, and presented more than 200 papers at conferences. His research interests focused on the growth and characterization of electronic and optical materials, the fabrication of semiconductor devices with special attention given to wide bandgap and compound semiconductor materials, and applications of nanotechnology. In recent years, his research expanded to include: Applications of Nanotechnology, Bio-Sensors, Electrical Nano-Bio Interface, Optical Nano sensors, Applications Self-Organized Nano techniques, Paper MEMs, and Ultra Mechanical Coats/Material. Before retiring, Harris served as professor of electrical engineering and materials science and associate provost for research and graduate studies at Howard University, and director of the Howard Nanoscale Science and Engineering Facility and the National Nanotechnology Infrastructure Network.

“When I was a little boy I was always fascinated by electronics,” he told USBE magazine. “In junior high school, I started repairing televisions. I got a novice ham license and started studying electronics. Naturally, that led me on to electrical engineering. I wanted to know more.’”

I can say I went to school with famous people. May Gd have mercy on Gary.