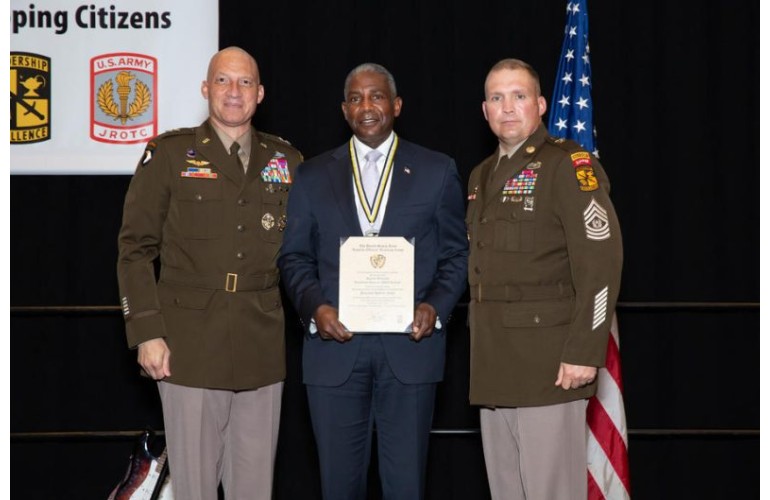 Earlier this year, Leidos, a leading information technology, engineering, and science solutions and services company, announced that 37 employees were honored at the 35th Annual Black Engineer of the Year Awards (BEYA) STEM Conference. The 2021 class of awardees is the largest in Leidos history.

More recently, Leidos announced that retired Lieutenant General Darrell Williams, who appeared in US Black Engineer magazine’s “Top Blacks in the Military” list until his retirement in 2020, was recently inducted into the U.S. Army Reserve Officers’ Training Corps (ROTC) Hall of Fame. (Photo courtesy of Leidos)

Williams is currently working at Leidos UK as vice president and managing director of the Logistics Division. He is also program director for Logistics, Commodities, and Services Transformation (LCST), a multi-billion dollar program to transform the UK Ministry of Defence’s supply chain.

Williams was honored at a ceremony held at the Association of the United States Army meeting in Washington, D.C. The Hall of Fame was established in 2016 as part of the ROTC Centennial celebration and recognizes cadets who have distinguished themselves in military or civilian pursuits.

The distinction provides a means of honoring Army ROTC Alumni who have made lasting and significant contributions to the nation, the Army, and the history and traditions of the Army ROTC program.

Williams’ military service spanned nearly four decades. His career culminated as the director of the Defense Logistics Agency, where he led a workforce of over 25,000 military members and civilians and provided strategic leadership for the U.S. Department of Defense’s combat support agency for worldwide logistics.

Williams is a graduate of the Army Command and General Staff College and the School of Advanced Military Studies, and a Distinguished Graduate of the National War College. He earned a bachelor’s degree in psychology from Hampton Institute (Hampton University), and master’s degrees in military arts and sciences, national security and strategic studies, and business management from Pennsylvania State University.