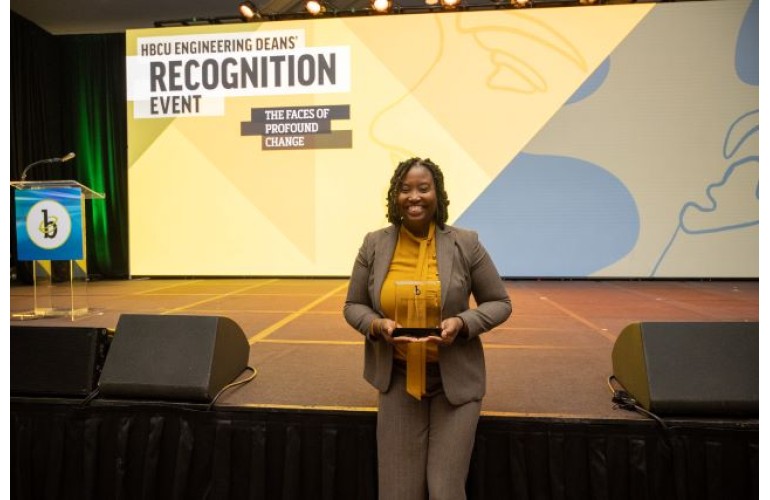 The Linda Gooden Legacy Award is named for the 2006 Black Engineer of the Year. A founding president of Lockheed Martin Information Technology, Gooden was a respected business leader in aerospace and defense during her 40-year career. While heading Lockheed Martin’s information systems and global solutions unit, she had responsibility for 30,000 professionals who provided information technology (IT) solutions to support civil, defense, intelligence customers worldwide.

LaTasha Taylor Starr has demonstrated technical excellence throughout her early career with Lockheed Martin. So much so, she is on track to becoming an industry fellow, all while paving the way for next-generation engineers with ESTe²M Builders, a nonprofit she co-founded to further Esteem, Science, Technology, Engineering, Entrepreneurship, and Math (STe²M) education through a creative approach.

LaTasha joined Lockheed Martin after graduating with a bachelor’s degree in aeronautics from Tennessee State University. At the University of Washington, she earned a master’s degree in user interface design and astrobiology. She is currently pursuing a Ph.D. in industrial, manufacturing, and systems engineering from the University of Texas at Arlington.

As a nod to her creative flair, LaTasha gave one of the most poetic speeches at the 2022 Historically Black College and University (HBCU) Engineering Deans’ Recognition event during the 36th annual Black Engineer of the Year Awards (BEYA) STEM Conference. Here’s what she said:

“The ESTe²M to dream
The confidence to try.

Through problem-solving and hard work
Engineering became my why

From Memphis, Tennessee to Tennessee State
I had only one goal
To be better than Good
To be Great!

At Lockheed Martin, I began my career
A leader in aerospace, a mentor to other systems engineers.

The ESTe²M to build
The confidence to do

Attacking every challenge with something to prove
Interdisciplinary, innovator, inspiring have been used to describe me
My passion for helping others succeed, my greatest legacy.

I am grateful to all who help me believe.
To my nominator, my colleagues
And most of all, my family.”