BEYA Military Alumni Committee pays tribute to Charles McGee, one of the oldest living Tuskegee Airmen, who died at 102 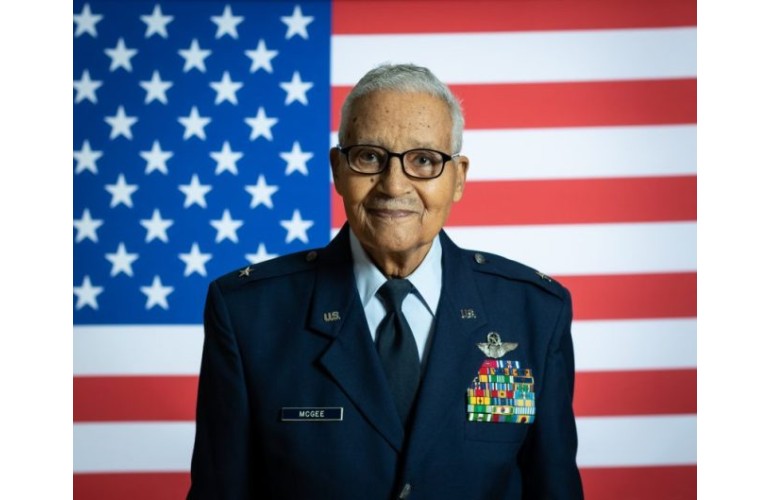 Charles E. McGee, who was among eight remaining Tuskegee Airmen combat pilots out of the 355 that were assigned to the 302nd Fighter Group during WWII in Europe, died peacefully in his sleep on January 16, at the age of 102 years.

According to a press release from Tuskegee Airmen Incorporated (TAI), McGee served two terms as national president of TAI and received accolades, including the National Aeronautical Association’s ‘Elder Statesman of Aviation.’

The U.S. Department of Defense posted a tribute on its website on how “McGee ended up flying in World War II for the Army as part of  a group of Black pilots and ground personnel with a remarkable service record during the war.”

“He had his right hand over his heart and was smiling serenely,” his youngest daughter Yvonne McGee said in the TAI statement announcing his death. “He was a wonderful human being … I feel proud and privileged to be called his son,” McGee’s son, Ron McGee said.

In 2007, President George Bush awarded the Tuskegee Airmen, including McGee, the Congressional Gold Medal. In 2011, he was inducted into the National Aviation Hall of Fame in Dayton, Ohio. He also served as a consultant to the 2012 George Lucas film, Red Tails. On Feb. 4, 2020, he was promoted to brigadier general by President Donald Trump.

“Today, we lost an American hero,” tweeted Secretary of Defense Lloyd J Austin III.”Charles McGee, Brigadier General and one of the last surviving Tuskegee Airman passed at the age of 102. While I am saddened by his loss, I’m also incredibly grateful for his sacrifice, his legacy, and his character. Rest in peace, General.”

Today, we lost an American hero. Charles McGee, Brigadier General and one of the last surviving Tuskegee Airman, passed at the age of 102. While I am saddened by his loss, I’m also incredibly grateful for his sacrifice, his legacy, and his character. Rest in peace, General. pic.twitter.com/3GLNbfRHs7

“As a Navy fighter pilot, one of the most rewarding experiences of my life was getting to hang around and talk with General McGee and other Tuskegee Airman pilots and crew,” retired Vice Admiral Walter Davis told Black Engineer Online.

“I attended the Tuskegee Airman conventions and became a member,” added Davis, who serves as chairman of the BEYA Military Alumni Committee. “Hearing the story of how they fought prejudice to get the opportunity to fly and fight during World War II was inspiring to me. They were not only great in the air but found innovative ways to fight Jim Crow rules and bigotry on the ground. They kept their dignity and spirits up while performing outstanding flying. Hearing how they did that was exhilarating to me. General McGee took all those World War II lessons learned and went on to set an example as a leader in Air Force.”

From 1996 until his retirement on January 1, 1997, VADM Davis was U.S. naval aviation’s Gray Eagle. He is a founding father of the BEYA Stars and Stripes, one of the nation’s largest events honoring both active and retired Black admirals, generals, and members of the federal senior executive service.