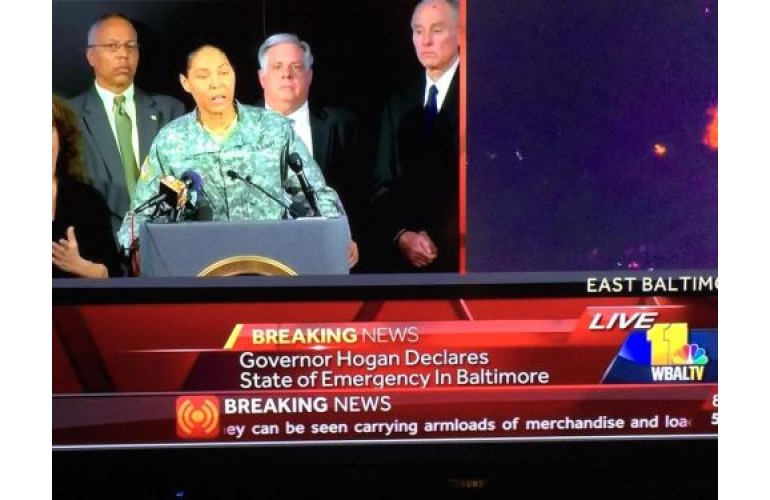 Major General Linda Singh spoke on television after Maryland Governor Larry Hogan (center) declared a State of Emergency and called in the National Guard for law reinforcement in Baltimore city after riots broke out.

Baltimore’s public safety emergency is one of the first domestic missions for Gen. Singh.

The 29th adjutant general of Maryland, first African-American and the first woman to hold the post, took command of the Maryland Army and Air National Guard in February.

“Being able to accept this on behalf of all of my troops out there and being able to continue to watch them grow in their careers, I think that’s probably the most important thing to me,” she told the National Guard.

Prior to the award ceremony she joined with other senior leaders from the military in a mentoring session for high school students interested in science, technology, engineering and math.

The event was designed to foster a greater interest in science, technology, engineering and math among high school students–specifically minority students–and featured many senior military officials who spoke about their experiences and how science and technology impacted their lives.

“That’s our next generation of leaders,” Singh said. “The big thing is we know that if we don’t invest the time in our young and we leave them to their own devices without the mentoring and the guidance, then we’re not going to have a strong set of leaders.”