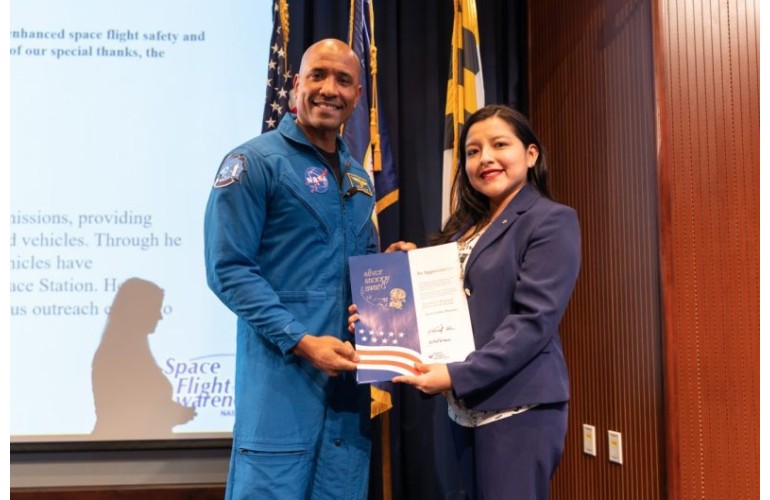 Career Communications Group recently had a telephone conversation with a dynamic and passionate leader, Rosa Avalos-Warren, who has a critical role in NASA’s upcoming launch to the Moon, Artemis I.

On or around August 29th, NASA is launching the first uncrewed flight test in a series of missions that will ultimately establish a long-term human presence on the lunar surface while paving the way to send astronauts to Mars. On the ground, making sure the launch goes off without a hitch, is Rosa, the Human Spaceflight Mission Manager at NASA’s Goddard Space Flight Center.

Born in Lima, Peru, Rosa became interested in spaceflight after watching the tragedy of the Columbia mission and wanting to help ensure nothing like that ever happened again. After earning her bachelor’s and master’s in engineering, Rosa trained to become an invaluable part of what many consider one of NASA’s most important missions. She is an inspiration to tons of other young Latina women.

***On March 4, 2022, NASA astronaut Victor Glover presented engineer Rosa Ávalos-Warren with the Silver Snoopy award, a recognition of exceptional service to the different human spaceflight missions, with an emphasis on flight safety and the success of the missions. Credits: NASA

What I do on the Artemis I Mission

My name is Rosa Avalos-Warren. And I am a human spaceflight mission manager working for the Near Space Network. I am one of the lucky people that get to work with the Artemis I mission. In this case, trying to ensure that we have our capabilities and technologies all set up to provide Artemis I with continuous communications services as it launches from Earth on its way to the Moon and back.

The Artemis missions will take us back to the Moon and establish humans on the lunar surface, living and working on advancing our capabilities. The special part about this is that the Artemis missions will take the first woman and the first person of color to the Moon. Artemis I is setting the stage for a new era of lunar exploration that will establish different infrastructure, including having a future lunar Space Station called the Gateway.

Enabling the communications services ensures that the flight controllers here on Earth can successfully send commands to the spacecraft and receive the data from the Orion capsule and the Space Launch System launch vehicle.

I was born and raised in Peru. I am a first-generation college student in the United States. My first experience with NASA was working as a student researcher while studying at Virginia Tech University. I had amazing professors that were my mentors, and they were able to connect me with a project with NASA’s Langley Research Center. It’s amazing how NASA invests in the younger generations and tries to ensure that they have programs for all of us, including a student researcher.

And so, I started back in 2009. And over the years, I was able to do research. After I graduated, I worked as a structures and mechanisms engineer for the International Space Station program out of NASA’s Johnson Space Center. That provided me with different tools to understand more about the different areas around the International Space Station. So, I worked as a passive thermal control systems engineer and a systems engineer.

Then I received an offer to work out of Wallops Flight Facility as a launch and flight operations project manager. It was great because it was also related to the human spaceflight area. The cargo vehicles going to the International Space Station led my career to take a turn. I accepted an offer to be a mission manager with the human spaceflight group out of Goddard.

I received my aerospace engineering degree from Virginia Tech and have a master’s degree in mechanical engineering from Rice University. Additionally, I have certificates from the Massachusetts Institute of Technology in systems engineering.

The first launch I viewed was the Columbia mission. It was all on TV. I was astounded to see this massive launch vehicle making its way to space. I had a lot of questions about how a team could make this happen. And so that opened my eyes to aerospace engineering. From the very beginning, I was attracted to math and science. But after experiencing that launch via TV, I had a lot of questions. So, I was going back to my teachers asking about aerospace and space sciences.

As you probably know, the Columbia mission, STS-107, unfortunately, suffered a thermal protection system problem and exploded. I witnessed that; it was a teaching moment for me to study. And so, it is certainly an experience to learn from and set my mind on studying aerospace engineering. I was in school at that time, and it certainly encouraged me to ask more questions and look into any math and science programs.

My parents never went to college, but their support helped me. I always saw them work, which motivated me to do well in school. My mom was a hotel housekeeper, and my dad worked at a grocery store. My siblings were back in Peru. They were older than me.

I was selected for a specific academy for math and science as I was heading towards high school, which helped me take more advanced classes. So, I was already taking college-level courses in high school. Asking questions from the teachers and understanding programs helped me get college credits by the time I started with Virginia Tech.

So, one of the interesting parts is even when I got to college; I saw that there were classes that seemed hard and very complex. But just like you peel an onion and try to assess different sections, it helped me tremendously to take it section by section instead of overwhelming myself. If there was a dynamic problem that I could not understand or I could not get an answer for, I just started taking it step by step. And even though it may have seemed very complex at the very beginning, it started making sense.

I will credit that a lot to my parents, but I’ve also had great grandmas. In Peru, one of my grandmas had a whole fig farm. By the time I met my grandmothers, my grandfathers had already passed. So, they were the ones that were carrying on the work to bring food to the house for twelve children on my mom’s side and eleven children on my dad’s side.

I like to tell my journey to NASA to future generations. I participate in multiple educational outreach activities, speaking to students and encouraging them to follow their passions and pursue science and math. I am very proud of my career and what I have achieved alongside my team. I have worked on over thirty missions for NASA and am looking forward to supporting the Artemis I launch.