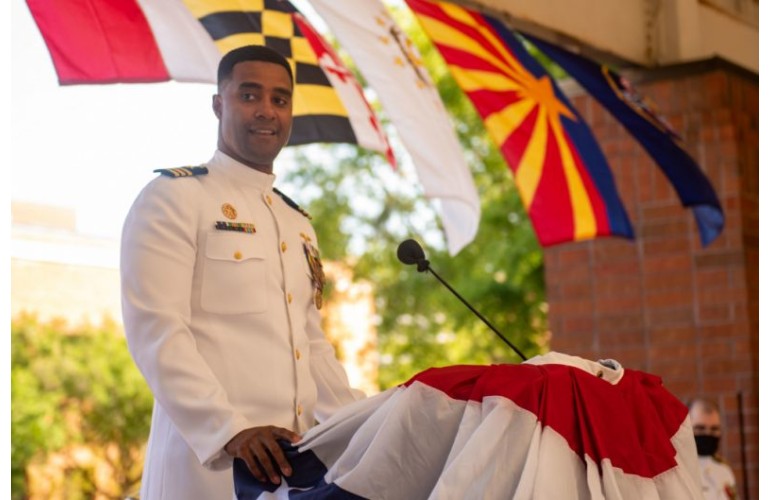 Commander Michael Paisant, winner of the Career Achievement in Government Award at the 2021 BEYA STEM Conference, will now serve as Deputy Commander for Training at Commander, Submarine Squadron 16. The United States Navy unit is responsible for the maintenance and operation of two guided-missile submarines and one ballistic-missile submarine based in King’s Bay, Georgia.

A native of New Orleans, Paisant graduated from the U.S. Naval Academy with a Bachelor of Science in quantitative economics. He assumed command of the Ohio-class ballistic-missile submarine USS Maryland (SSBN 738) in June 2018 and credits three successful deployments to the hard work of the crew and commended their display of resiliency during a global pandemic.

Cmdr. Henry Wicks relieved Cmdr. Michael Paisant as the commanding officer of the ship’s Gold Crew in a ceremony on board Naval Submarine Base Kings Bay, Georgia, April 22.

Rear Adm. John Spencer, Commander, Submarine Group Ten was the guest speaker at the event and he lauded Paisant and USS Maryland Gold Crew’s role in continuing to meet the mission in spite of the unique challenges posed by a global pandemic.

Spencer described how Maryland Gold has ranked highly amongst the commands in Submarine Squadron 20 and across the submarine force in terms of people-centered metrics.

“We navigated over 28,000 nautical miles—that’s more than enough to circumnavigate the globe—completing three patrols aboard the world’s most lethal warship,” Paisant said to the crew. “On that third patrol, we navigated this new normal of wearing masks and adhering to social distancing, as much as you can aboard a submarine, while still remaining laser-focused on the mission. Maryland’s best days are in her future and I wish all of you continued success.”

Paisant led the charge in the operational development and employment of a cutting-edge sonar sensor. He was also in charge of a platform that includes a nuclear reactor and nuclear weapons, leading his team through training events related to nuclear power steeped in science, technology, engineering, and math (STEM).

“Commander Mike Paisant represents the best of the submarine force, the Navy, and his local community in every aspect. He defines what it means to be a role model in the submarine force and community through his leadership every day and is deserving of this prestigious award,” said Captain Craig Gummer, commanding officer U.S. Navy, who nominated Paisant for a Black Engineer of the Year Award.