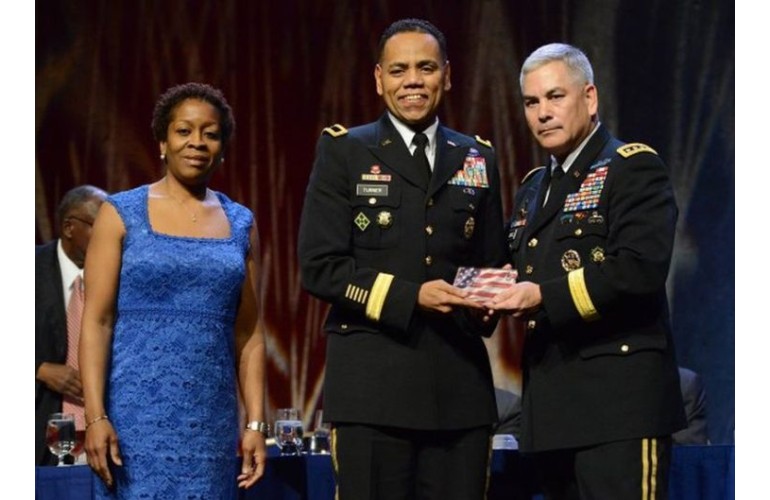 The military engineer was recognized for his outstanding engineering services at the 9th annual Stars and Stripes dinner, part of the 2014 Black Engineer of the Year Award (BEYA) Science, Technology, Engineering, and Math (STEM) Conference.

In his new role, Gen. Turner will lead American Water’s Military Services Group, which works with the United States Military to treat and supply water and to collect and treat wastewater for military installations all over the country as part of the federal government’s Utility Privatization Program.

Founded in 1886, American Water is the largest and most diverse publicly traded U.S. water and wastewater utility company. With headquarters in Voorhees, N.J., the company employs 6,800 professionals who provide regulated and market-based drinking water, wastewater and other related services to an estimated 15 million people in 47 states and Ontario, Canada.

“We are humbled to have someone who has given so much to his country become part of the American Water team,” said Susan Story, president, and CEO of American Water. “Gen. Turner’s leadership and extensive expertise will add great value to the leadership team at American Water.”

Gen. Turner most recently served as the commander of the U.S. Army Corps of Engineers, South Atlantic Division. In this position, he oversaw the planning, design, and construction of projects to support the military, protect water resources, and restore and enhance the environment in eight southeastern states.

Gen. Turner has served his country on the Joint Staff as assistant deputy director of operations, emergency action officer, global nuclear strike advisor and senior operations officer. His military background included assignments in the continental U.S., Germany, Bosnia, and the Middle East. During the Gulf War, he commanded Bravo Company, and he served a combat tour as commander of the 14th Combat Engineer Battalion with deployment to Operation Iraqi Freedom.

In February  2014, Vice Chief of Staff of the Army Gen. John F. Campbell presented the BEYA Stars and Stripes Army Award to Gen Turner at the 9th Annual Stars and Stripes recognition dinner, part of the 2014 Black Engineer of the Year Award (BEYA) STEM Conference. Gen Turner was recognized for full support to the wide range of engineering duties in the Army:  building structures, developing civil works programs and providing combat support.

Turner graduated from the University of Central Missouri with a bachelor’s degree in mathematical sciences and has been named one of the university’s Distinguished Alumni. He also holds a master’s degree in industrial engineering from Wichita State University and a Master of Strategic Studies degree from the U.S. Army War College. He is a Harvard Senior Executive Fellow.