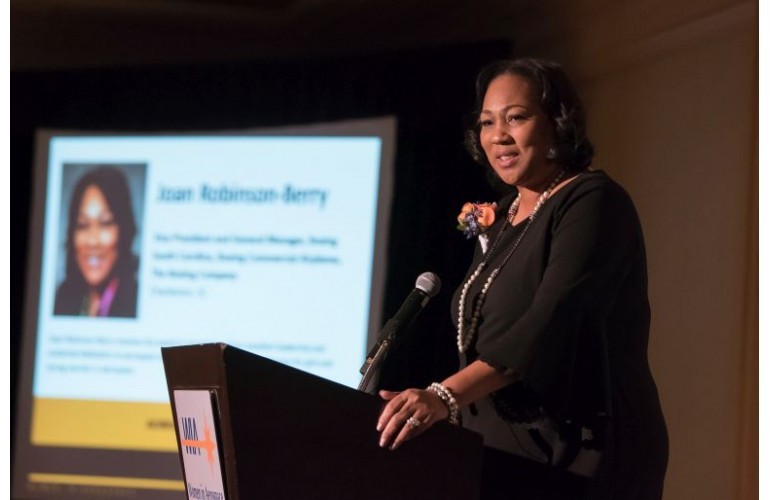 Currently, vice president of engineering, modifications, and maintenance for Boeing Global Services, Robinson-Berry was named to the list of influential African American female executives by the magazine’s editors.

The feature will appear in the first quarter 2019 issue of Black Enterprise.

Robinson-Berry will also be recognized at the magazine’s Women of Power Summit’s Most Powerful Women in Corporate America ceremony in Las Vegas during the last week of February.

She recently received an Achievement Award at the 2017 Women in Aerospace’s annual awards ceremony.

Robinson-Berry is an AIAA – Associate Technical Fellow and an African Scientific Institute Fellow.

So Proud of you Joanie, sending prayers and blessings with love to the whole family.

Fantastic Joan! Congratulations, we are so proud of you – this is well-deserved.

Congratulations Joan, you are the most deserving person for this recognition! Continue to soar with God’s blessings! I am so proud of you my friend!

Congratulations auntie , very proud of you and much love .

I am so proud of you.. The journey is NOT OVER YET..CONTINUE TO INSPIRE!!

Congratulations Joan. So proud of you.

Your awesome Joan!
Do proud if you.

Congratulations Joan! From your time in Silicon Valley (bump AI and ML!) to your time with us in SC, and now in your new leadership, you continue to inspire us! Now more than ever we need leaders like you!

Congratulations to you. We are very proud of you.

Hey Sis! Keep working hard and you’ll some day make a name for yourself. 🙂
Love Ya!
Wayne

I love it when people get together and share views.
Great blog, continue the good work! https://www.acupuncturerive-sud.com/lanxiete-chez-les-enfants/

I love it when people get together and share views.

Wow, this post is fastidious, my sister is analyzing
these kinds of things, thus I am going to tell her. http://lescaledetente.com

Everyone loves it whenever people get together and share thoughts.

Great blog, keep it up! https://lovedoppler.com

I really like it when folks get together and share views.
Great site, stick with it! https://eleganzamagazine.com

Thanks for writing this awesome article. I’m a long time reader
but I’ve never been compelled to leave a comment.
I subscribed to your blog and shared this on my Twitter.
Thanks again for a great post! https://aldus.ca

Thanks for posting this awesome article. I’m a long time reader but
I’ve never been compelled to leave a comment.
I subscribed to your blog and shared this on my Facebook. Thanks again for a
great post! https://tesgo.ca

I have been browsing online more than 4 hours today,
yet I never found any interesting article like
yours. It?s pretty
worth enough for me. In my view,
if all website owners and bloggers
made good content as you did, the internet will be a lot more useful
than ever before. https://actionmobile.ca/entretien-de-votre-pare-brise/

I like it when folks get together and share thoughts. Great site, continue the good work! https://www.publissoft.cl