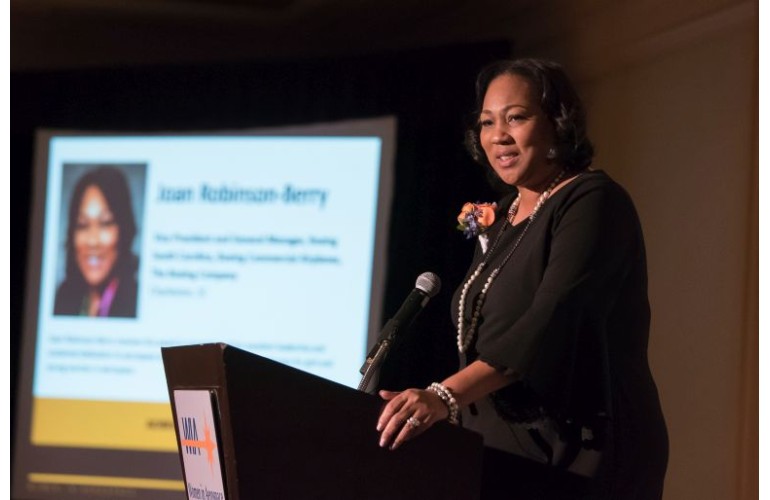 Joan Robinson-Berry, vice president and general manager of Boeing South Carolina, received the 2017 Achievement Award of the Women in Aerospace.

Women in Aerospace is dedicated to expanding women’s opportunities for leadership and increasing their visibility in the aerospace community. Robinson-Berry was recognized for her service as a role model and mentor that shows dedication to the advancement of women in aerospace.

Throughout her more than 30-year Boeing career, Robinson-Berry has promoted science, technology, education, and mathematics (STEM) across Boeing as well as in the communities where she has lived including Long Beach, Seattle, St. Louis, Chicago, and Charleston.

In particular, she has focused on inspiring students to pursue technical education, drawing on her own experiences to illustrate how socioeconomic challenges can be overcome. She works tirelessly to bring a message of hope and confidence to students who need the inspiration to aspire to careers in engineering, technology, and development.

Robinson-Berry joined Boeing in 1986, after working in design engineering for General Dynamics and cofounding and operating a small engineering company in the inner city of Los Angeles.

Since then she has held numerous positions in program management, engineering, quality assurance, and human resources. She has served as director of technical workforce excellence, director of engineering processes, tools, and skills; and program manager of the MD-80/-90 Twin jet Programs. She has represented Boeing on the Billion Dollar Roundtable board of directors, served on the board for the National Minority Supplier Diversity Council, and was responsible for improving Boeing relationships with the federal government on small business subcontracting and supplier diversity.

“Joan is a true leader for aerospace education, and she is especially tenacious when advocating for young women in this industry,” said Shelli Brunswick, chairperson of Women in Aerospace.

Robinson-Berry is one of the highest-ranking African American female technical executives at Boeing.

“We are incredibly proud of Joan and the recognition she is receiving for her positive contributions to our industry,” said Kevin McAllister, president, and CEO of Boeing Commercial Airplanes. “Joan is among a growing number of Boeing leaders who actively demonstrate what it means to be true champions for diversity and strong role models for our industry.”

Boeing has been a corporate supporter of the Women in Aerospace organization since its inception in 1985, and WIA has recognized more than eight past and present Boeing leaders.

In 2007, Robinson-Berry received Career Communications Group’s Black Engineer of the Year Achievement Award and was inducted into their Alumni Hall of Fame in 2012.