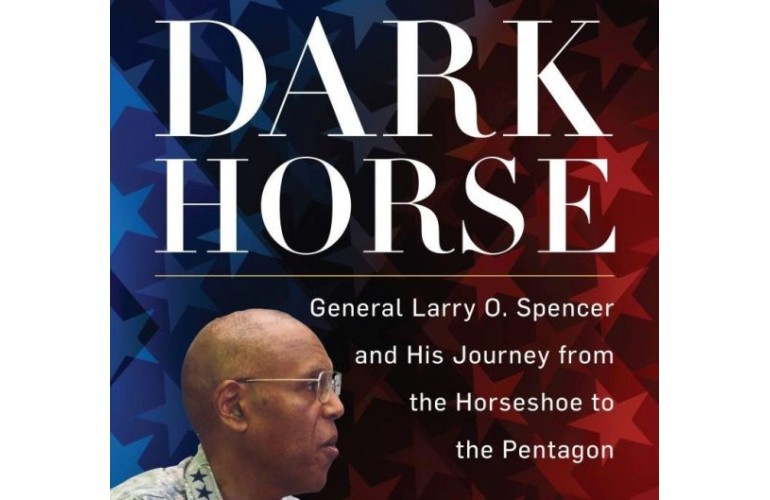 In 2010, U.S. Air Force General Larry Spencer was honored with the Career Achievement in Government award at the Black Engineer of the Year Awards (BEYA). The career officer received honors and recognition for more than 30 years of service in the Air Force.

Over the next several years, the general mentored groups of students during the Stars & Stripes event at the BEYA STEM Conference. (Photo source: U.S. Air Force photo/Scott M. Ash)

Since retiring in 2015, Spencer has served as president of the Air Force Association, overseeing staff and managing the organization’s day-to-day operations. He also was the publisher of Air Force Magazine, the association’s professional journal.

This week, Gen. Spencer shared a sneak peek of his biography Dark Horse, which details his journey to the Pentagon.

According to the Naval Institute Press, the book-publishing department of the U. S. Naval Institute, the hardcover book will be published on November 15.

Paul Stillwell, editor of ‘The Golden Thirteen: Recollections of the First Black Naval Officers,’ said that Spencer’s memoir is instructive in the Black Lives Matter era.

“His vivid prose puts the reader at his side, watching events through his eyes as he experienced a wide variety of situations. His achievements in overcoming negative peer pressure, low expectations, racial stereotypes, and discrimination can serve as an inspiration for many Americans,” Stillwell said in a statement.

Spencer was born and raised on the Horseshoe—a tough inner-city street in southeast Washington, D.C. Both parents lived in the rural south under Jim Crow and “separate but equal” laws. Spencer’s father was a career Army soldier who lost his left hand during the Korean War, suffered from post-traumatic stress disorder, and worked two jobs. His mother completed tenth grade, had no driver’s license, and was left alone during the week to raise their six children. The Horseshoe was a tough neighborhood where fights were common, and the school systems were second-rate. The expectations of living in an all-Black area were to be good at sports while shunning academic prowess. (“Dark Horse | Gen. Larry Spencer, USAF (Ret …”)

The Washington D.C. native went on to enlist in the U.S. Air Force, where he continued to struggle with the racial turmoil of the 1970s. However, a senior non-commissioned officer saw promise in Spencer and guided him to obtain a college degree and apply for Officer Training School, where he excelled. As a young first lieutenant, he was assigned to a tough job in the Pentagon, but Spencer earned an early reputation as a fast burner.  In 1990 he took command of a squadron that won accolades and awards for their performance during Operation Desert Shield/Storm. Spencer served at the White House and then successfully commanded a Group and a Wing before being assigned as the chief financial officer (comptroller) for Air Combat Command, the largest command in the Air Force. During that assignment, Spencer was promoted to brigadier general and set up a new Directorate at Air Force Materiel Command. (“Dark Horse | U.S. Naval Institute”)

Spencer later returned to the Pentagon, where he led Air Force Budget. He ultimately became the Air Force’s thirty-seventh vice chief of staff, making him one of only nine African Americans promoted to four stars. Spencer concludes his historic climb with life lessons learned from the inner city to the Pentagon.