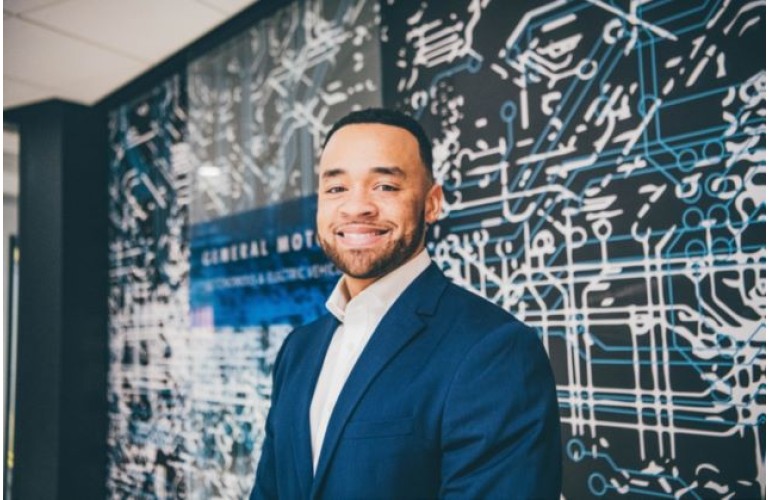 Speaking about his role as EVP, Johnson, the 2021 Black Engineer of the Year, shared what it took to lead 130,000 people. His responsibility involves mapping a future for every worker loading steering wheel columns into vehicles on the assembly lines.

Five years ago, GM came up with a plan to win the future for its employees, customers, and the communities they work. As chief executive and subsequently chairman, Mary Barra led a rethink of the corporation’s vision. They found purpose anchored in zero crashes, zero emissions, and zero congestion. In short: electric vehicles (EV).

“Producing vehicles is not a purpose; it’s an outcome,” Johnson explained. “We need to know why we are going to produce vehicles, and once you know, you can answer why certain technologies were going to be a part of your portfolio. And once you put zero emissions in and start doing the research and looking at what technologies are going to enable that to become true, you end up at electric vehicles.”

Johnson said that although there are fuel cells, hydrogen, and natural gas, it became clear that electric battery technology would be the way for GM to pursue its mission of zero emissions.

“We believe in the science of climate change, and we think our responsibility, now our mission and purpose, is to not just produce 3 million vehicles in the U.S. market or 6 million cars around the globe, but to do it in a way that has zero impact on the environment, on the Earth, and still give everyone the freedom that they love in their vehicles, and the style and functionality that cars have to come to mean and provide for us in our lives.”

Johnson also said GM’s Factory Zero connects to the mission of zero-zero-zero and the company’s history. When GM began operations in Flint, MI, Factory One was the first factory, now regarded as a historical site. When GM decided it would launch an electric vehicle (EV) future in 2013-2014, the company selected the Detroit Hamtramck facility and renamed it Factory Zero.

“It’s representative of a new company being born out of a new facility, connected to a mission that has three zeroes attached to it,” Johnson explained. “That will define what we do and invest in for decades to come. And would also connect people to the mission that we call: Zero crashes, saving lives, zero emissions, saving the planet, zero congestion, saving our precious commodity time,” Johnson said. Johnson described the Hummer EV as a “mind-blowing vehicle of both capability and beauty,” evidenced by the fact that the first year’s production had already been sold in January.

Previously, he worked on the Cruise Origin, a future autonomous ride-sharing vehicle, and a project involving GM, Honda, and Cruise. His responsibilities included being an integration lead on engineering, autonomous vehicle technologies, an authority in design and purchasing forums. Muse also led two technologies needed to execute autonomous vehicles while managing a multimillion-dollar budget.

“We at General Motors recognize that we can’t sustain forever on fossil fuels,” Muse said on High-Tech Sunday in June 2021. “We can’t continue to pollute the Earth. Climate change is real. And we as an organization have an obligation to make this Earth a better place for generations to come. Being the leader in the automotive industry, we will fulfill that obligation with the revolution that is electric vehicles. If you live in the United States, you know that GM’s bread and butter are trucks and SUVs. So, we can now marry our vision of zero-zero-zero with our electric trucks that customers love,” he said.

“Zero crashes in autonomous vehicles don’t drive distracted. It knows exactly how to move,” Muse explained.” Zero congestion is when you have vehicles on the road and know where they need to go. You get where you want to go safer, faster, and more efficiently. Zero emissions working on all-electric platforms means these vehicles do not have a carbon footprint like our typical emission engines do,” he said.

Before his current assignment, Muse was a design release engineer leading the design of GM’s full-size truck and SUV air induction systems. Before this role, Muse was the engineering operation supervisor of GM’s Wind Tunnel Test Facility. Prior, Muse earned a name as the lead aerodynamicist for GM crossover platform vehicles. In this role, he executed aerodynamics development, testing, and design of crossover vehicles, most notably the Chevrolet Blazer, Chevrolet Traverse, Buick Enclave, and Cadillac XT5. “I was a car guy in school,” said Muse.

“When I got my first car, I did everything I could to put a sound system in it, swapped out the wheels and air induction systems, breaking it and putting it back together again as any kid would do,” recalled Muse.

During high school, Muse’s passion was basketball. He also served as a batboy for the Chicago White Sox and fell in love with flight at an aviation summer camp. While at Ohio State University, Muse attended a career fair, and General Motors offered what he considered a dream internship: serving as a test engineer driving cars at a proving ground.