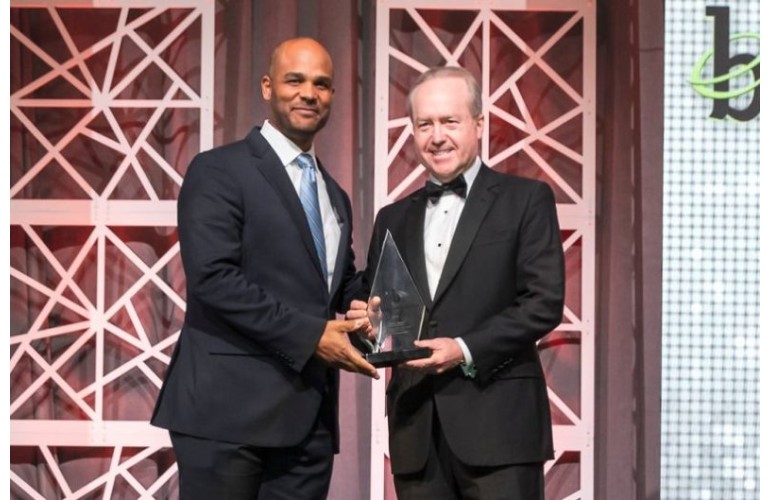 Clifford L. Macklin won the Senior Technology Fellow Award at the 2019 BEYA Gala. Presenting the award Raytheon Company CEO and Chairman Thomas A. Kennedy said Macklin has “leveraged his talents as a designer, architect, and technical lead to become a subject matter expert in a challenging and critical mission area: Cybersecurity.”

“Not only has he had these accomplishments in technology, but he’s found time to serve as a teacher and a mentor. Clifford is helping in keeping the cybersecurity pipeline very well stocked,”  Kennedy said.

Accepting the award for outstanding contribution to technology advancement, Macklin paid a touching tribute to his father, United States Air Force Chief Master Sergeant Eddy Macklin, and his mother, who is a principal, a teacher, and a counselor.

“I grew up in a military household with racially mixed parents which presented challenges associated with biannual moves as well as relationships in the communities with which we interacted,” Macklin said. “But because of the foundation laid in me, this environment, touched by adversity but fused in love, was a training ground to grow and solidify my sense of self. That foundation was laid by my father and my mother. Their message was simple: ‘there are no excuses. You’re responsible for your destiny. God made you great and we expect to use what God has provided.'”

Mackin also thanked his wife of nineteen years and their three children, who he said were avidly following the BEYA Gala online and keeping his phone busy.

As an Engineering Fellow and member of the Raytheon Space and Airborne Systems (SAS) Technical Staff, Macklin is recognized by his Raytheon colleagues for his expertise in company programs and projects. He has more than 20 years of experience in security engineering, working with customers and concept development.

Dr. Kennedy presented awards to two other Raytheon professionals at the BEYA Gala: the Black Engineer of the Year Award for Outstanding Technical Contribution in Industry to Dr. Adrian Williams, and the Professional Achievement in Industry Award to Cedric Fletcher, who also grew up in amilitary household.