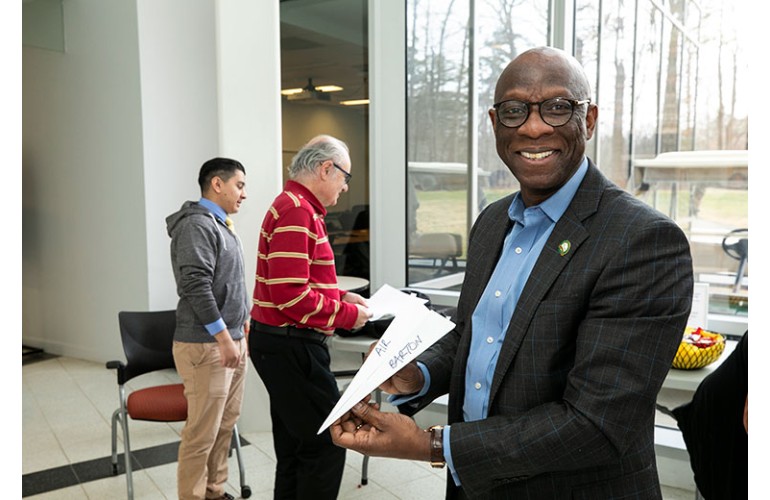 The first black engineer to achieve the rank of full professor at the United States Naval Academy, Dr. Barton was also the first within the academy’s Division of Engineering and Weapons.

He received the College-level Promotion of Education Award at the 2009 BEYA STEM Conference. In 2014, Dr. Barton was elected to the Career Communications Group (CCG) Hall of Fame.

During his years as an educator at the Naval Academy, Professor Barton taught thousands of young men and women. He was an advisor to Trident Scholars, while providing mentoring to midshipmen in study clubs. Barton was present at all engineering related events, and was admired and sought after as an advisor, teacher, and counselor throughout the student body.

In the fall of 2014, after completing a 22-year career at the Academy, Barton joined the Department of Mechanical Engineering at George Mason University’s Volgenau School of Engineering. (Photo courtesy of George Mason University). He has served as division chair of the American Society for Engineering Education Military and Veterans Constituent Committee, is a Commissioner for Engineering Accreditation Commission of ABET, Inc., and was a program evaluator for six years before joining the commission.

“Once I had a fear of math,” he told Black Engineer magazine. “I didn’t pass a math test that I took in elementary school, I was afraid I couldn’t be a success.”

Barton went on to graduate with a degree in engineering and was invited to do a presentation by the American Society of Mechanical Engineers in Birmingham, Alabama. His topic dealt with the finite element analysis pipe structures, a computational method to determine the stresses of pipe structures. Barton’s presentation was so impressive that he received a certificate and award from ASME. He soon started working towards his master’s degree.

“After I get my PhD in mechanical engineering, I want to be a full time professor,” Barton told Black Engineer magazine in 1984.