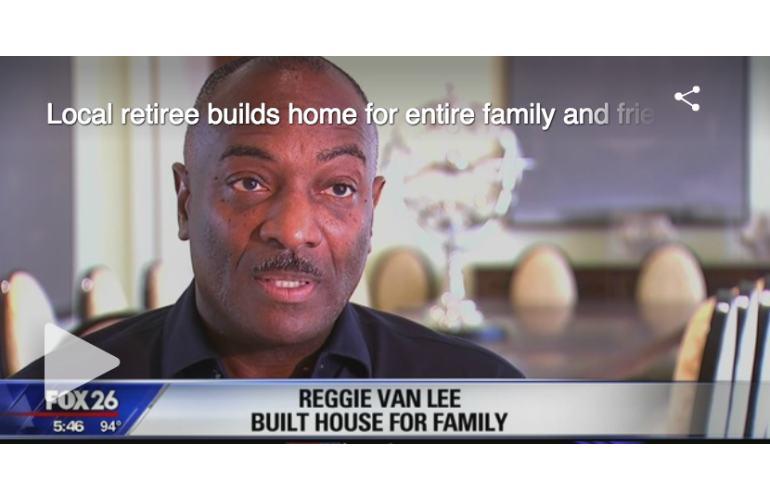 It takes a village. Reggie Van Lee, the 2008 Black Engineer of the Year, made headlines this weekend for his community impact.

“In 1976, this little black boy from Sunnyside (in southeast Houston) said I’d like to have a family compound someday,” he told FOX 26 Houston network.

Although many years went by before Van Lee’s dream would come true, his mansion now sits on land with a rich history that dates back to 1899, when it was bought by his great grandmother.

The residents include Van Lee’s family, his retired three sisters, a brother-in-law; their children and grandchildren.

They all have their own private apartments, with kitchens, living rooms, washer-dryer area, two bedrooms, master bedrooms, and guestrooms with separate bathrooms.

“There’s a hair salon for my [three] sisters, the pool is for their grand kids, and a [restaurant-sized] kitchen designed for this house,” Van Lee said.

The hallways are filled with artwork, and there’s a small church inside the house that is set among well-manicured trees and lawn.

“We all contribute to the pot of money that covers the food, housekeeper, groundskeeper, utilities,” Van Lee said.

“I think other people should do it,” he urged. “We’ll have more happiness in the world and a lot less tension,” he advised.

Before Van Lee retired as an executive vice president of Booz Allen Hamilton in August 2016, he had spent 32 years in international business, marketing, and management of technology companies.

A philanthropist with interests in the arts and education, he co-authored the book, “Megacommunities – How Leaders of Government, Business, and Nonprofits Can Tackle Today’s Global Challenges Together”

He co-led the Urban Enterprise Initiative with the William Jefferson Clinton Foundation and drove competitiveness in small businesses in Harlem. In 2008, the Consulting Magazine named Van Lee as one of the top 25 consultants in the world, and he was as one of the 2009 Washington Minority Business Leaders.

Van Lee is committed to helping parents, teachers, mentors, and advocates who serve our nation’s youth.

In recognition of his philanthropy, he received New York University’s C. Walter Nichols Award for outstanding community service, the Abyssinian Development Corporation Renaissance Award for his commitment to the Harlem community and the Percy E. Sutton Civic Leadership Award from the Apollo Theater Foundation.

Van Lee holds a master’s degree in business administration from the Harvard Business School as well as master’s and bachelor’s degrees from the Massachusetts Institute of Technology.

Growing up in Sunnyside, Van Lee had hoped to be an architect someday.

Sunnyside is the oldest African-American community in southern Houston. It once included a landfill, an incinerator, and several salvage yards.

On television, he saw visions of success. Young Reggie was an avid fan of Star Trek, the iconic science fiction series.

“I thought they were the heroes of the world,” he told USBE magazine in 2007.

Emulating that Trekkie success, he won awards in citywide science and engineering fairs, got hired as a summer intern at NASA in Houston, and earned a place in the Minority Introduction To Engineering And Science (MITES) Program at the University Of Houston.

In 1975, he went to Boston to study architecture at MIT. But he later switched to civil engineering and graduated with both bachelor’s and master’s degrees.

A year after he got to MIT, Boston was roiled by protests and riots against school desegregation.

Through a mutual friend, Van Lee got an invitation from Caroline Kennedy to visit the iconic Kennedy compound spread over six acres. off

That weekend trip to Cape Cod inspired big dreams in the student engineer from Sunnyside.