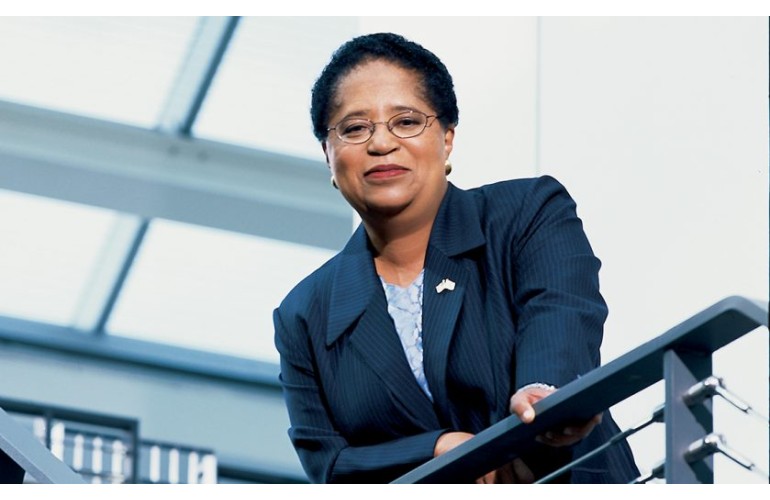 March is Women’s History Month. And as US Black Engineer Online joins institutions around the country in celebrating the role of women in American history, we also countdown to  International Women’s Day on Friday, March 8. All through this week, we will highlight women who have won the prestigious Black Engineer of the Year Award.

First up is ‘engineering’s first lady’ Shirley Ann Jackson.  She was named Black Engineer of the Year in February 2001.

“In this 15th-year of celebration, Career Communications Group, Inc., the Council of Engineering Deans of the HBCUs and corporate host Lockheed Martin have joined with other sponsors to recognize the achievements of African Americans in science and technology,” said BEYA Chairman and Career Communications Group CEO Tyrone Taborn in his conference message eighteen years ago.

A theoretical physicist with a long string of “firsts” during her distinguished career in education, industry, and government, Dr. Jackson was appointed the president of Rensselaer Polytechnic Institute, the oldest technological university in the U.S. in 1999.

She was the first African-American woman to lead a top-ranked research university.

Dr. Jackson was the first woman and first African American to serve on the U.S. Nuclear Regulatory Commission (NRC) and later became the first to head the agency from 1995 to 1999. While at the NRC, Dr. Jackson led the development of a new reactor oversight program and a license renewal process that resulted in the first renewal of the license of an operating reactor in the United States in March 2001.

If you could create technology to solve one problem…
A bioprocessor that monitors certain body conditions and then would dispense therapeutic medications in controlled doses. This type of biotechnology is just around the corner.

Have you ever considered giving up your work?
Even though I have had my share of challenges, I have never veered in my commitment to a career in science and technology. My peers would say I am not known for giving up anything. The simple beauty of science and engineering is that it allows me to be creative at so many different levels. I cannot imagine ever abandoning that.

An engineer, scientist, or mathematician you’d most like to talk with?
I would talk to Dr. Ernest Everett Just, a cell biologist and chairman of the Department of Zoology at Howard University from 1912 until his death in 1941. …Dr. Just, who published more than 50 papers during his career and seminal work on cell function, is an inspiring example of a brilliant modern research scientist who worked at a great disadvantage relative to colleagues. Another scientist, I would talk to is Leonardo da Vinci, who personifies our notion of the Renaissance Man -or Woman. I admire him for the curious all-inclusive way he looked at the world.