BEYA’s JobMatch draws praise for Pathway to Jobs and Internships 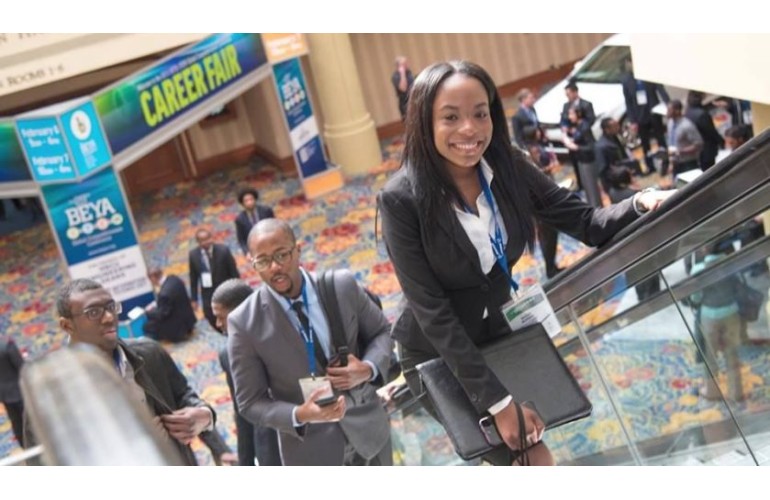 Career Communication Group’s Job Match Program places STEM interns and professionals in positions with major corporations and institutions. Through the program, students and professionals are given training in business etiquette, interpersonal skills, and team building, and are then certified.

Interviews are scheduled between October and early February, with the interviews taking place in February during BEYA’s STEM Conference held annually in Washington, D.C.

After one of Taylor’s mentors told her about the BEYA STEM Global Competitiveness Conference, she researched the event, realized she could attend the career fair at no charge and registered for the conference. Taylor explained she made a list of 10 companies, created a profile, and uploaded a resume to JobMatch Placement’s site.

“I began to research the companies to figure out which company would be the best fit for me and vice versa,” Taylor said in an email. “A few companies had virtual career fairs and hire fairs before the actual conference. Those are actually helpful. Personally, using the virtual hire fairs that companies had allowed me to create a connection with some of the recruiters before meeting them at the conference.”

One of the companies she researched was Raytheon, and she connected with a recruiter through a virtual fair. She was invited to interview with Raytheon at the conference and prepared for it by developing questions and going through two mock interviews.

“The hiring manager from Raytheon called me the next day and asked if I was interested in working second shift,” she said. “I told him I was very much interested. Two weeks after the BEYA conference, I received an offer from Raytheon.”

Today, Taylor, 27, is an electrical engineer II in the Integrated Defense Systems Department at Raytheon’s Andover, MA, location. She works in microelectronics electrical and technology. She praises virtual career and hiring fairs and says there should be more of them to give job seekers early access to potential employers.

“It’s another resource that students can use to not only seek employment for internships, co-ops, and full-time but to actually get those jobs,” Taylor said. “It’s also a great place to network.”

Taylor said the experience taught her a great deal about patience and being persistent.

“When interviewing with a company, make sure that you ask questions about the values, emerging technology, and ask the interviewer about their experience within the company,” she said.

For Tennessee State University student Tarence Rice, JobMatch and BEYA Conference career fair provided him with early access to an interview slot with Texas Instruments. It was one of two companies—Intel was the other—with which he was most interested in an internship opportunity during the summer between his junior and senior years.

His first interview on the job fair floor with a Texas Instruments manager was followed by a second interview at the event. Rice also had an interview at the career fair with Northrup Grumman for a software position.

“I was able to show them my skills and interest,” said Rice of the interview process.

About a month later, he heard back from Texas Instruments and was offered a 12-week summer internship. As a result, this past summer, Rice interned at Texas Instruments in Dallas, TX, where he worked in semiconductor testing. His position allowed him to enhance the testing process and ensure test results were valid.

“Working for Texas Instruments is an incredible experience. It has helped connect the theory discussed in courses with practical applications,” said Rice, 23, who is majoring in electrical engineering with a concentration in computers.

He said he was given a great deal of responsibility in his internship position, including conducting his own projects and presenting his findings to his peers. Rice, who’s on course to graduate in May, has been applying for fellowships in hopes of making graduate work his next step. Ideally, he sees himself working in artificial intelligence and machine learning in the future.