BEYA’s Matt Bowman hosts a town hall with a difference 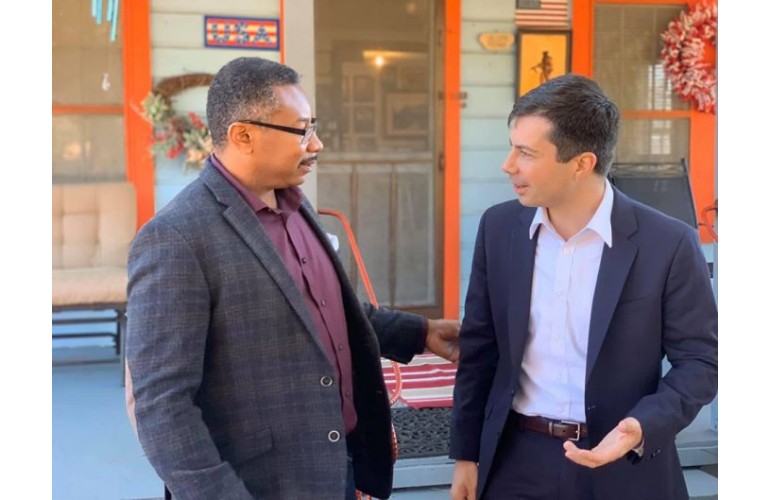 Matt Bowman is a well-respected figure in the BEYA Stars and Stripes circuit. The U.S. Navy veteran has  earned accolades for his work as a military project manager for Stars and Stripes, one of the largest events honoring African American admirals, generals and members of the federal Senior Executive Service at the Black Engineer of the Year Awards for Science, Technology, Engineering, and Math (STEM) Conference.

But Bowman has also made his mark in the world of black business. He’s a top executive with Bowman Vineyard, a black-owned Muscadine Vineyard located in Round-O, South Carolina.

The site is described as “a quaint vineyard nestled in the low country” and the land has been used by the Henderson/Bowman family from the late 1800s to 1960 as a tobacco farm. About two decades ago, the Bowmans turned it into a Muscadine Vineyard. Their specialties are red muscadine wine, white muscadine wine, muscadine juice, muscadine BBQ sauce, various jams, and hot peppers.

“Welcome to Bowman Farm and Vineyards,” said Bowman at the start of an outdoor USBE magazine-covered town hall he hosted in honor of Mayor Pete Buttigieg, a contender for the Democratic Party presidential nomination. “We’re going to have a discussion today about entrepreneurship. About the community and the way ahead for South Carolina and for the South at large. We brought with us, several leaders. Some of them national and some of them local. So, we can have a full conversation about entrepreneurship,” Bowman said in his introduction.

Also, in the meeting at the vineyard was Tyrone Taborn (second from right) who wears many hats as CEO of Career Communications Group, Inc., publisher of US Black Engineer magazine, and chair of the annual BEYA Science, Technology, Engineering, and Math (STEM) Conference. Taborn spoke on education policy impacting historically black colleges and universities (HBCUs).

In addition, there was  Mr. Stanley Campbell,  a Navy veteran, pilot, and entrepreneur who spoke about healthcare; Ms. Kitty Green and Ms. Dominique Total, part of the five counties that make up the Gullah Geechee community in the South, who spoke about rural development.

According to the Gilder Lehrman Center for the Study of Slavery, Resistance, and Abolition, the Gullah are a group of Black Americans from South Carolina and Georgia, who live in small farming and fishing communities. Experts say the Gullah have preserved more of their African cultural heritage than any other group. They speak a language like Krio spoken in my native Sierra Leone, use African names, tell African folktales, make African-style handicrafts such as baskets and carved walking sticks, and enjoy a rich cuisine based on rice.

“So welcome again, Mayor Pete,” Bowman said at the open-air town hall. “We’ll go national and then we’ll come local. So HBCUs are like a huge part. I’m an HBCU graduate, my parents are HBCU graduates. My children will be HBCU graduates. So, Dr. Taborn, what question do you have for Mayor Pete?

“One of the reasons why we’ve made that a central feature of our Frederick Douglass Plan for tearing down the barriers of systemic racism is because we see the pressure of HBCUs in cultivating that next generation of African American business leaders, civic leaders, doctors,” the mayor said.

“So, Mayor Pete, we’ve heard from Dr. Taborn about HBCUs, we’ve talked to Dominique and Ms. Kitty about the heart, about the land. But for me growing up here, when people say, “Matt, what is your story?” My story is homegrown vegetables,” Bowman said. “My story is picking apples off the tree or pecans off the pecan tree. So, I’ve had the opportunity to really have a military, a healthcare-focused life, and for so many African Americans, if your health isn’t right, the economics aren’t right. You want to be an entrepreneur, but if the healthcare isn’t right, and so today, Mayor Pete, I asked a friend of mine to come. He is a national healthcare leader. Everything that he talks about resonates in South Carolina. He is from Liberty city, one of five brothers. His parents worked as very modest professionals. I’ll let him speak to his story, but this is Stanley Campbell. He’s a Navy veteran. Pilot.”

Click here to listen to questions and answers about the rural broadband infrastructure, expanding access, health equity, risks of starting a small business without healthcare, entrepreneurship, and data in the 5G environment.