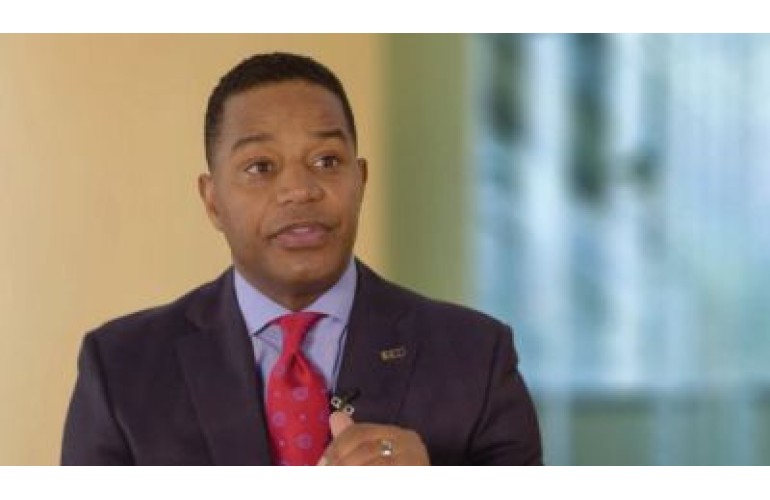 The future of delivering power to nearly 1.2 million customers is becoming more complicated and unpredictable. According to Calvin Butler, chief executive officer of Baltimore Gas and Electric (BGE), as interest grows in finding alternative energy sources, BGE experiences greater challenges in maintaining parity for all customers.

Butler, who took over leadership of Maryland’s largest natural gas and electric utility in March 2014, is pleased with where the company is today with 2014 revenues of approximately $27.4 billion. In fact, he pointed out that 2014 was the company’s most successful year to date citing unprecedented achievements in reliability (based on outages and length of outages), safety and customer satisfaction.

“The company is performing well,” said Butler. “We just have to sustain it.”

What lies ahead is a frontier of challenges that utilities such as BGE are just beginning to meet head on. Butler notes that BGE will celebrate its 200-year anniversary in June 2016, is the nation’s “first” gas utility. He said he’s proud to be part of a company “with such a rich history and long legacy.”

Headquartered in Baltimore, BGE delivers power to more than 1.25 million electric customers and more than 650,000 natural gas customers in central Maryland. Butler explained that as more customers turn to alternative energy sources such as solar panels and turbine generators, which reduce those customers’ utility distribution costs, BGE seeks ways to ensure that parity is maintained for all its other customers.

He said in 2014 BGE received three times the number of customer applications for renewable energy (primarily solar, but some wind) than the previous year. And some commercial users are adding on-site generators – some for backup, others for full-time use.

All these shifts to alternative energy sources mean less reliance on BGE with base utility distribution expenses shared among a narrowing pool of customers, Butler pointed out.

“People who can afford it are thinking about it,” said Butler of the interest in solar panels. “What happens to the rural community, low income? The cost shifts to them.”

“My whole focus is delivering value for our customers,” Butler said. He added that when customers have a choice of which company will deliver their electricity and gas, he wants them to choose BGE based on reliability and trust.

In 2015, BGE tied for second place in business customer satisfaction among gas utilities in the East region, according to J.D. Power. In the 2015 rankings, J.D. Power also ranked BGE 5th out of 17 is residential customer satisfaction among electric utilities in its region, a jump from the previous year when the company was in 11th place. Butler credits the company’s approximately 3,200 employees for the stellar stewardship of BGE, which is a subsidiary of Exelon Corporation, the nation’s leading competitive energy provider.

He wants employees not to think of the utility as a monopoly that takes its customers for granted but to seek to earn their favor and respect each day.

Butler, 46, was born and reared in St. Louis and lived in Chicago for 15 years. He earned an undergraduate degree in public relations from Bradley University in Peoria, Ill., and a law degree from Washington University in St. Louis.

Butler’s been with BGE and Exelon for nearly eight years. However, the path to CEO started when he graduated from law school and went to work for a utility company in central Illinois as in-house counsel, focusing on corporate and compliance law. He would go on to hold various positions including as a lobbyist who helped write the first deregulation bill in the country in the mid-1990s.

Before joining Exelon in 2008, Butler held management positions for eight years with the print, digital, and supply chain solutions company RR Donnelley, including vice president of manufacturing, senior director of government affairs and senior vice president of external affairs. He had been recruited by RR Donnelley to start its state and local affairs program. Butler also managed RR Donnelley’s supplier diversity and government sales groups and served as president of the company’s nonprofit foundation.

Asked about BGE’s relationship with historically Black colleges and universities (HBCUs), Butler said the company is fully committed. “We have a very significant involvement, and it’s still growing,” said Butler, citing BGE’s “strong partnership” with Morgan State University as well as other HBCUs such as Bowie State University.

BGE offers internship opportunities to college students, mostly in the summer, but also some throughout the year. Engineering, training, regulations and rates, as well as communications, are some of the departments in which interns are put to work. The work is meaningful and provides the young people with real-world experience and challenges.

“We are not having them get coffee,” Butler commented. The interns are paid, and Butler said about 20 percent of interns are later hired for full-time employment.

“I want BGE to be an employer of choice,” said Butler.

Butler advises young people to find what they are passionate about, what they enjoy. “Because people will pay you to do what you do.” He cautions against making decisions solely based on financial gain, explaining that such rationale can lead to short-term gain and long-term unhappiness.

He added that several of the moves he made probably left colleagues wondering what he was doing. The position he took at one of RR Donnelley’s plants was one that others may have thought was a step backward, Butler said. However that position – working second shift – was where he gained valuable experience and confidence in leadership, he points out.

“Does this step help me with my plan?” is a question Butler suggests young people periodically ask themselves. Learning to listen to one’s inner voice is also a key to maturing personally and professionally.

Butler, who moved to Maryland in 2013, is extremely civic minded and has been actively involved in the various communities in which he’s lived. He currently serves on the board of directors for the Greater Baltimore Committee, the Maryland Zoological Society and was the 2014 chair of the American Heart Association’s Greater Baltimore Heart Walk. He is on the board of governors for

The Center Club and is a governor appointee to the Private Sector Economic Development Commission. Butler is also a member of the Baltimore Community Foundation, the Enoch Pratt Free Library and the Economic Club of Washington D.C. He serves in multiple capacities at Bradley University – board of trustees, executive committee member and chair of student affairs.

“My plate is full,” said Butler. “At the same time, that’s what really drives me, looking at ways to make a difference.”