Black Engineers with a Global Impact 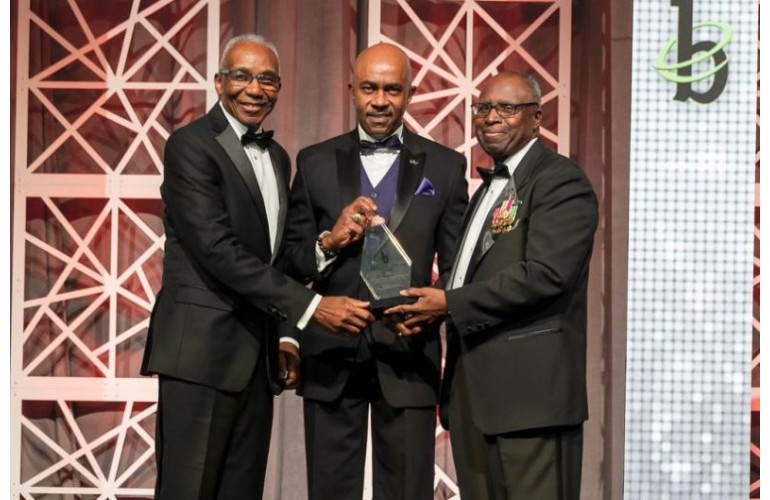 Ronald Johnson, (center) professor and fellow at The Georgia Institute of Technology, smiles as he receives the 2019 Educational Leadership Award for College-Level Promotion of Education at the HBCU Engineering Deans Breakfast during the BEYA STEM Conference this February.

Johnson is flanked by Eugene M. DeLoatch (left), the man who is credited with producing more black engineers than any other person in the history of U.S. higher education, and  Johnnie Edward Wilson, a retired United States Army four-star general who served as commanding general of the United States Army Materiel Command. DeLoatch, the 2017 Black Engineer of the  Year, retired from Morgan State University’s School of Engineering as dean emeritus.

Here on Black Engineer dot com, we celebrate engineers every day with amazing stories of success, overcoming challenges, and the different ways they engage young people in engineering activities. Today is extra special because it’s Global Day, the WORLDWIDE event that celebrates and recognizes engineers.

Below is an interview Professor Johnson gave US Black Engineer magazine recently.

How did you get into your line of work?
I have been a ‘teacher’ all my life.  Whether its tutoring classmates in school, as a Calculus professor at West Point, training engineer-soldiers as commandant of the U.S. Army Engineer School; and now as a professor at Georgia Tech. How did I get to Georgia Tech? A Georgia Tech graduate and contributor asked me to meet him in New York. I met him and he asked me to lead The Tennenbaum Institute of Enterprise Transformation.

After multiple visits to Georgia Tech and (job) interviews, I was offered the position as managing director of the institute and was dual appointed as Professor of the Practice in the School of Industrial and Systems Engineering. I have been at Tech for the past six years and have taught thousands of engineering majors.

What’s your best advice for a student thinking of engineering?
Take tough courses in high school, so that you can at least opt-out. In STEM, if you don’t get the right math, science courses, you cannot opt-in.

What inspired you to enter the science, technology, engineering, and math (STEM) field?
I have always been a math, science person–multiple awards in science fairs and excellence in academics all my life. It fascinates me.

Who’s had the biggest influence on your life?
The late Chief Warrant Officer Donald M. Lesch, my high school Reserve Officers’ Training Corps (ROTC) instructor. He saw things in me that I did not see in myself.  If it weren’t for him, I never would have thought of going to West Point.

How do you give back?
Endowed scholarships. Volunteering.  As a mentor for LEAD, an organization that teaches young black men to be better men through baseball. (LEAD has a) 100% high school graduation rate; 94% go to college, and 92% of those go to college on a baseball scholarship.

Which other accomplishments are you most proud of?

What’s next?
Who knows? Dean of Students…

What are some fun facts about yourself?
I am a fitness fanatic; can kick your butt in spin class, can do more sit-ups than you, and I can sing!

Favorite book
The Alchemist by Paulo Coelho. Life is ALL about the journey.

Favorite apps
ESPN, because I love sports. Flipboard, because I like to know what’s going on in the world.