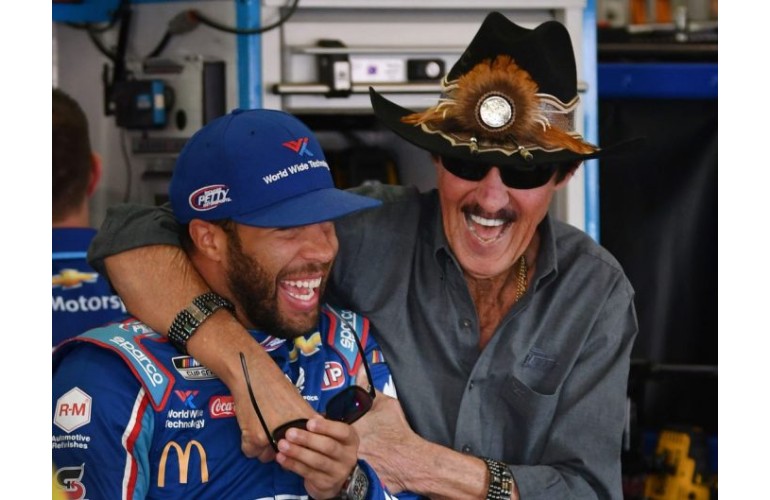 Not a lot of people know that one of the leaders who has made nationwide contributions to showing just how much science, technology, engineering, and math (STEM) impact daily life in America is Dave Steward, 2012 Black Engineer of the Year.

Steward is the chairman of the board and founder of World Wide Technology (WWT), one of the largest black-owned companies in the U.S. that sponsors Bubba Wallace.

Darrell “Bubba” Wallace Jr., photographed with his father in a June 2020 photo posted on Twitter, is a professional stock car racing driver. He competes full-time in the NASCAR Cup Series, driving
the No. 43 Chevrolet Camaro ZL1 1LE for Richard Petty Motorsports. On Nov. 8, 2017, Wallace pinned the above tweet to his official Twitter feed.

“There is only 1 driver from an African American background at the top level of our sport..I am the 1. You’re not gonna stop hearing about “the black driver” for years. Embrace it, accept it and enjoy the journey.”— Bubba Wallace (@BubbaWallace)

This week, FOX Sports released a video short  that is taking Twitter by storm.

“Who is Bubba Wallace?” is voiced by Bob Pockrass. The almost five minute video posted on July 7 has had more than 181, 200 views. Bob Pockrass reveals the man behind the headlines, wrote FOX Sports.

“You know NASCAR’s @BubbaWallace… even if you don’t really know him. @BobPockrass reveals the man behind the headlines.” — FOX Sports (@FOXSports)

While some responses applauded the Nov 8, 2017 tweet lauding Wallace’s breakthrough in racing,  and praised FOX Sports for producing a biopic that would be great for kids, new fans, and future drivers watching all over the world, critics challenged what they see as disproportionate emphasis  being placed on what appeared to be an incidence of workplace harassment: a noose was found in the garage of Wallace before a recent race at Talladega.  In response,  some Black Twitter users indicated that its wrong to ignore the factors affecting and shaping society.  Below is the statement that NASCAR issued on June 23.

“The FBI has completed its investigation at Talladega Superspeedway and determined that Bubba Wallace was not the target of a hate crime. The FBI report concludes, and photographic evidence confirms, that the garage door pull rope fashioned like a noose had been positioned there since as early as last fall. This was obviously well before the 43 team’s arrival and garage assignment. We appreciate the FBI’s quick and thorough investigation and are thankful to learn that this was not an intentional, racist act against Bubba. We remain steadfast in our commitment to providing a welcoming and inclusive environment for all who love racing.”

In the summer of 2018, Wallace and his team at Richard Petty Motorsports announced a deal with World Wide Technology (WWT), an information technology and data analytics company co-founded by Steward.

Mr. Wallace, I am very proud of you and your insight on the problems we have dealt with for many years. I have to son’s ages 34 and 19 years of age. I have had that conversation with them about how they are to deal with the police and that is sad because I worked in law enforcement for 42 years and only pulled my service firearm twice, so I know that there are other ways to enforce the laws without firing a shot.. Thank you for your courage to speak out on this topic. Keep up the great work and my prayers that you in your coreer and the fight. May God bless you and keep you safe
on tracks and in streets.