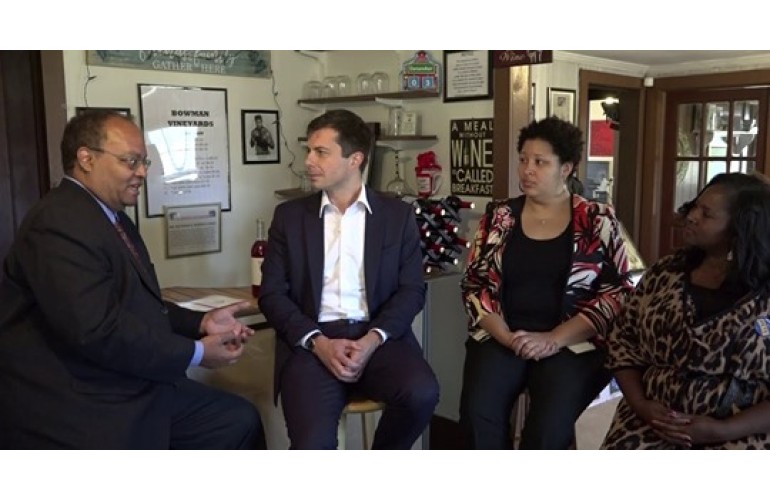 Mayor Pete Buttigieg sat down with  Career Communications Group CEO and publisher Tyrone Taborn in South Carolina this week, after a no-holds-barred op-ed on an old 2011 video began trending on Twitter.

The mayor of South Bend, Indiana, and a candidate for the Democratic Party nomination in the U.S. presidential election had a broad conversation with Taborn–publisher of US Black Engineer magazine– about historically black colleges and universities (HBCUs),  minority-serving institutions, unequal funding, and building opportunity for businesses.

“So historically black colleges and universities played a critical role in cultivating the next generation of black professionals,” Buttigieg said, flanked by two female members of his campaign team.

“And especially when we think about areas like engineering, like tech, medicine, and others where we need to correct that gap. There’s no way to solve that problem without turning to the HBCUs that have demonstrated just how good they are at addressing this,” he said.

Buttigieg called his Douglass plan “a proposal to set aside $50 billion in federal support directly for HBCUs and minority-serving institutions,” adding that the number one goal he would assign to funding is “this question of how do we help people get pathways into these career fields? Where maybe they’ve never seen somebody who looks like them in some of these careers.”

Over four decades and counting, Career Communications Group (CCG) has invested in print and digital magazines such as USBE, Hispanic Engineer, and Women of Color, as well as annual conferences and career services, focused on science, technology, engineering, and math (STEM)

“This will be of particular interest to you, ‘Becoming an Engineer,’ Taborn said, recommending a high school career guide newly published by CCG. Featured on the pages of the booklet are a few of the hundreds of STEM professionals that have won awards at CCG conferences since 1987.

“That’s great,” Buttigieg replied and shared a story about a partnership which he said “brought together” the University of Notre Dame, a local community college, high school, the campus of Indiana University, and the neighbors.

“But how do you see, truly, these historically black institutions and minority-serving institutions?” Taborn pressed.

“What is your plan with the Douglass Plan in really addressing building infrastructure,” he continued. “Even though the dollars have been cut significantly under the last couple of administrations. I’m talking about building significant infrastructure.”

Buttigieg answered that partly it was about making sure plans provided the infrastructure, resources on campus, built a relationship with employers, and supported college completion for first-generation students.

“It’s not just about affordability, no question you got to deal with that,” he explained. “But also making sure they get the resources to ensure they graduate because the biggest problems for folks with student debt usually happens when they fall short at graduation but still carry that debt. And so part of it’s investing in the physical plan, a lot of it’s investing in people and that’s where I think we’ll get the biggest payoff.”

In 2006, Taborn was one of the leaders in the Black community that worked with Tavis Smiley to create a national plan of action to address the most crucial issues facing African Americans.

“In The Covenant With Black America, which was a New York Times bestseller, I wrote the chapter on technology,” Taborn said, “What I recommended, my list of recommendations was that we create a federal research center built around the HBCUs. That will be similar to what MITRE has done. Applied physics labs, and the HBCUs could collaborate and their federal dollars would always exist. What do you think of something like that?” asked Taborn.

“I think it’s a really smart approach,” replied Buttigieg. “Because what you’re doing then is a lot of dollars that are programmed anyway in order to support research, but it could be programmed in a way that meets our other goals too,” he said. “I mean we’ve seen just from how some of the universities in my own backyard chase these grant dollars and when it goes well, it’s community economic development as well as building up the university, building up the next generation of researchers, supporting faculty. And supporting that end goal of what the research is actually for. So I hadn’t thought about it in those terms, but I’m glad you raised it because it’s a great example of how we can bring purpose to that fund.”

Taborn, who’s just ended a six-year term as trustee on the Morgan State University Board, said when it comes to “equity of dollars” HBCUs have a hard time winning on the federal level.

“How would we guarantee that the federal agencies live up to a certain part of their budget going to the HBCUs? Many of them are not getting those goals,” he said.

At that point, the conversation segued to venture capital, big tech in low-income neighborhoods, the digital divide, publicly available Wi-Fi, and empowering young people to understand how their relationships with technology could help them as entrepreneurs, employees or just as citizens.

“One of the things I’m proposing is that we add the capital that goes into community development financial institutions (CDFIs) that have a better track record than commercial banking in general of supporting minority entrepreneurs but don’t always get the flows of capital they should,” Buttigieg said. “They’re very successful when they get the chance. So I would increase the CRA (Community Reinvestment Act) credits that go for funding these CDFIs. Another thing that I think is really important is being willing to co-invest. We’ve seen this in Maryland with the TEDCO (Technology Development Corp.) model, where that kind of co-investment really unlocks companies that have the potential to generate great returns, but never get to scale.”