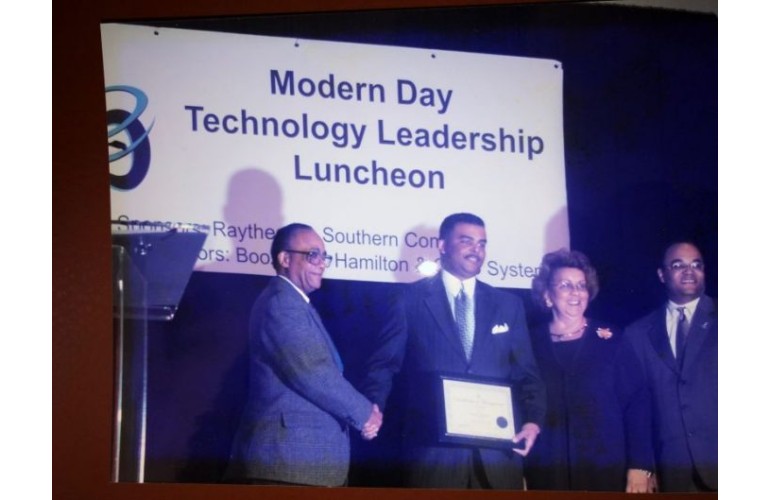 “I was amazed at the many doors they opened for young technology professionals like me,” said Bass, who is currently a client sales executive at Siemens PLM Software.

Bass confesses that he has not attended a Black Engineer of the Year Awards (BEYA) STEM Conference since because of job demands and schedule conflicts. But he promises to “do better.” Talking about life after his award on LinkedIn during BEYA Week (February 3-9) Bass had this to say:

“My area of responsibility has changed since I received the Modern-Day Technology Leader Award. It is amazing some of the things I have accomplished in a 25-year career. I owe it to the ‘angels’ that I have met along the way,” Bass said.

One of those angels is Hulas King, a now-retired executive from Siemens, speaking at the podium for a top supporters event.

“He saw something in me and he worked tirelessly to promote my skills,” Bass wrote. “It was people like Hulas and many others outside of Siemens that were my biggest cheerleaders. That is why I am a firm believer in using my talents to lift up the next wave of technology leaders,” Bass said.

As part of the Memphis Alumni Chapter of Kappa Alpha Psi Fraternity, Inc. in Tennessee, Bass works with a program called Kappa Days of Caring.

“We partnered with Siemens in promoting science, technology, engineering, and math (STEM) to kids in elementary, middle and high school. We called our program the Mobile STEM Initiative for Memphis Youth. Siemens Industry Software donated laptops to us,” Bass explained.

The STEM-focused content was also provided through a partnership that Siemens has with Discovery Education.

“It is so important that kids that look like me see the possibilities of where STEM can take you in life,” Bassa said. “We have delivered STEM events at the Salvation Homeless Shelter. We believe in exposing kids no matter their current position in life to the advantages of STEM. You have to show kids what the end game is with academic excellence. Thanks for asking me about my life after BEYA 2004.”

I am so proud of you for the work you do for others. Keep up the excellent work.
Shirley Bass

ACHIEVEMENT in every field of human endeavor…👌🏽
Keep blazing trails into new territories.