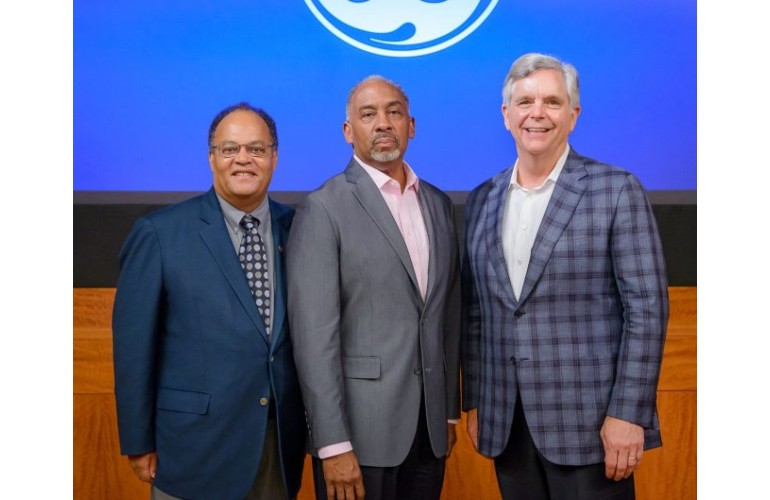 GE announced Friday that Senior Vice President and GE Digital Chief Technology Officer Dr. Colin Parris (standing center in this photo taken at the reveal) will be named 2023 Black Engineer of the Year at the 37th annual Black Engineer of the Year Award (BEYA) STEM Conference for his significant contributions to the fields of science and engineering and his work in digital transformation.

Over his 35-year career, Dr. Parris has contributed significantly to the fields of science and engineering with his groundbreaking work in digital transformation across multiple industries, including banking, retail, high-performance computing, manufacturing, healthcare, aviation, and energy.

Today at GE, he is applying digital innovation in partnership with some of the world’s largest energy producers and utilities to accelerate the world’s transition to a cleaner and more secure energy future.

In the press release, Chairman and CEO of GE and CEO, GE Aerospace H. Lawrence Culp, Jr. (right) said, “Colin’s extensive knowledge across multiple industries—software, energy, aviation, healthcare, banking, and manufacturing—has been invaluable to GE. In addition to his many contributions to the industry, Colin is also a very committed mentor and sponsor of STEM talent, making him an ideal candidate for the Black Engineer of the Year Award.”

Dr. Parris joined GE as Corporate Officer and Vice President of GE’s Software and Analytics Research at the GE Research Center in Niskayuna, New York in 2014. In that role, he led the creation, development, and application of industrial analytics, artificial intelligence, machine learning, and software systems research broadly across GE.

A central part of this portfolio is GE’s industry-leading Digital Twin Initiative, which he created and still leads today. Digital Twin is a leading-edge engineering modeling and data analytics capability that allows the modeling and control of industrial assets to increase their availability and performance and optimize their economic value.

Dr. Parris has written over 300 articles on Digital Twin, industrial AI, artificial intelligence, power systems, and machine learning and has published multiple technical papers, and holds several patents. He is committed to pushing the boundaries when it comes to modern-day innovation and leading the next generation of GE engineers in doing the same.

Prior to GE, Dr. Parris spent twenty years with IBM focused on the digital transformation of many industries as the internet era began. Before that, he worked at AT&T Bell Laboratories as a Member of the Technical Staff, where he conducted research and advanced development in high-speed telephone switching systems and algorithms.

Tyrone Taborn, CEO of Career Communications Group, Inc. (CCG) said, “Dr. Parris is a great example of this year’s conference theme—becoming everything you are. The work he has done throughout his career shaped history, and his innovative mind and passion for finding solutions through technology allowed him to break barriers and improve industries. We are honored to recognize him with the Black Engineer of the Year Award.”

Earlier this year, Dr. Parris was named the 2022 Business Intelligence Group (BIG) Innovation Award winner. He was also one of three GE engineers elected and inducted into the National Academy of Engineering (NAE) in 2022.

Dr. Parris said, “I am honored and humbled to have been named this year’s Black Engineer of the Year. Over the course of my career, I have been fortunate to belong to diverse and talented teams that have helped make my achievements possible. This award is just as much theirs as it is mine.”

Dr. Parris will be presented with the 2023 Black Engineer of the Year Award at the 37th annual BEYA STEM Conference, which will be held February 9-11, 2023, at the Gaylord National Resort and Convention Center in Washington, D.C. Dr. Parris has been recognized at the BEYA STEM Conference twice in the past, with the Dean’s Award in 1998 and the Professional Achievement in Industry Award in 2009.