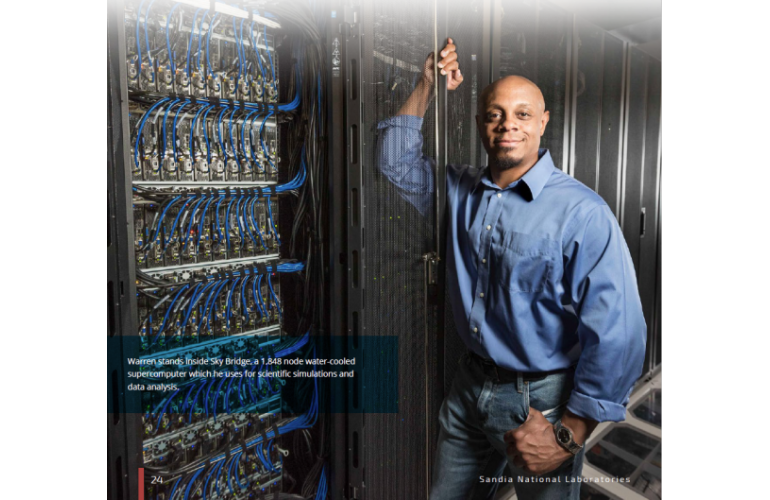 Davis leads research that has the potential to revolutionize the way scientific simulation on supercomputers collect and analyze anomalous events. His team has already developed two anomaly detection algorithms and the capability to embed machine learning algorithms into supercomputer physics simulation code. He is currently applying this research to climate, combustion, and turbulent flow modeling.

“Dr. Davis leads advanced scientific computing research and Congressionally-awarded research and development projects,” said  Dr. Victor R. McCrary at the 2019 BEYA Gala in February. McCrary who is vice president for research and graduate programs at the University of the District of Columbia, was named the Scientist of the Year at the 2011 Black Engineer of the Year Awards (BEYA) Science, Technology, Engineering, and Math (STEM) Conference.

Davis has applied his expertise in machine learning to domains such as computational physics, biochemistry, and cybersecurity. The winner of the 2019 Research Leadership Award, Davis was recognized for his ‘service to the nation, compassion, and loyalty to his team, a thirst for lifelong education, and humility.’

“When I was a child my family noticed early on my passion for science,” Davis said in his speech at the BEYA Gala. “They mentored and supported me; buying encyclopedias, microscopes, computers, and whatever else I would need to fulfill my education. Later in life, while I pursued graduate degrees, my graduate advisors supported me by helping me overcome various obstacles. Today as a research leader at a premier national laboratory I have the opportunity to drive scientific discovery while simultaneously advancing the security of our nation. Perhaps most fulfilling is that I am in a position to give others the same mentorship and support that propelled me,” he said.

Davis is active in organizations such as the Institute of Electrical and Electronics Engineers (IEEE), Association for Computing Machinery,  which advances computing as a science and profession, and American Mensa.