Democratic nominees for Gov. and Lt. Gov. have accomplished many firsts 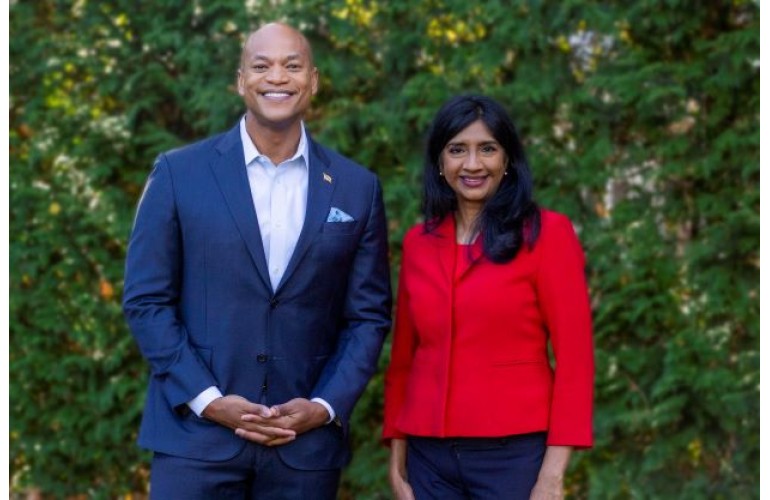 This weekend, Wes Moore, a combat veteran, bestselling author, small business owner, Rhodes Scholar, and former CEO of an anti-poverty organization, was declared the Democratic nominee for governor in the 2022 Maryland gubernatorial election.” On behalf of my family and my incredible running mate Aruna Miller, Thank you,” he tweeted. “The stakes could not be higher, but together, we’ll meet this moment with urgency and leadership. Maryland will be a state where we leave no one behind.”

If elected, Westley Moore, (born October 15, 1978), would be the first Black governor of Maryland. Moore is the author of The Other Wes Moore and The Work, both of which are New York Times bestsellers. He was also the executive producer and a writer for Coming Back with Wes Moore on PBS.

Moore is the founder and CEO of BridgeEdU, a social enterprise dedicated to helping students in their transitions to the freshman year of college. A Baltimore Banner interview with former BridgeEdU students found that the program supported them in their first year, helping them to progress toward graduation. Wes Moore is married to Dawn Moore. They are parents to Mia Moore and James Moore.

On behalf of my family and my incredible running mate @ArunaMiller, THANK YOU.

The stakes could not be higher, but together, we’ll meet this moment with urgency and leadership. Maryland WILL be a state where we leave no one behind.#MooreForMaryland pic.twitter.com/j3mcncfKWZ

Aruna began her career as a civil engineer, working for 25 years for Montgomery County. In 2010, she was elected to the Maryland House of Delegates where she represented the 15th District and served on the Appropriations Committee. She lives in the 6th Congressional District with her husband, David. Aruna and David also have three adult daughters Meena, Chloe, and Sasha.

“Our mom is an inspiration,” the siblings wrote in a campaign letter. “As a working mother, she juggled raising a family, caring for aging parents, and working full time while we were growing up. And she’s dedicated her work to public service as a civil engineer, a leader in the Maryland House of Delegates, and now as a candidate for US Congress.”

Aruna, a former Maryland House of Delegates member representing Legislative District 15 in Montgomery County, ran for Congress in 2018 to represent Maryland’s 6th congressional district. But she nd did not advance to the general election. Still, in 2021, Wes Moore chose Miller as his running mate in the Democratic primary of the 2022 Maryland gubernatorial election.

Aruna Katragadda was born on November 6, 1964, in India. Her family came to the United States when she was seven years old. She lived with her two siblings and parents in Poughkeepsie, New York, where IBM employed her father as a mechanical engineer. She attended public schools in upstate New York and Ballwin, Missouri.

Miller earned a Bachelor of Science degree in civil engineering from the Missouri University of Science and Technology. She first worked as a transportation engineer in Los Angeles County, California, and then, for over 25 years, in Montgomery County, Maryland.

In 2015, she retired from Montgomery County to devote full attention to her service in the Maryland legislature. Miller was a candidate for Congress in 2018 to represent Maryland’s 6th congressional district. During the election, she was endorsed by the National Education Association. Miller was the lead sponsor of a bill that mandates that all high schools offer at least one high-quality computer science course and encourages local school districts to integrate computer science into their earlier grades.

One of Miller’s first actions after being elected to the Maryland General Assembly was to co-sponsor the Marcellus Shale Act of 2011, which laid the groundwork for the eventual passage of Maryland’s fracking ban, which she co-sponsored. In 2013, Governor Martin O’Malley appointed Miller as a commissioner to the Interstate Commission on the Potomac River Basin. Through regional and interstate cooperation, the mission is to enhance, protect, and conserve the Potomac River’s water and associated land resources and its tributaries.

In 1990, Miller moved to Montgomery County, Maryland, where she married her college sweetheart, David Miller. She has three adult daughters. Miller’s mother lives with the family in Darnestown, Maryland. Miller maintains her activism in community organizations and serves on the boards of Round House Theatre, Montgomery Parks Foundation, Emerge Maryland, and Madison House Autism Foundation. She has also served as a BlackRock Center for the Arts and the Montgomery County Public Schools Educational Foundation board member.

.@iamwesmoore and I are so humbled that Maryland voters have chosen us to be the Democratic nominees for governor and lieutenant governor. We built a coalition that looks like the state of Maryland and we look forward to building on that community to win this election. (thread) pic.twitter.com/BDXMwi1aoK