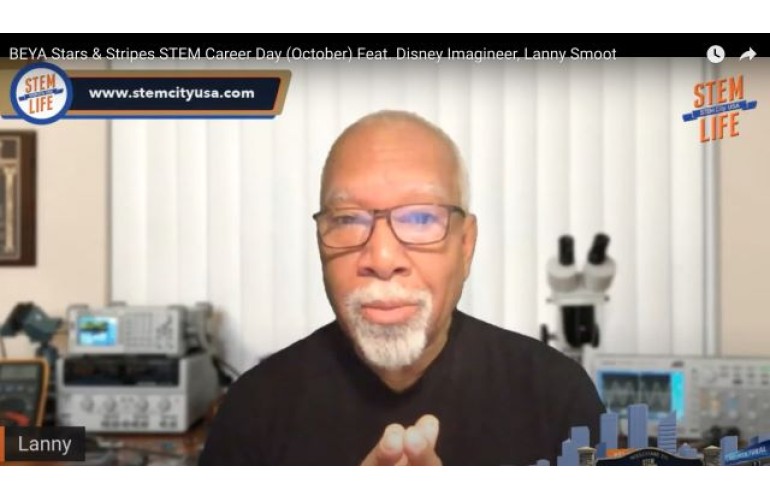 Disney Imagineer and research fellow, Lanny Smoot, graced BEYA Stars & Stripes Career Day Saturday to give insights on what it means to be a Disney Imagineer and provide career advice for those interested in following in his footsteps. Smoot was an award winner for Most Promising Engineer at the first BEYA conference in 1987.

The event took place in STEM City USA, a platform used to make connections between STEM professionals, students, and anyone else interested in the world of science, technology, engineering, and math.

But what is a Disney Imagineer? This is the official term the Walt Disney Company uses for the people who are in charge of researching and developing ideas for the company. They design and build Disney theme parks, attractions, cruise ships, resorts, and much more. Imagineers create the magic behind Disney parks and resorts around the world.

Smoot has over 100 U.S. Patents, making him shine amongst his peers in the Walt Disney Company. He shared some of his favorite projects thus far including the Madame Leota crystal ball and the changing portraits in the Haunted Mansion as well as the interactive koi fish floor in Hong Kong Disneyland featuring digital koi fish that splash and scatter when feet movement is detected.

Born in Brooklyn, New York, Smoot said he didn’t have much growing up as he lived in a low-income neighborhood, but that didn’t stop him from expressing himself through imagination. At an early age, he knew he wanted to work in science and engineering. In his later years, he attended Brooklyn Technical High School.

Smoot said he has always been an inventor and recalled a time when he built his own unicycle because his family could not afford to buy one. His father noticed him riding this contraption but felt he deserved a better version and bought him his first unicycle.

“About two or three months later, I come to find a brand-new unicycle, leaning up against my bed and I went crazy,” Smoot said. “I know dad can’t afford this kind of stuff.”

During his senior year, Smoot was accepted to MIT and Columbia but couldn’t afford to attend those universities. His parents had not attended college, and he had not taken the time to find out about college recruiters and the many scholarships offered to young people.

“This is something I don’t want you to do if you’re a young person,” Smoot said. “Because I was at a good school, colleges came to the school to recruit kids to go to college and would be offering scholarships.”

However, one day as he was sitting in class, Smoot heard his name over the loudspeaker, asking him to report to the principal’s office. His first thought was, “what did I do?” but he wasn’t in trouble at all. In fact, he was introduced to Jim Stewart, who was recruiting for a program in Bell Labs, a research and engineering company. The program introduced Black students to careers in STEM and Smoot jumped at this incredible opportunity.

At Bell Labs, Smoot began his career designing circuitry for telephone systems in rural areas, a job that allowed him to travel frequently.

Today at the Walt Disney Company, Smoot is the brain behind the iconic entertainment that can be experienced exclusively at Disney theme parks and resorts. He said Walt Disney himself envisioned providing a look into the future for all his guests, a legacy Smoot hopes to carry on.

Smoot’s presentation at Career Day was a success in inspiring young people like BEYA Career Day Teen Ambassador, Salihah Hurst, who said she felt inspired seeing someone like Smoot achieving such a high level of success.

“I was excited to learn about Mr. Lanny Smoot’s career at Disney. It is nice to see someone who looks like me rising to one of the highest career levels at such a well-known company,” Hurst said.

We are excited to report that longtime Walt Disney Imagineering Research & Development Imagineer and Disney Research Fellow Lanny Smoot just received his 100th career patent from the US Patent and Trademark Office – a first for anyone at The Walt Disney Company.  His 100th patent (number 11,080,779 – “Systems and Methods of Presenting a Multi-Media Entertainment in a Venue”) was issued earlier today. This is a milestone not often achieved by many inventors and makes Lanny one of the most prolific Black inventors in American history, based on patents issued, according to Disney patent attorney Stuart Langley.

Seventy-four of Lanny’s patents were from his research and inventions at Disney. Some of his favorite creations are included in past projects like Kim Possible World Showcase Adventure and “Where’s the Fire?” at Innoventions, both formerly at EPCOT; current projects including many of the special effects guests love in the Haunted Mansion, the lightsabers used in Star Wars Launch Bay, the virtual and interactive koi ponds at the Crystal Lotus Restaurant at Hong Kong Disneyland Hotel, the Fortress Explorations interactive adventure at Tokyo DisneySea, and “Power City” at Project Tomorrow in the post-show area for Spaceship Earth; and upcoming projects like the new state-of-the-art lightsaber and the lightsaber training experience, both of which will be a part of the Star Wars: Galactic Starcruiser multi-day experience coming in spring 2022 to Walt Disney World Resort. In addition, many of Lanny’s inventions haven’t yet found a home in Disney parks and resorts including patents for new ride systems and 3D displays where you don’t need to wear 3D glasses.

Additionally, he is the recipient of many awards and honors, including three Thea Awards from the Themed Entertainment Association (Finding Nemo Submarine Voyage at Disneyland park, Kim Possible World Showcase Adventure at EPCOT, and the Ghost Post limited-time experience inspired by the Haunted Mansion). Additionally, he was recently named a 2020 TEA Master, also by the Themed Entertainment Association.

Before Disney, Lanny worked at Bell Laboratories and then Bell Communications Research. While at Bell, Lanny earned patents for his work in the early development of video-on-demand technology, video conferencing, a television system for displaying multiple views of a remote location, and fiber optic receivers that can be used in harsh temperature environments.

I think it’s safe to say that Disney Parks would not be the same today without the amazing inventions from Lanny Smoot. Congratulations, Lanny, on this remarkable achievement. I can’t wait to see what you dream up next!