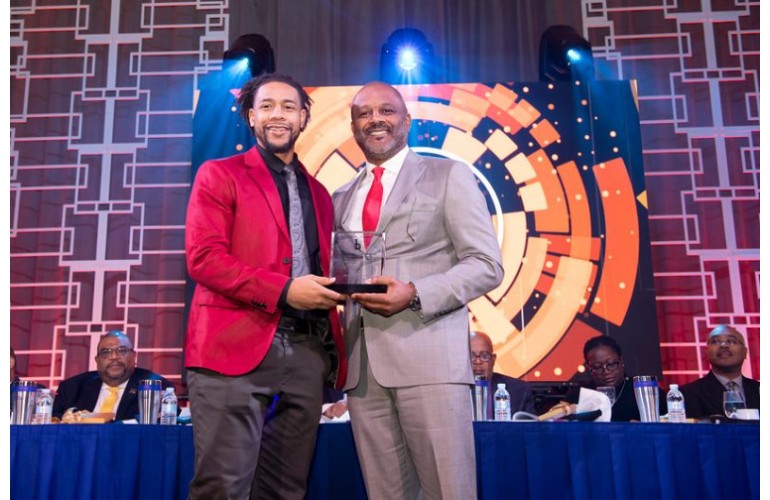 This year the Edward T. Welburn Legacy Award went to Corey Randolph, who went from being an intern at Nissan to earning the role as a lead electrical engineer for the Nissan Leaf. He is now a valuable resource in the zero-emissions technology development team of Nissan Technical Center of North America.

The presenter of the award at BEYA’s Engineering Deans Breakfast in February was Gerald Johnson (left), a BEYA winner himself, and currently the executive vice president for global manufacturing at General Motors (GM).

The Edward T. Welburn Legacy Award is named for the 2015 Black Engineer of the Year. He joined GM’s design staff in 1972 and made history in 2003 by becoming GM’s Chief Designer, the first black American to achieve that position at any automaker in the world.

Ed is the sixth design leader in the entire history of General Motors, and the first to lead the organization on a global basis, creating a network of ten Design Centers in seven countries: the United States, Germany, Korea, China, Australia, Brazil, and India.

Corey Randolph, the recipient of the 2020 Edward T. Welburn Award, joined Nissan as a young electrical engineer starting his career after college. As a new member of the Zero Emission Team, Corey was given responsibility for charging infrastructure compatibility with the next-generation electric vehicle platforms.

His dedication to the team and desire to use every opportunity as a learning experience led to earning the role as a lead electrical engineer for the Nissan Leaf. Currently, he is also the representative member for electrification on the Nissan Innovation Team. His persistence in achieving creative, technically sound solutions has helped drive the future of Nissan.

“The evening before my first engineering course, I remember settling down from the overwhelming festivities of freshman welcome week to review the syllabi for my upcoming classes,” he said on receiving his award. “Somehow I missed an assignment due in the morning. I started working, but as the difficulty increased and time slipped away, I felt my throat clenching and tears swelling. Through feelings of failure and disappointment I called my dad. I remember him saying, ‘Do your best now, learn from this, and move forward.’  His wisdom continues to help me with my dreams and challenges. Appreciate those who believe in you, support those who look up to you, and most importantly, do your best now, learn, and move forward,” Randolph advised students at the HBCU Engineering event.