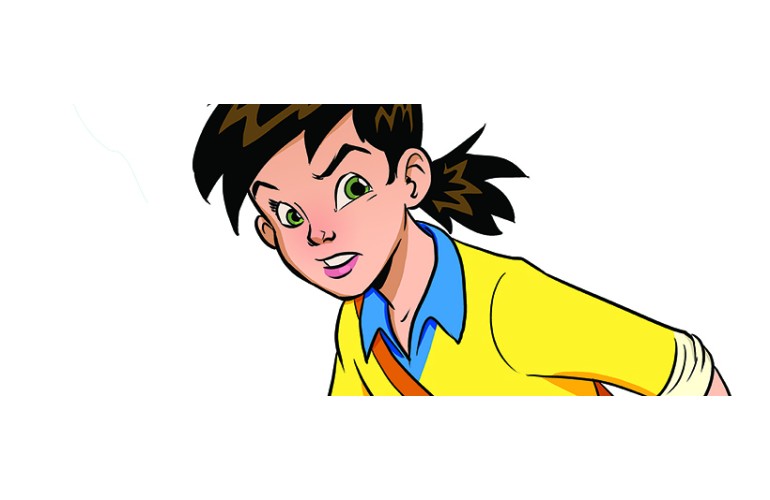 Anthony Onesto is the proud dad of Ella, and he is also an entrepreneur. A few years ago, he was an executive in a company that had a bunch of coders and data scientists, about 1,000 of them.

Of those thousand coders and data scientists, only 10 were women. That’s when he knew the business had a problem.

“Why was this? Why is this happening? He asked at a TEDx Youth@Hewitt event.

Anthony found that the problem of too few women in technology wasn’t just a problem in his company. It was a global problem.

In the United States, women in science, technology, engineering, and math (STEM) make up only 24 percent of the workforce. Only 1 in 7 engineers are female. Women are also underpaid in these jobs. For every dollar earned by a man in STEM, a woman makes fourteen cents less.

Only sixteen percent of STEM professionals in family movies are women. The media also continues to portray programmers as geeky men. He also found out that while more men are coders, women are better at coding, according to a U.S. News & The University of Washington blind survey.

So, Anthony reached out to all his children—his older daughter, Nicollette, and his son, Frankie.

Anthony found they watched TV programs like Sid the Science Kid, Peppa Kid, and Teen Titans Go!. Then he looked at ‘live actions’ where humans are in the shows. He began to see a pattern. Although some media companies had done a good job of portraying strong women in movies and television roles, none of them were involved in computer science or technology.

Anthony couldn’t draw, and he didn’t think he was a great storyteller either. But he decided to create a comic book named after his youngest daughter, Ella. The character in the comic was a computer engineer.

In a few months, Anthony was able to launch “Ella the Engineer” with the help of a famous cartoonist and a writer who worked in the gaming sector.

“It’s Bob the Builder meets Handy Manny,” Anthony said. “Every episode, something would go wrong with technology, and they wouldn’t call a boy; they’d call Ella. She had Tabby, her tablet, Mac, her trusted computer, and then Smarty, which was the Smart Alec phone that she carried around.”

Ella was also surrounded by her friend, Rubik, grandparents, and Glitch, her antagonist. The stories ranged from things that were very common in the everyday life of a teenager, such as a glitch messing up her grandparents’ GPS.

For Ella 2.0, the teenager got more friends who all had an interest in science, technology, engineering, and math and a brother who goes to MIT.

Together with Deloitte Consulting LLP, Anthony has just announced a new comic book series, with the goal of exposing more girls to STEM in a fun and unique way. The series is designed to reach girls early on, so they will be exposed to STEM as a career choice when they are young.

Some of the women in the new series include the CEO of Deloitte, Janet Foutty.

As chairman and chief executive officer of Deloitte Consulting, Janet leads a $9B business comprised of over 45,000 professionals helping Fortune 500 companies and government agencies translate complex issues into opportunity. She is also a member of Deloitte’s Global Board of Directors.

Another Deloitte woman in the story is Nishita Henry, Chief Innovation Officer of Deloitte Consulting LLP. In this role she drives the firm’s innovation agenda by working with cutting-edge technologies, engaging the startup community and driving the transformation of next-generation technologies into practical solutions for Deloitte’s clients.

“If you can see it, you can be it,” is the motto that drove the creation of  Ella the Engineer,” says Anthony, who is on a mission to show strong girls in tech in children’s cartoons and comics.

Anthony is the founder of The Ella Project mentorship network, which is designed to encourage young girls to pursue careers in STEM and create a more gender-equitable future. As Chief People Officer of Suzy, Anthony leads HR for the consumer insights platform.

Before becoming the Chief People Officer at Suzy, Anthony founded KAE.ai, an artificially intelligent human resource agent that augments human resource (HR) departments. As the first head of HR for FreshDirect, Anthony took the business from 30 to 2,000 employees in five years.

He has also helped build and scale startups throughout his career, including Zeta Interactive, SolidStreaming, Savos, and Big Fuel. Anthony frequently sits on panels and speaks at innovation, digital transformation, startup and HR conferences.