Eugene DeLoatch: The Fifty-Year Career of the ‘Best of the Best’ in Engineering 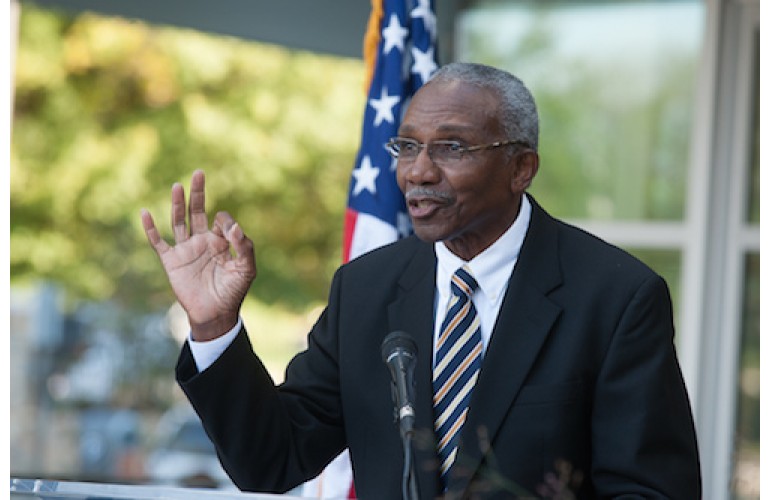 What do you get from the White House after 50 years in American education?

The personalized message that came in a special envelope recognized the engineering icon as the “best of the best” in the field of engineering.

DeLoatch is the founding dean of the Clarence M. Mitchell, Jr. School of Engineering at Morgan State University in Baltimore.

Prior to beginning his service at Morgan in 1984, Dr. DeLoatch spent 24 years with Howard University in Washington, D.C.

His last assignment there was as chairman of the Department of Electrical Engineering, a position he held for nine years.

Dean DeLoatch is a past president of the American Society of Engineering Education, (ASEE). At the time of his election to the presidency of ASEE in 2002, he became the first African American to hold that position in its history.

Morgan State’s University Clarence M. Mitchell, Jr. School of Engineering has earned an outstanding reputation for academic excellence in the preparation of undergraduate and graduate students since its inception in 1984.

Recently, USBE Online’s career editor spoke to Dr. DeLoatch about his more than 50-year career in engineering education. Here are the excerpts.

I can’t think of a better thing I could have done, from the time I started as an instructor in engineering at Howard University. It couldn’t have been a better thing to do because it did start my professional career.

It was about wanting to expose as many young people to a field little known, as I see it, in the African-American community –a very critical field for the progress of this nation.

When I left school, less than one-half of one percent of all the engineers in the country was African American. It was an area where we had little knowledge of, and participation in, when I graduated with my first engineering degree.

It had nothing to do with capability, but the way engineering grew.

So I had an opportunity to expose others to something of value.

Engineering, over the last 50 years certainly, and over the last 30 years, and my time as a dean, has had such a tremendous impact on the lives of people around the world.

Move back to the advent of computers to today’s personal, carry around smartphones that have more power than some of the things we had access to in the late 1970s. That’s a relatively short period of time, thirty years, and twenty-five years.

So when you look at that, from Morse code and the telegraph to now, that movement is telling me that the next twenty-five to 50 years will be wow!

1. People will have to be more globally in tune.

We’ll have to understand and appreciate not just our similarities, but also our differences. If we don’t do that, if we can’t accommodate each other, then it’s going to be very challenging.

Be more like engineers in our thinking. Have more abilities, more languages, and more knowledge of other cultures. I see engineering as a merging together and more balancing of the cultures.

We’ll have to expand to other habitats. This planet will not be able to hold us as we’ve come to know this planet. I see space travel very strongly in 50 years.

It’s trying to look back and go forward; find ways to grow, expand and communicate in the universe, because we cannot have a lack of appreciation for the rights of others.

4. We’re going to have to coexist.

With Man, coexist with the environment, and societies are going to have to be network-focused systems. Instead of growing apart, come together.

Between technology and all this knowledge of things we were talking about, nations rising and people, how do we cope with all that as a world?