Falls and Aging: The Need for Next-Gen Biomedical Solutions with Lara Thompson, Ph.D. 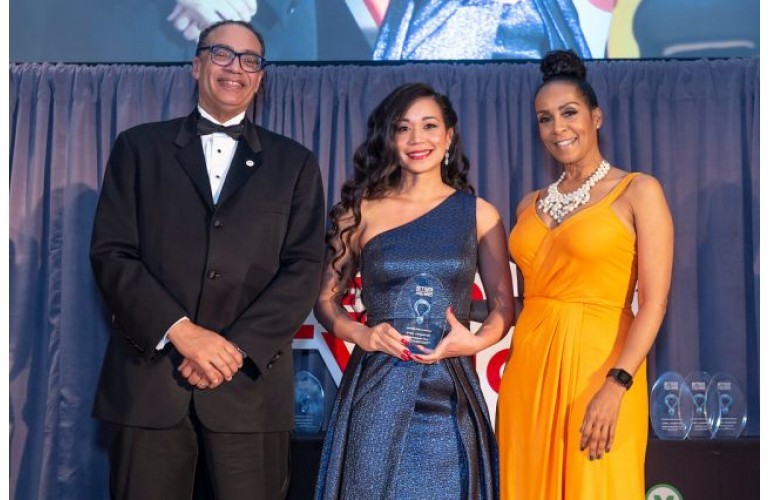 Dr. Lara Thompson (center), a scholar at the University of the District of Columbia (UDC) was recently honored as an HBCU STEM Innovator at the annual Black Engineer of the Year Awards (BEYA) Conference.

Almost everyone has, at some point in their lives, experienced a fall or know someone who has. Falls and aging are relevant to every person reading these words. Because we live in a rapidly aging world, there is a need for research and researchers in the areas of next-gen biomedical solutions.

Why is this such a pressing concern?

In 2015, 8.5 percent of the global population consisted of people aged 65 or older. By the year 2050, that number is predicted to double to nearly 17 percent. Fall death rates have linearly increased between 2007 and 2016, and they will continue to increase as people get older. Moreover, despite an escalating elderly population, there is an insufficient number of medical clinicians available to meet the needs of health services.

A shrinking workforce, rapidly aging population, financial pressures, and increased consumer demand may translate into severe personnel deficits, as well as limited healthcare solutions. As such, it is important that we expose and engage future and prospective doctoral and medical students to global health issues, such as those tied to aging, earlier on in their careers. This can (and should) happen as early as the undergraduate level. Doing so will lead to a greater understanding and stronger motivation for them to pursue health-related careers tied to aging.

It is imperative that researchers of the future be knowledgeable and skilled in the care of older individuals. Currently, the majority of global and public health training happens when students have already chosen their specialization area. It is pressing that the next generation’s research workforce on aging be cultivated to include diverse groups.

The share of the total population between 2016 and 2060 shows that Hispanic, African American, Asian, and mixed-race populations are projected to increase, but the white, Non-Hispanic population is expected to decrease. We need to cultivate untapped, underrepresented minority groups and use their talents. That includes diversity with respect to gender, race, ethnicity, physical ability, and socio-economic background.

In general, less than 20 percent of underrepresented minorities who enter the STEM fields pursuing their bachelor’s degree complete their degree in STEM. The challenge lies in how we engage underrepresented minority students about STEM careers while not compromising academic rigor. We want to get students involved; at the same time, we want them to have meaningful research experiences and professional development.

Historically Black colleges and universities (HBCUs) have a role to play in this. They comprise 2 percent of the nation’ degree-granting institutions, but they produce a large percentage, nearly 40 percent, of all African-American STEM degree holders. Also, undergraduate experiences present a unique opportunity to inspire and educate our students earlier on in their careers.

There is a need for educational programs to engage and prepare undergraduate students for careers that improve global health issues such as those tied to aging. Biomedical engineering’s multidisciplinary nature has a critical role to play in meeting this challenge.

It is a relatively new, distinctive, and multidisciplinary field that merges concepts in engineering to solve a wide and diverse array of problems tied to human health. The University of the District of Columbia (UDC) is poised to investigate biomedical engineering devices, designs, and interventions.

UDC offers a distinctive environment in that it is only one of three HBCUs nationwide to offer a Bachelor of Science in biomedical engineering degree. Further, the program places an emphasis on aging-related student research and training.

Within the Center for Biomechanical & Rehabilitation Engineering (CBRE) lab at UDC, we investigate next-gen solutions tied to human balance and mobility. Though we are interested in research involving able-bodied people with and without impairments, we place a specific emphasis on people who are aging. We provide underrepresented minority students an unparalleled ecosystem with resources, equipment, experiences, mentoring, and professional development.

As a local example, Washington, D.C.’s population is comprised of over 30 percent of individuals greater than 50 years old. At UDC we are investigating a new generation of assistive innovative research initiation studies through the National Science Foundation. These studies focus on balance and sensory training of older healthy individuals, as well as people who have suffered strokes. We are particularly interested in how sensory inputs and partial body weight supportive training can impact balance and gait, and how this information can affect an individual’s multisensory integration.

UDC offers unique aging-related research experiences typically only available to students at the graduate level. We also provide an invaluable training experience to underrepresented minority students. Because I believe diverse groups bring diverse perspectives and produce diverse solutions, I have placed an emphasis on the education and training of ethnic minority students and first-generation college students in biomedical engineering at UDC. Diverse researchers will be key in solving the world’s current and future problems tied to health, in particular aging.