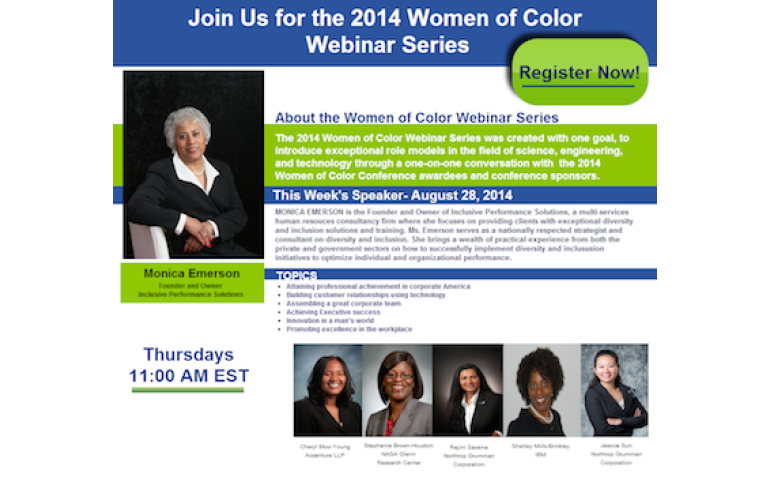 Monica Emerson, national chairperson of the Women of Color STEM Conference, was back on the Women of Color #STEMISAGIRLTHING Webinar Series. Thursday’s episode, the second in the nine-week series, focused on bias in the workplace.

After retiring from her corporate position, Emerson was appointed the first ever Diversity Officer in the U.S. Department of the Navy. Her leadership helped organizations win external awards and recognition for progressive policies, practices and programs in diversity and inclusion.

She is the founder of Inclusive Performance Solutions, a multi-services human resources consultancy firm.

‘Diversity is about more than Business’

Taborn is CEO of Career Communications Group, Inc., the company behind Women of Color magazine and its Women of Color in Science, Technology, Engineering, and Math (STEM) Conference.

Organizations are now focused on what they need to do to ensure diversity initiatives are effective, she added. “More than having programs and spending money, it’s really looking at results,” Emerson said.

Applying the late New York senator Daniel Moynihan’s wisdom in a seminal essay “Policy vs. The program” Taborn said, “The test of a program, when this program is part of a policy is not input but output.”

A lot of employers follow EEOC laws, Taborn explained. “But there is a bias that students and graduates from historically Black colleges and universities (HBCUs) or women are not as prepared.”

The Equal Employment Opportunity Commission or EEOC is the agency of the U. S. government that enforces federal employment discrimination laws.

“Programs may not be delivering results they want,” Emerson observed. “Oftentimes bias manifests in the way people are treated. If we’re getting different results we need to examine what’s going in the culture,” she said.

Lots of employers have made progress Emerson noted, but organizations should continue to examine past decisions and patterns, evaluate and report outcomes with greater transparency.

“Companies should recognize they’re operating in a global marketplace,” she said. “One of the reasons we’re seeing an elevation of corporate diversity officers as employers seek to attract, recruit and retain talent around the world.”

Emerson added that although workforce education and training provide a safe environment and human resources play a major role in inclusive outcomes, individuals have a responsibility to examine their own biases. Online tests such as Harvard’s Project Implicit help one find out implicit associations about race, gender, sexual orientation, and other topics, she said.

“People can protect themselves from negative bias by armor proofing their career,” she said. “Use it to your advantage and see it as a major resource,” she advised.

“Ensure your performance is top notch at all times. Have the right mentors- someone in your field or with similar life experiences to get feedback,” she said.

Engagement is a key factor

Although organizations must work to engage the employee and create conditions in which employees offer more of their capability and potential, studies show that an engaged employee experiences job satisfaction, organizational commitment, job involvement and feelings of empowerment.

To achieve all of those, Emerson advised: “Take on leadership roles. Do that even if you’re the only one and build a strong network of sponsors,” she said.

Emerson has received numerous awards for her accomplishments including the Women of Color STEM Lifetime Achievement Award, and the Women’s Automotive Association Spirit of Leadership Award.

She has also received the Presidential Diversity Award from the National Association of Women Business Owners, a listing in “Who’s Who in Black Detroit,” a Women of Influence award from African Americans on Wheels Magazine and Oakland University’s Odyssey Award for her contributions to building a diverse society. In addition, she was inducted into the National Women’s Leadership Hall of Fame. Collectively, all of the awards highlight Emerson’s impact on a global and diverse society within and outside of the automobile industry, auto channel dot com said.

The Women of Color STEM Conference will be held October 15-17, 2015 in Detroit, MI at the Detroit Marriott at the Renaissance Center. The event is sponsored by Consumers Energy, General Dynamics. Corporation, and co-hosted by Prairie View University and Oakland University.