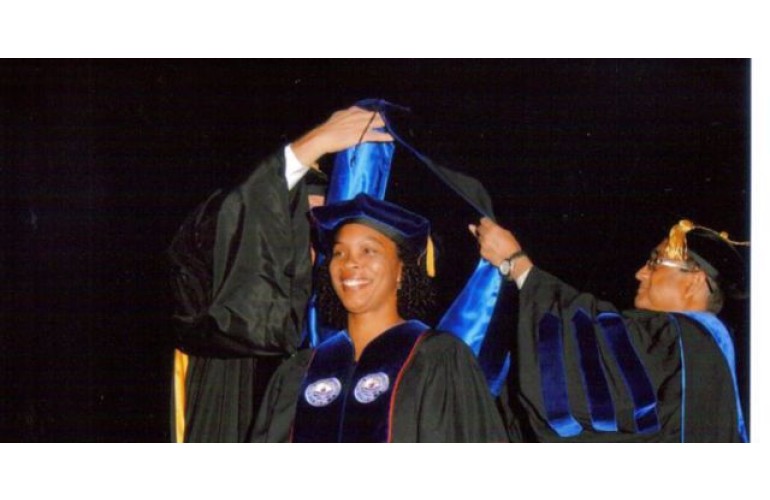 U.S. Navy ships are typically made from metal. However, current enemy technology is able to detect metal, making our ships vulnerable to terrorist attack.

Thanks to Felicia Powell, the Navy is exploring the use of composites for modern shipbuilding. However, more research is needed because layered materials used in cars and sporting goods such as tennis racquets–which work well in dry environments–fall apart in water.

“My research question expanded into a dissertation with the investigation of dual inclusion of nanoparticles in the resin, as well as the carbon fibers to improve performance properties,” Powell says.

At press time, Powell was looking to start a career in the industry. She wants to research how to apply nanotechnology materials background to deep-sea technology and/or green energy.

This could effectively make our ships “disappear” when searched by the enemy using metal detecting technology.  A stealth Navy would be a decisive advantage to the United States military forces in both conventional and counterinsurgency operations.

Powell’s intrepid journey to a doctorate started at Prairie View A&M University more than 13 years ago.   Powell told US Black Engineer & Information Technology magazine, which she has been reading since high school, that after earning a bachelor’s degree in mechanical engineering at Prairie View A&M she felt prepared to pursue what she calls her “third-grade dream of designing manned submersibles.”

At 8 years old, during a grade school lesson on the Earth’s continents, she says, “We were looking at an old outdated map, and as we talked about the depth of oceans and dark spots (underwater sinkholes), I thought, how cool it would be to go to the bottom.”

Her motivation grew when she found out that there really were vehicles for such underwater adventures from watching science documentaries and television shows. In 2000, armed with a diversity-minded McKnight Fellowship from the Florida Education Fund, Powell enrolled in a fast-track bachelor’s to a Ph.D. program, with autonomous underwater vehicles as her focus of study. By the summer of 2001, she had completed six internships with FAU’s Harbor Branch Oceanographic Institute, designing and working with manned submersibles.

However, she recalls, “As the doctorate progressed, the curriculum differences between my bachelor’s and graduate programs resulted in academic challenges.”

In 2004, when she had passed all required courses and her qualifier exam, the focus in her department had shifted from underwater vehicles to naval research. She had also gone through three advisors.

Under the advisement of her fourth, Powell began research into applying Kalman filters and neural networks as a ‘black box’ system identification model to advance control technology of small vessels required in the Navy’s Sea Power 21 Sea basing.”

Powell explains that it’s often hard to tell where a ship is exactly when it is in operation.

“In the olden days,” she says, “you had sailors who could read the positions of stars. But now, people rely on electronic sensors to gauge wind speed, wave speed and just how fast a boat is going. The U.S. Navy was looking to have its naval bases in the ocean as opposed to land, and it needed to know how closely boats could berth next to the other.”

By the fall of 2008, the department advised that Powell would be required to earn a master’s under a new advisor in a totally new field of study.

Undaunted by both the personal and academic setbacks, Powell began conducting research “using nanotechnology to increase the durability and interlaminar properties of composites by treating the carbon fiber surface with polyhedral oligomeric silsesquioxane (POSS) nanoparticles, with an increase of shear strength by 25 percent and reduction of water absorption by 30 percent.”

Powell is the very first African American to earn a Ph.D. in ocean engineering at Florida Atlantic University (FAU) in research, development, and operations pertaining to oceans. FAU places special focus on the development of marine and coastal issues, biotechnology and contemporary societal challenges.

Established in 1984, the Florida Education Fund’s McKnight Doctoral Fellowship Program has increased the number of African Americans who have earned Ph.D.s in crucial disciplines where African Americans have not historically enrolled and completed degree programs.

More than 300 fellows have graduated with Ph.D.s, in an average completion time of five and a half years. The Florida Education Fund has awarded more than 750 fellowships to African Americans and Hispanics pursuing Ph.D.s, and the program enjoys an impressive near 80 percent retention rate.

Congratulations Dr Powell! I was the first African American to receive a doctorate degree in Naval Architecture & Offshore Engineering (Ocean Engineering). I received my doctorate at University of California at Berkeley in 1993. Glad to see I am no longer the only one!!