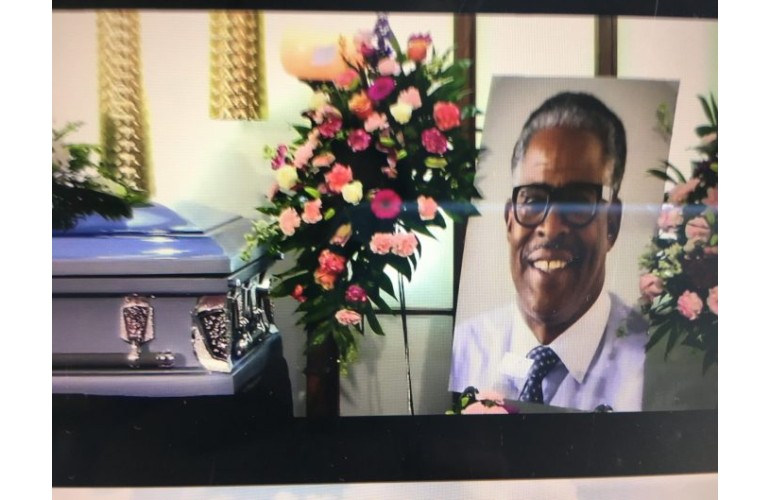 Family and friends of the late Dr. Gary L. Harris gathered today to pay their respects in a funeral service they shared via webcast. “He will live on because of what he taught others,” the preacher said. A recitalist comforted the small congregation with “If I Can Help Somebody as I Pass Along, then My Living Will Not be in Vain,” a song written by Alma Bazel Androzzo and made famous by Dr. Martin Luther King and  Mahalia Jackson.

In a letter by Wayne A. I. Frederick, president of Howard University, where Dr. Harris served recently as the dean of the Graduate School and associate provost for research, Dr. Frederick shared the trailblazing story of Professor Harris with the Howard University Community.

The letter reads in part:

A native of Colorado, Dr. Harris received his Bachelor of Science and Master of Science degrees in electrical engineering from Cornell University. He was then one of the first two African-Americans to receive a Ph.D. in electrical engineering-electro-physics from Cornell University, along with Michael Spencer. He served as an associate with the National Research and Resource Facility for Sumicron Structures (NRRFSS) and was a visiting scientist at the Naval Research Laboratory. In 1980 he became an associate professor at Howard University in the Department of Electrical Engineering, College of Engineering. Rising to the rank of full professor, Dr. Harris was a distinguished scholar and researcher focusing on semiconductor fabrication of electronic and optical materials. A prolific author, Dr. Harris published more than 100 peer-reviewed scientific articles, edited five books and presented more than 200 papers at scientific conferences. He also mentored and advised the research theses and dissertations of more than 150 master’s and Ph.D. graduates.

As key scientist of the Howard Nanoscale Science and Engineering Facility (HNF), Dr. Harris led his colleagues in creating the NanoExpress. The NanoExpress is a mobile, state-of-the-art laboratory exhibiting some of the latest science and technology at the nano dimension in a variety of disciplines. With his signature mantra, “People can’t do what they can’t imagine,” the mobile center is about expanding the scientific imagination of people from “K [kindergarten] to gray.” The NanoExpress has visited schools in the capital area, participated in the USA Science & Engineering Festival and occasionally taken a tour up and down the East Coast. Dr. Harris would note with pride that, each year, the NanoExpress served more than 10,000 visitors.

Dr. Harris served as dean of the Graduate School from 2012-2019 and concurrently as the associate provost for research and graduate studies. He was the first dean I appointed as provost. He also oversaw the expansion of the Edward Bouchet Graduate Honor Society and the implementation of programs supporting graduate student funding, including the Just-Julian Research Fellowship. Under his leadership, the University dedicated the Interdisciplinary Research Building (IRB), home to researchers from departments throughout the University. Dr. Harris also served for many years with distinction as a University marshall during commencements, convocations and other key events.

An ardent advocate for science education, Dr. Harris was also active in various media outlets. He was heard weekly on “Homepage,” the one-hour technical news-talk show on 1450-AM (Washington, D.C.), 1010-AM in Baltimore and nationally on 169, the XM satellite radio band. Seeking to promote science, engineering and technology to a wider audience, in December 2011, Harris launched a technical news-talk show, “Nano Talk,” on HUR Voices on Channel 141 through Sirius XM. He also worked on television productions. “Chips are for Kids” and “Safety First” was featured on the PBS special “Stuff of Dreams.”

We are grateful for Dr. Harris’ many contributions to the University and indebted to his commitment to science education. The Howard University community will continue to keep the Harris Family, including his wife, Dr. Jennifer Harris, my medical school classmate, and their children, in our thoughts and prayers. The University will conduct a ceremony in honor of Dr. Harris’ life at an appropriate time to be scheduled in the future.