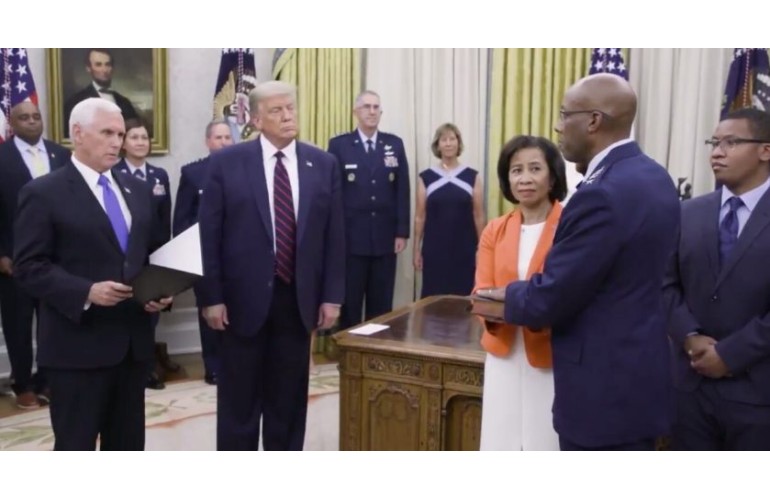 In 2015, the BEYA Stars and Stripes Committee nominated then Air Force major general Charles Q. Brown Jr. to receive the Stars and Stripes Award. Brown was serving as director of operations, strategic and nuclear integrations headquarters, Ramstein Air Base, Germany.

Stars and Stripes awards recognize top-performing Black general and flag officers, and members of the federal Senior Executive Service. The Stars and Stripes dinner is held concurrently with the BEYA STEM Conference.

On August 4, 2020, President Donald Trump and Vice President Mike Pence were present at the ceremonial swearing-in of General Charles Quinton Brown Jr. as Chief of Staff of the Air Force in the Oval Office, the White House announced on Tuesday. “General Charles Brown, Jr. was formally sworn in today as the next chief of staff of the @usairforce!” the White House said on Twitter. Vice President Pence retweeted the tweet.

In the video, Vice President Pence administered the Oath of Office.  During his remarks after the swearing-in, President Trump said the ceremony was going to be in a different location, but  he thought “this is the big leagues” and “an incredible occasion” for the general and his family to celebrate at The White House.

President Trump said the general’s unanimous confirmation was an achievement. “But you have had an incredible career, and this is a capper,” the president added. “I just want to congratulate you. And it’s an honor to have you in this very fabled office and to have you in the White House. And thank you very much for being here, and congratulations to you and your family on a job well done.”

Secretary of Defense Esper called the occasion a historic day. “I’m so pleased to have General Brown selected for Chief of Staff of the Air Force. Thank you, Mr. President. A great choice. And I know he’s going to lead our Air Force well into the — into the next century and beyond.”

Outgoing Air Force Chief of Staff Gen. David L. Goldfein said the day was “a little bit of a bookend” as he hands over to retire on Aug. 6. Goldfein served for more than four years as the service’s top officer and a member of the Joint Chiefs of Staff.

Gen. Brown said he appreciated the honor to be back in the Oval Office after his interview earlier in January 2020. Speaking to President Trump, he said,”I appreciate the trust and confidence from you, the Vice President, Secretary Esper, and Secretary Barrett, General Goldfein, and the rest of the Air Force leadership. It is a distinct honor for me to have this opportunity,” Brown said.