Giants on whose Shoulders they Stand 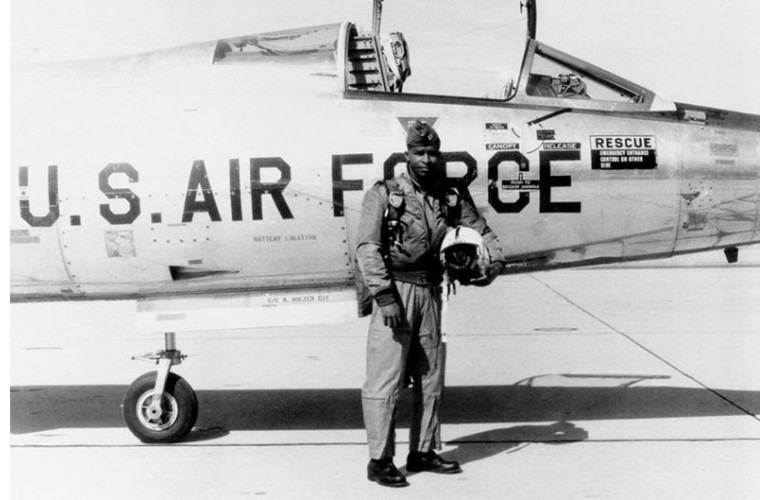 Not a lot of people remember Robert Henry Lawrence. But had he lived, he would have been one of the first NASA astronauts in space.

To help keep his legacy alive, the Astronauts Memorial Foundation held a tribute to mark the fiftieth anniversary of America’s first black astronaut at NASA Kennedy Space Center on December 21, 2017.

During the tribute, former NASA Administrator Charlie Bolden said Air Force Maj. Robert H. Lawrence “was undeterred by segregation and discrimination that he would find at every turn.”

Born in Chicago in 1935, Lawrence graduated from high school at 16, earned his bachelor’s degree in chemistry from Bradley University at age 20 and became an Air Force officer and pilot at twenty-one. Lawrence also earned a Ph.D. in physical chemistry from The Ohio State University in 1965.

After completing the Air Force Test Pilot School in 1967, he was assigned to the Manned Orbiting Laboratory (MOL) program, the only laboratory astronaut with a doctorate. Lawrence was a member of the third group of aerospace research pilots for the MOL astronaut program.

MOL was a joint project of the Air Force and the National Reconnaissance Office, and it was planned to work from mini-space stations in Earth’s orbit, occupied by 2-man crews for about a month at a time, launching and returning to Earth aboard modified Gemini capsules.

On December 8, 1967, while serving as an instructor for another pilot practicing landing techniques later used in the Space Shuttle program, Lawrence died following the crash of an F-104 Starfighter supersonic jet on at Edwards Air Force Base. Although both men ejected from the crash Lawrence did not make it. He was survived by his wife Barbara and son Tracey.

In September 1997, in tribute to Lawrence’s outstanding accomplishments as an American space pioneer, the crew of the Space Shuttle Atlantis carried his MOL mission patch into orbit during the STS-86 mission. The flown patch was presented to his widow.

On December 8, 1997, the 30th anniversary of his death, Lawrence’s name was engraved in the Astronauts Memorial Foundation’s Space Mirror at Kennedy Space Center Visitor Complex, which honors astronauts who made the ultimate sacrifice for their space programs.

On the 50th anniversary of his death, the NASA ceremony held in his honor was attended by former astronauts, air force and NASA leaders, fraternities, and students–future scientists, engineers, technologists, and astronauts. Click here to watch.

Robert Lawrence’s ground-breaking accomplishments continue to be an inspiration, showing that excellence knows no color.