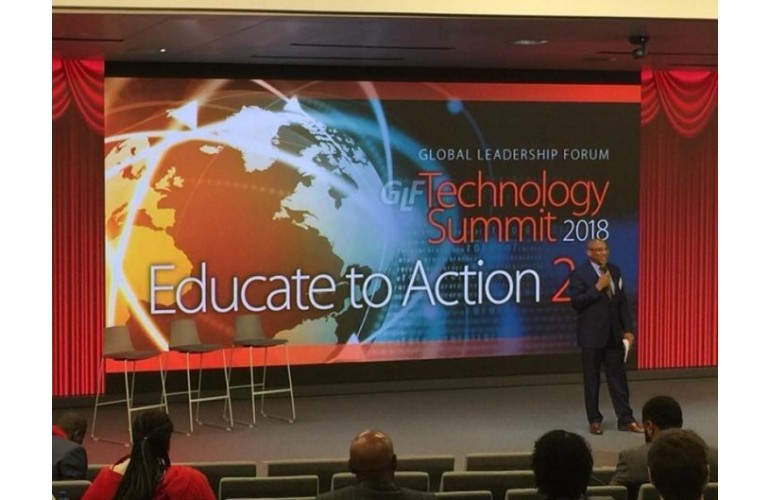 Before a grand idea can be put into place, it needs a solid foundation. For Kendall Norris, CEO of Global Leadership Forum (photo inset), this is a guiding principle in the leadership of the forum, which he has headed since 2017.

GLF is the brainchild of David Steward, the founding chairman of World Wide Technology (WWT), a technology solution provider with more than 5,000 employees.  The forum’s mission is to, with the aid of its partners, inspire interest in young African Americans in science, technology, engineering, and math as well as help older individuals obtain the education and experience necessary in these fields to advance to senior positions.

For the past year, GLF has been focused on getting its house in order. Based in St. Louis, Missouri, GLF reached an agreement with the United Way of Greater St. Louis for office space and outsourced several key functions to United Way as well. Grant writing, research, and technical support are now provided by United Way personnel.

“During my first year, we were still kind of a startup company,” said Norris, “putting things in place updating by-laws. That’s a very big help for us,” said Norris.

GLF’s partners are Black Data Professionals Association, Black Women in Science, Information Technology Senior Management Forum, Career Communication Group, NPower, and National Academy Foundation. The leaders of these organizations met in November 2018 for a gathering that included a day-long “rubber meets the road” meeting to start discussions on the fundamentals of GLF.

“You don’t want to go willy-nilly creating a bunch of partnerships, without having that formality in place to make situational decisions on which we can build and grow,” said Norris. “Before now it’s been an informal partnership based on the idea that we’re greater together than anyone single-handedly. We can have more impact, more influence, mobilize funding, and bring others to the fold.”

The leaders agreed to have representatives to be part of GLF’s advisory board, and those board members have been meeting twice monthly hammering out issues about governance of GLF and developing a road map for moving forward.

“They have been tasked with defining the structure around this organization,” said Norris.

Despite focusing on its structure, GLF has not neglected those it was formed to help—young people. GLF held its annual summit this year on April 17 at WWT’s headquarters in St. Louis, and in addition to educators, corporate leaders, entrepreneurs, and politicians, students were also present and a part of the program. A robotics team showcased its robots, and four high school students, as well as a recent graduate of an NPower program, were panelists in a discussion entitled ‘Let’s Listen.’

Norris said it was important to have the “grown folks listen to the students. It was the most powerful discussion of the day.” According to Norris, the students shared their aspirations and their needs, and a common theme that the students spoke about was being heard (“They feel talked at without being listened to”), mentorship, and an interest in trying new things.

The summit, which attracted an audience of 150, featured a breakout session that addressed topics such as racing innovation, the future of social change, leadership starting at the top, and reinventing early education. The next summit is scheduled for April 9, 2020.

When David Steward (2012 Black  Engineer of the Year) and founding chairman of World Wide Technology envisioned Global Leadership Forum (GLF), he had an idea to connect leading organizations in science, technology,  engineering, the Arts and math (STEAM), who are educating, empowering, and transforming under-served communities, and building tomorrow’s workforce. Together, they would enable the transformation of underserved communities around the world.

Black Engineer magazine celebrates members of these organizations who best exemplify the values and missions of GLF and their organizations.

Viola Maxwell-Thompson
President and CEO
Information Technology Senior Management Forum (ITSMF)
Viola Maxwell-Thompson is a former executive with Ernst & Young, LLC’s Management Consulting Practice, where she specialized in organizational development and tech deployment. Since taking the helm at the Information Technology Senior Management Forum (ITSMF) in 2004, she has supported the creation and launch of ITMSF’s Leadership Academy and “IT Executive Achievement Awards” to honor industry leaders with results-driven diversity initiatives.

Terry Morris was elected national president of the BDPA in August 2017. He is the director of IT medicines at Eli Lilly and Company and has been providing information technology solutions in the medicine development unit for over a decade. Morris graduated from the Florida A&M University in 2000 with a bachelor’s degree in computer and information sciences. He also has a master’s degree in public affairs.

NAF attracts talent, based in large measure on its mission of making students career-ready. Seeing the impact of the workplace in reigniting career ambitions, JD Hoye has led college and career preparation initiatives at local, regional, state, federal, and now national levels—always driven by the incredible impact public-private partnerships can have on young people and their futures. She joined NAF in 2007.

Erika Jefferson
President and Founder
Black Women in Science and Engineering (BWISE)
Erika Jefferson is the president and founder of Black Women in Science and Engineering (BWISE), an organization that is bridging the leadership gap for black women in the STEM fields. She is product management and business development professional with qualifications in managing large accounts and developing client relationships. She has additional experience in Lean Six Sigma, manufacturing operations, and supply chain management.

Tim Atwell, a technology executive for the ATM channel at Bank of America, joined the company in 2005. He is responsible for delivering customer-focused self-service technology solutions. His other responsibilities include vendor management and software and hardware reliability on more than 16,000 ATMs. Atwell is a graduate of North Carolina A&T State University and has been featured on the cover of US Black Engineer & IT magazine.

Denise Russell Fleming is vice president of IT for BDS. She is responsible for delivering innovative digital solutions to align with BDS’ business strategy. Fleming earned a Bachelor of Science degree in electrical engineering from the University of Virginia and an M.B.A. from Duke University. She was awarded the 2012 Women of Color Technology Award for Career Achievement and is a 2014 inductee into the BEYA Hall of Fame.

Latasha Gary provides support to a wide variety of businesses and functions. Gary is responsible for leading large-scale ERP implementations and portfolio management. She is recognized in the industry for solving complex problems across diverse business units on time and within budget. Gary received her Bachelor of Science degree in computer science from Texas A&M University and a Master of Science degree from Howard University.

Michael Cato serves as senior vice president and CIO at Bowdoin College. Michael facilitates all aspects of information technology strategy, fosters innovation, and guides the institution to discover new ways to use technology to support its mission. Cato earned his M.B.A. at Wake Forest University and his Bachelor of Science degree in zoology at Andrews University in Berrien Springs, MI.

Jerry Fox Jr. joined the BJC team in 2017. Fox is an innovative information technology executive with over 30 years of experience. Some of Fox’s responsibilities include planning, developing, and supporting information technology and telecommunications initiatives throughout BJC’s hospitals and service organizations. Fox holds a bachelor’s degree and M.B.A. from Ohio University in Athens, OH. He is also an active volunteer with the IT Senior Management Forum.

Sabina Ewing’s impact on Pfizer is evident in the numbers. As a company vice president and a leader in technology, Ewing has successfully delivered enterprise solutions and capabilities impacting 90,000 employees across 95-plus countries. Her team of employees and contractors provide 24/7, year-round support for more than 100,000 users around the world. Ewing also serves as the chair of Pfizer’s Global Women’s Council.

Michael Sullivan is a technology executive with over 30 years of experience across multiple industries. Sullivan can implement transformative technology strategies across complex organizations. He is skilled at building relationships with business partners and helping them to use innovation to strengthen the business and achieve objectives. He also has experience integrating new technologies to streamline processes and improve productivity.

As CIO, Kevin Summers has responsibility for Avnet’s global IT strategy and enterprise effectiveness initiative. He leads the company’s global information solutions team and sets the IT roadmap strategy that helps differentiate Avnet as a technology leader. He also has oversight to ensure implementation and synergy of systems and processes across the organization. Summers received his Bachelor of Science degree in computer science from the College of Charleston and an M.B.A. from Duke University.

SaLisa L. Berrien is the founder and CEO of COI Energy. In 2013, she established the COI Ladder Institute to focus on delivering leadership and empowerment services to millennials and women to elevate their careers or businesses to the next level. Berrien has also created several scholarship funds for high school and college students. She holds a degree in mechanical engineering from the University of Pittsburgh and an executive M.B.A. from Saint Joseph’s University.

Alicia is the founder and CEO of Equilibria, Inc., a 14-year-old operations management firm specializing in business infrastructure for fast-growing companies. Equilibria is currently the world’s largest and most comprehensive repository on business infrastructure for small businesses. Pierre has a B.S. in chemical engineering from Louisiana State University and an M.B.A. from Tulane University. She is the host of the Business Infrastructure: Curing Back Office Blues podcast and the author of Behind the Façade: How to Structure Company Operations for Sustainable Success.

Lakiesha C. Tomlin is a flight test engineering department manager at Northup Grumman Corporation. In her role, she provides technical leadership to programs in the areas of electronic sensor and radar systems. She also regulates the department budget of nearly $1 million in the capital, material, and labor expenditures. Tomlin holds a Bachelor of Science degree in mechanical engineering from St. Louis University and a Master of Science degree in technical management from Johns Hopkins University.