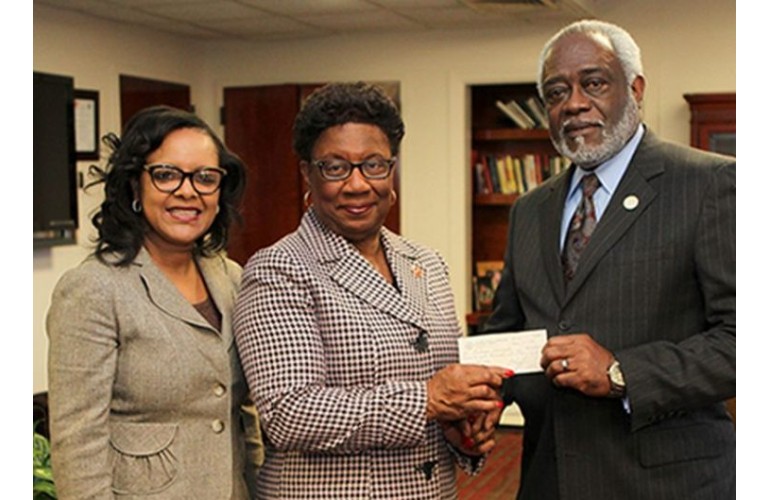 More than 50 years ago, Floyd earned his architecture degree from Tuskegee in 1966 and his wife, Nathalie, also completed a degree in biology the same year.  Following in their footsteps, the couple’s two sons and a grandson are also Tuskegee University alumni.

Brian, who is a colonel in the U.S. Army, graduated in architecture in 1989, and Eric earned a bachelor’s degree in mechanical engineering in 1990. Most recently, a grandson graduated with a degree in psychology in 2016.

“Tuskegee University means a great deal to both of us, not to mention our entire family,” Floyd said. “Although we have given to Tuskegee for decades, we felt we wanted to do more for ‘Mother Tuskegee’ and her students.”

Together, the couple has contributed more than $100,000 in philanthropic support to the university during their lifetime. Griffin hopes this gift inspires both his immediate family and members of the Tuskegee family to make a gift — especially when extra incentives like year-end tax deductions make giving more beneficial to everyone. Griffin, who also serves on Tuskegee’s Board of Trustees, retired as a small-business owner — a career preceded by serving as a colonel in the U.S. Army, state senator, and mayor. Nathalie was an educator before her retirement.

“We hope our gift inspires our sons and other members of the Griffin family to establish their own legacies of giving to Tuskegee,” he said. “We also hope it encourages other alumni and friends to continue their commitment to giving — or to start that tradition this holiday season with a donation to the university.”

After the Griffin Family Endowed Scholarship is fully invested, it will generate merit-based scholarship support for either an architecture or construction science student.

To qualify for the scholarship, a student will have to have graduated from a Georgia high school, as well as have and maintain a specific grade point average.

“Merit-based scholarships are particularly helpful in our school’s efforts to recruit and retain the best and brightest students,” said Dr. Carla Jackson Bell, dean of the Taylor School of Architecture and Construction Science. “Our school competes for students globally, and having these resources are vital to maintaining an accomplished student body.”

Endowments, which are established with gifts or pledges of $25,000 or more, support scholarships, faculty professorships, academic programs and campus facilities. In return, donors can name their endowments in honor of themselves or someone of their choosing.

Furthermore, these endowments can grow through supplementary gifts of any amount made by the donors, as well as their family and friends. Because endowments are invested and managed by the university — with only the generated interest income used for their designated purposes — they grow and provide permanent, self-sustaining sources of funding for Tuskegee in perpetuity.

“Endowments are vitally important to Tuskegee’s future and allow donors to establish a lasting legacy,” said Don Winston, Tuskegee University’s interim vice president for advancement and development. “We are grateful to the Griffin family for making Tuskegee such a priority in their ongoing and year-end giving. We hope their generosity encourages more of our alumni to follow their example.”

To make a year-end, tax-deductible gift, donors may give online at www.tuskegee.edu/give, or by downloading, completing and mailing a Donor Gift Form.

Donations must be posted to a credit card or postmarked on or before Jan. 15, 2018, to qualify as a donation during the 2017 tax year. For information about creating an endowment to benefit the university and its students, contact the Office of Development at 334-727-8540 or contributions@mytu.tuskegee.edu.